19 Months Later: Progress of the true Mass in Europe

My eyes surveyed the crowd, looking for a dear friend who is also the chapel coordinator for the Budapest mission. I had last seen him and his family in December 2015, for the tail end of the TR annual staff meeting, part of which took place in Hungary. But the first time Bishop Sanborn had visited Budapest was 19 months earlier. I continued to scan the sea of Magyar faces; then, my eyes connected with him. One of his party revealed a sign that displayed the bishop’s coat of arms. I wheeled the bishop's luggage forward and we made our way through the crowd and stood in front of three adults and six children, most of whom started singing (the two youngest found refuge in their mother’s skirts because of their shyness).

They were singing a beautiful Hungarian folk song. I felt the color come to my face: not out of embarrassment, but out of genuine pleasure. It was a welcome befitting the bishop, who had come so far to affirm Catholic souls in their Catholic faith. The translation into English is roughly thus:

The sky is exulting cheerfully with praises,
The sun is shining with its rays, with its pure light,
The stars brighten up, the glooms dip,
Everybody is singing with joy.

We are also coming here to honor you,
Since we cannot present a worthy gift,
We wish with all our hearts: God may invigorate you,
May He grant you blessings of the body and the soul.

This was to be the start of the final three days of an excellent European visit for the bishop. On Saturday he gave Confirmations after Mass, and then proceeded to give two outstanding conferences to a very large hotel conference room, on the Buda side of the Danube. We had 100 attendees for the first talk, a very scholarly presentation examining the insidious movement over the centuries to combine all religions. Eighty stayed for the second talk, which was shorter and focused on why a true Catholic cannot stay in the Novus Ordo. Both presentations were simultaneously translated into Hungarian for the audience. You can learn more about our Hungarian outpost here. The video of all these talks will be available on True Restoration Media, accessible by all TR Annual Members, in the next thirty days.  In the meantime you can see some photos here.

On Sunday after Mass, the bishop interviewed a potential Polish seminarian and did an informal Q & A session for the core of the Hungarian chapel. When I say “core” I mean the regularly observable 10% of any given parish that does everything: picking up and returning clergy who travel by plane or train, maintenance and cleaning of linens, setup and break-down of the altar and "pews," flowers, cleaning, arranging for "coffee and donuts," collection, altar serving, singing, and oh, yes, the money – they often personally make up the difference between the total costs and the amount of the collection. I’ve attended the True Mass on four continents and in over thirty locations and I can attest that this 10% is pretty accurate (it can sometimes be as low as low as 5% or as high as 20%). Will my mentioning this observation change that percentage? Probably not. But I do want to pay tribute to those who make the true Mass possible in such evil days. They are the ones who are making the most of their time (Eph V: xvi). Spare a thought for them the next time you simply show up for Mass, go to Confession, and then leave without offering any help. If you can’t be bothered to help at your parish, wherever you are in the world, perhaps make it up in your tithe. Again, I speak with no authority, but simply am offering a gentle exhortation, from one layman to another.

Indeed, because of my knowledge of what it takes to “put on” a mission Mass, I am constantly impressed by the simple beauty of our weekly Sunday High Mass here in Paris. A small brigade of people transform a humble hall into, at least for a few hours, a resting place for Our Lord. On the Friday morning before we left for Budapest, Fr. Jocelyn Le Gal, of the IMBC, had given the Bishop an opportunity to say Mass at the Paris chapel (a much smaller venue that seats only about 50, which is why we are often in a hall on Sundays) in the 15th arrondissement. It was a First Friday and as such a flock of 15 managed to come out for a 08h00 weekday Mass, a time usually too late for the workers in the city.

It had been a good week in my beloved France as well. The bishop gave a conference in Brittany about the false principles of the Society of St. Pius X. If your French is good, or you have French friends, feel free to listen or pass it on yourself. 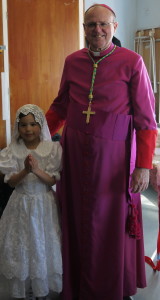 accepted for the coming academic year). This young man was accompanied by another friend and Fr. Eric Jacqmin, (formerly of the SSPX, but now a non-una-cum sedevacantist pastor of a small flock in Brussels), who came down to Paris to meet the Bishop and get to know him a bit better.

But the week of work had begun in London the weekend before. We had almost 50 people there for Easter Sunday, and more may be coming for future Masses. The bishop even had a first communicant!  If you want to learn more about the good work of the London mission, click here.

Both London and Budapest were small upstart possibilities 19 months ago, but now they are serious and ongoing missions, populated by many children.  They both represent just two tiny beacons of light on a continent continuing to bow and scrape before the menace of the Crescent. I have no doubt that in another twelve months – or sooner – I will have even more exciting news to share. 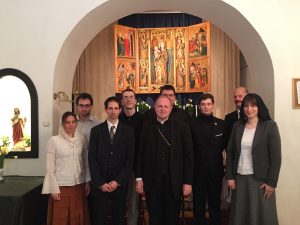