One of the many evils that has come as a result of Vatican II has been the destruction and perversion of many religious orders. Thanks to God, the true priesthood has been preserved and several convents for religious sisters have been established since, but when was the last time we saw a religious community of brothers? Once in a while you might see or hear of a religious priest or brother who has come from here or there, but many places are still lacking establishments for the once-common purpose of secluding oneself from the world, in pursuit of God. Yet, not all religious orders have been brought to desolation. Although they may be few and far between, they are not altogether nonexistent. In fact, some have persevered and even grown in number despite many contradictions. 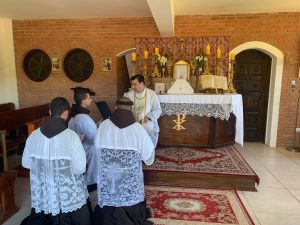 A certain order in particular has been brought to our attention, whose members have been studying and working hard for the glory and honor of God and are in need of our prayers and our charity. A thriving community of friars, in South America, has recently come to embrace the sedevacantist position in recognition of true Catholicism. After renouncing their previous “R&R” position, these resilient friars are growing with the help of the traditional Catholic clergy. With the little support they receive to make ends meet, these brothers would be grateful for any contributions you can offer them to assist their cause as they advance towards the priesthood. Here one of the friars speaks on behalf of his brothers to further communicate their plight:

“We are a Franciscan community in Brazil that lives at the Seminary of Saint Joseph, Atibaia, São Paulo. Friar Peter Maria, our superior, was formed by Friar Paulino of the Heart of Jesus, receiving from him and from other old friars the Franciscan customs. The community started to live with Father Rodrigo Maria, a priest that had been ordained to the Resistance in the end of 2017 and, in 2018, they broke up with the Union Sacerdotale Marcel Lefebvre (Resistance). The reason for the separation was the recognition of the errors of the R&R position and, thus, the adherence to sedevacantism (totalism). Father Rodrigo and the community contacted Bishop Daniel Dolan and received a pleasant answer. Some months later, in 2019, Father Rodrigo opened the Saint Joseph Seminary and the friars started to study for the priesthood. Since the adherence to sedevacantism, the community received three more friars.

The actual members of the community are:

With solemn vows: Friar Peter Maria (Guardian of the community and Subdeacon)

Tertiaries: Some laity, including a secular seminarian (Br. John of Capistrano)

We are especially grateful to our Bishop Daniel Dolan for all the support that he gave us when we made the hard decision of breaking up with an entire structure to embrace the Catholic truth. This little community is some of the fruit of the great missionary work of this bishop.

Currently, besides the studies to the priesthood, the community has been scanning books, translating articles and books about sedevacantism (especially from Father Cekada) and helping Father Rodrigo with his works. Right now we have been having some difficulties due to the lack of regular donations. When we need some help with something specific (for instance, right now we are gathering money for travel and also for the priestly vestments for our superior, who is going to be ordained at the end of the year), we usually get some amount from very charitable people wanting to help us in our projects. But, unfortunately, for the daily expenses, we do not have much to count on. Thanks to God, the Divine Providence has never let us down. We ask your help to improve our situation, but, most of all, your prayers.”

By way of further introduction, the brothers have even provided a short video and some pictures for your enjoyment. How wonderful would it be if we could offer some support to those who are so deserving of our help! If you are able to help these Friars, you may do so by contacting them at +55 31 99737-9252 (Telegram/WhatsApp)!

Catherine Robbins is a parishioner of Our Lady Queen of Martyrs Church in Fraser, MI, who resides with her parents and sister in Windsor, ON, Canada. She is a self taught artist who also enjoys writing, video editing and tutoring young children.