“The bishop sat in lordly state and purple cap sublime,

And galvanised the old bush church at Confirmation time;

And all the kids were mustered up from fifty miles around,

With Sunday clothes, and staring eyes, and ignorance profound.”[i]

We had no “bush church” for His Lordship Bishop Sanborn to galvanise, but the long-anticipated visit certainly put fuel onto the fire of the faith of those who gathered in the home up in mountain bushland for the scheduled events in the Melbourne leg of the trip. To say that His Lordship posed a striking figure while “in state” is the equivalent of commenting that St. Patrick had an effect on Ireland. Some of us had never set eyes on a bishop in state before, or couldn’t remember if we had, so it’s little wonder that, particularly amongst the children, there were dumb-struck tongues and wide eyes galore. However, once His Lordship fell to stroking the household cats I do believe the youngsters began to look upon the bishop as more of a human being and less of some sort of purple-clad spirit. For years, his voice has been resounding within our homes thanks to the internet providing access to his sermons and talks. That the opportunity to meet His Lordship face to face and attend the six Masses, the Confirmations, men’s and women’s Days of Recollection and seminars was taken advantage of by many is no surprise. And so, the flock were mustered up from very far and wide! Hours upon hours of car travel were clocked during that memorable period as people drove back and forth, eager to attend whatever they possibly could. Even two souls made the distance from New Zealand to be present during the week of the bishop’s visit in Melbourne; it did get a little squishy for the home in the bush where the Masses were offered, but you couldn’t have found a happier bunch.

“You’re in charge of the bishop’s drinks,” I was informed prior to his arrival, which meant that when he was sitting at our table, I was to ask what he would like and then serve it. I knew His Lordship is partial to red wine; an Australian bottle of Grenache Shiraz Mourvedre with the appropriate label of “The Holy Trinity” had been procured for his enjoyment. Also, His Lordship said his mother was totally Irish and I could certainly believe it when I noticed his taste for Baileys Irish Cream, not to mention that Hibernian smile. I soon found out, though, that tea was the order of the day - and throughout the week of events, stories, some of which are now almost the stuff of legend in traditional Catholic circles, were bandied about over steaming mugs while laughter shook the table as His Lordship demonstrated his keen wit, first in good-humoured repartee and then by answering theological questions precisely and without hesitation. One day when a group sat at the table with the bishop after Mass it was discovered in conversation that there was a Saint Patrick’s Cathedral in New York as well. Now, we don’t have much along the lines of impressive churches and basilicas out here, but Saint Patrick’s Cathedral in Melbourne (albeit under Novus Ordo occupation) is something in which the Melbournian Catholic takes pride. And so, it began: St. Patrick’s Manhattan versus St. Patrick’s Melbourne. Bishop Sanborn pulled out his phone to search the specifications. Manhattan beat Melbourne easily in length at 120.9 metres to 103.6. Ah, but Melbourne boasts three spires while Manhattan has only two. Taking a look at who lays claim to the highest spire, Melbourne wins the round with a spire height of 105 m. compared to Manhattan’s 100.4! Nevertheless, His Lordship took the wind completely out of the Melbournian sails by bringing the number of resident bells into the equation. Let us draw a veil over this sad chapter and turn the page… 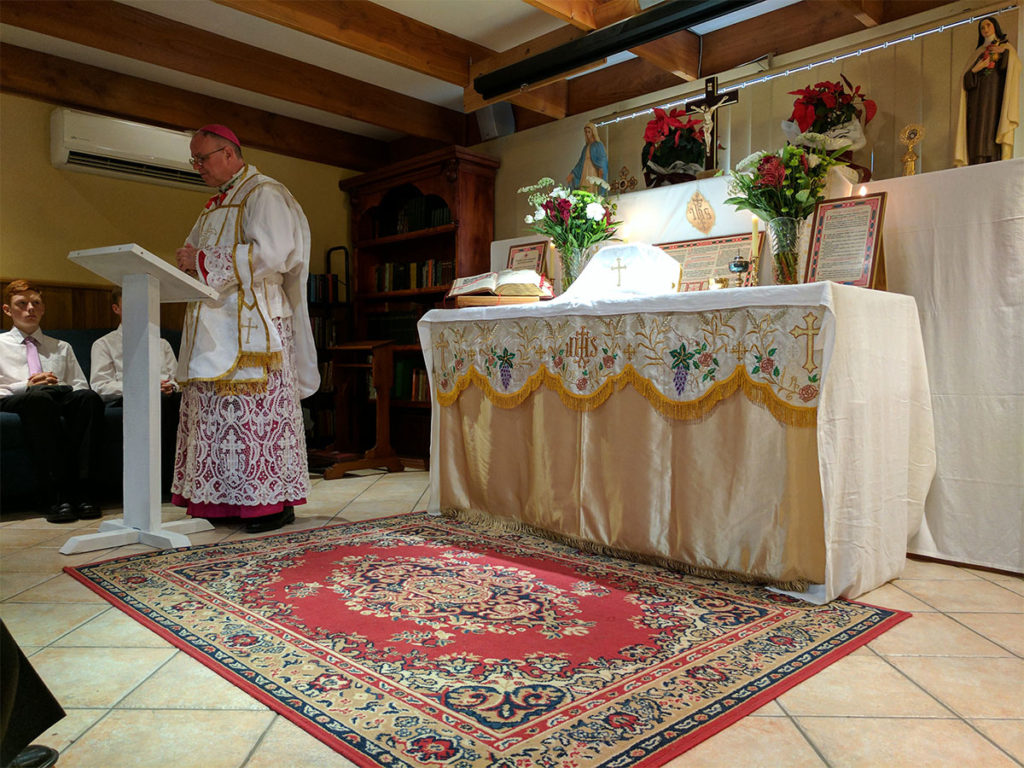 Sunday, January 1st, 2017 was the day of the Confirmations. And what a day it was! The feast of the Circumcision upon which the “Little Gospel” is read ordained it to be even more of a momentous occasion, for this shortest of Gospel readings bears special significance to the Holy Face/Holy Name Devotion which is highly popular among Australian Catholics. Then Bishop Sanborn gave his sermon. Standing before his notes laid out on the lectern, only just built the previous day with its fresh paint glowing stark white, His Lordship’s voice, often heard emanating from a speaker in that very same room, now in full-depth of tone and power exhorted the mustered flock. Typical of his sermons it was excellent and, to put it very briefly, served to “enkindle in our hearts the fire of Thy Love.”

Next on the agenda were the seminars on Monday. If you’ve listened to His Lordship’s conferences which are available on Most Holy Trinity Seminary’s website then you know what calibre of material it was to which we were treated; if you have not heard them, then I urge you to make some time and do so. Tuesday brought the Men’s Day of Recollection, Wednesday both the final Mass to be offered by Bishop Sanborn in Melbourne and the Women’s Day of Recollection. I, for one, got a lot out the women’s day. Most of the attendees are married, but Bishop Sanborn gave those of us who are single plenty of food for thought in regards to what to look for and important considerations if marriage is the goal. There was a noticeable ripple of amusement when His Lordship announced the second topic to be “the most common faults of men.” It is useful to know, without a doubt. Exhortation and encouragement to strive for virtue is applicable to one and all, though, and Bishop Sanborn did not disappoint on this front.

One of the final acts of His Lordship’s office to perform before his departure was the blessing of crucifixes, statues, rosary beads, medals and other religious items and sacramentals. My sisters and I laid them all out on our ten-seater dining table. When His Lordship walked in, missal and holy water bottle in hand, all was hushed for a few moments as he first walked to this side of the table and then to the other, surveying the impressive sight. It was mostly crucifixes that people had brought in order to gain the special Stations indulgence that can only be acquired by having a bishop give the blessing. “I have never in my life,” His Lordship’s powerful voice finally broke the silence, “Never blessed so many things at one time.” And finally, when it came to sprinkling the holy water, the bishop walked slowly around the table with more of a steady pouring motion than a “sprinkle” as it was as thickly covered with religious items as scales on a fish. The tablecloth, we saw afterwards, was pretty well soaked all over and someone made the inevitable comment that “That has got to be the holiest table in the world!”

Thus, the visit came to an end. Bishop Sanborn caught his flight to Brisbane and the flock that were brought together in the great muster, after being ministered to by a successor of the Apostles, the burdens lighter on their shoulders like shorn sheep, dispersed again. May the flames that His Lordship fanned continue to burn bright and strong throughout the rest of 2017 and beyond. What a way to begin the year; Deo gratias!

[i] Beginning of “Tangmalangaloo” from John O’Brien’s book of poems, Around the Boree Log

Genevieve contributes to the True Restoration Blog from her home in the mountain bushland of Victoria, Australia. She was born into a big, Catholic family in which there is never a dull moment.