A History of the Protestant Reformation in England and Ireland by William Cobbett, is a book which, despite a lengthy title, proves itself to instead be named all too humbly.  It must be said however that at first glance, a Catholic, especially a Traditional Catholic may not think twice before deciding against investing any time into it. Perhaps even at second glance also. It is a book written by an English Protestant, for English Protestants, about the history of English Protestantism. To all appearances, a formula rather familiar and rarely valuable, nevertheless, it is this formula which makes the book as valuable as it truly is, and quite possibly so valuable as to make the history written within to be almost a necessity for any Catholic to read. 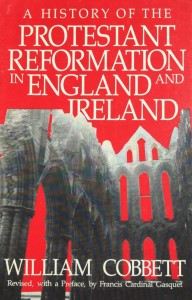 The purpose of the book is in some ways elusive and hard to pinpoint.  The general viewpoint is clear throughout, but every chapter seems to, not only address a period of time, but to analyse it to destroy any misconceptions or lies about it and prove that what he is saying is indeed true in what at the time would certainly have been an uphill battle against the intellectual state of the audience at the time.  And these misconceptions are of such a nature, and are such widely accepted "facts" as to quite likely come as a complete surprise to even Catholics who consider themselves fairly well-informed on the matter.  The purpose as laid out by the author, and as is obvious in the fact of it being a history book: is to narrate history, and to prove that it is indeed true. Yet it goes much further than this, almost to the point of mystery, leaving many questions in the mind of the reader.  Retrospectively however, the purpose of the book is not only as an historical narrative, but also, and possibly more so, as a grand exposition of what he, the author, considers to be a dark and purposefully obscured story of Protestantism, and more especially of the Church of England and all the people who, for whatever motivation, were responsible by their actions for what the author considers to be the most terrible outcome for his people to possibly be imagined.  And this consideration he is able to prove.

The book is unique, in design, in purpose, even quite simply in circumstance and especially in effect. The writing style is one which breaks some hard set laws of writing, and yet without these breaches the book would either be dry beyond tolerance or quite likely be without any value to read. The first thing is the paradox of a historical narrative, the essence of which is generally understood to be impartiality and complete lack of personal input, and the fact that throughout the entire story it is evident, that to the author this is a very personal endeavour. The book The Rhine Flows into the Tiber is for the most part a systemic breakdown and detailing of events and the facts and details surrounding them, but in this book about the history of the Protestant Reformation, the emotion of the author is imbued into every page.  It is clear that he is not simply another author looking to write a book which will receive praise and congratulations as a prime work of literature resulting in much shaking of hands and many expressions of gratitude. Indeed, given the circumstances, it would seem the exact opposite would be the case.  Which leads to the first question.  Why?

Why does William Cobbett write this book?  An Englishman condemning Englishmen, a Protestant condemning Protestants? Because, he is just that, he is a true Englishman, one who loves his country, one who loves his people, not with a false patriotism of unquestionable loyalty, not a false sense of camaraderie, one which causes him to look at the facts of the past, the history of his church, the history of his people, and as a true Englishman, to be outraged beyond self containment.  This is a personal endeavour of the author, and so his person and character becomes the driving force behind every chapter and every page bringing everything into alignment and giving everything meaning.  And as becomes almost a necessity for this book to be as valuable as it should be, we learn very much of his character and of who he is.

He is a man with a sense of justice which has been outraged, with a hatred of evil which has been roused, a devotion to his people which has been animated, and above all, a love of truth which is unable to be overcome.  And so we have it, the grand story of the Reformation.  A story detailing the causes of the Protestant revolt in England, exposing the facts of the actual event, though it spans many years, disproving the army of English Protestant historians who spread, what he makes abundantly clear to be, the most disdainful and self-serving lies that could ever be invented on the matter, and a story exploring the far reaching and disastrous consequences of the entire affair.  He speaks passionately of the most horrible individuals, explaining the motivations which were present for their paths.  He speaks of the suffering of the English, of his people, an entire nation taken from the heights of respect and of power, dragged through the dust of civil war and persecution.  A people who could only watch and weather the storm of a ruling body bent on destroying the legacy of a uniquely powerful civilisation.  And one cannot help but wonder at the composure he maintained, while enumerating the systematic oppression, the creative punishments, and the brutal persecution of people he called his own, for only one crime, as he says, “adhering to the religion of their, and our forefathers as had been held for nine hundred years, and the abjuration of which they would consider to be apostasy.”

The book has a sad side, beyond the most miserable facts contained within.  The purpose of the book is to expose the most terrible and destructive forces and people to have ever threatened his country; to prove through their own inconsistencies and dishonest words that the majority of Protestant writers on the matter are so motivated by selfish reasons and in reality, the desire for self preservation, for if the truth were known and widely accepted, no man of integrity could allow the religious establishment of England since that time to be treated with any form of respect.    And most uniquely, to show beyond all doubt, that the entirety of the terror visited upon England and Ireland was purely and simply for the destruction, persecution, and oppression of the Catholic Church.  And herein lies the sad aspect of it, not for what it is meant to be, but for what it is not.  The resignation of the author is painfully clear.  He knows that his writing cannot bring back the countless innocents who perished, a number so huge that he proves even three hundred years later the population of England had not come close to recovery.  He knows that his people, once regarded, not in government, not in rulers, but in the common people, as the happiest and most wealthy nation in Europe at the time, have had their legacy and their birthright torn from them, which they can never regain.  He knows that the blemish of the past upon his country, a land which tore itself apart, and became a den of thieving pirates and deceptive tyrants can never be expiated and the justice for which the very land of a now broken nation can never be satisfied.

All he can do, is hope that the memory of the past be clear and truthful, that the blood of the innocents be not forgotten, and that the slightest justice that can be given to those victims of the so called “reformation” be sought out and handed to them, with the respect and the compassion which they deserve.  And for the author, yet another casualty of the Protestant Revolt, born a Protestant, and no doubt left uncorrupted by the ideas that proceed, let us hope and pray that at the very least, his love of justice and earnest defence of the True Church was able to merit for him a conversion to what he called, “the Faith of our fathers.”   Let us thank him for being the voice of justice for a time when those who suffered had no voice of their own.  And lastly, it is important for us to keep something in our minds as we read this tragic story of the true Catholics of the time who suffered, the priests who were killed, the bishops who were brutalised, the monks and nuns who were robbed and cast from their homes, the men, women and children who were persecuted and oppressed, even by the law, all these Protestant labelled “victims of popish superstition and monkish ignorance.”

That no matter what our personal heritage may be, as Catholics, these are our people, these are our spiritual ancestors, and the least we can do is educate ourselves with facts found in books such as this History of the Protestant Reformation, to honour their memory and the legacy they left behind; by remembering to pray that eternal rest be granted unto them.  And to those who have already earned their reward, to ask them to pray for us in a time where persecution of a different kind rages throughout the whole world.

True Restoration is pleased to be able to offer this title, for a limited time, at a very competitive price compared to available elsewhere such as here.