A Prism of the Crystallising New-World-Order

Harvard Magazine recently published the article, "The Risks of Homeschooling" by Erin O'Donnell (May-June 2020), which is essentially just O'Donnell's repackaging of some of the opinions on homeschooling of Elizabeth Bartholet, the latter being the public interest professor of law and faculty director of the Law School’s Child Advocacy Program.

Anti-homeschooling articles have kept popping up on occasion, over recent decades, starting off with the general theme that homeschooled children aren’t sufficiently “socialised.” Then when that accusation was proven to be false, the theme moved onto other criticisms such as “homeschooled children are misfits because they are much more highly-educated than their institutionalised counterparts.” None of the arguments served to deter parents from preferring to homeschool, and instead of a decline we have seen an increase. So what makes this article any different?  And is there any relevance to the timing of it?

In answer to the first question, Bartholet takes a fundamentally-different approach; yes she also uses the ad hominem and straw man techniques, but her thesis is not designed to deter a parent from choosing to educate their children at home, rather it aims to incite fear and alarm in the general population towards the supposed risks and dangers to the rest of society from parents who choose to homeschool. Sound familiar? #Covert-19. She “sees risks for children—and society—in homeschooling, and recommends a presumptive ban on the practice.” Sounding more familiar?

As for the second question, given most parents are currently being urged by the government to homeschool, as part of “Social Distancing” it seems a peculiar time for these two Harvard mouthpieces to be launching this, which is apparently opposing what is the temporary course of most dutiful American parents, in support of the U.S. democracy, with such unqualified and suggestive statements, as: “Homeschooling,... may keep them [children] from contributing positively to a democratic society.” And “She views the absence of regulations ensuring that homeschooled children receive a meaningful education equivalent to that required in public schools as a threat to U.S. democracy.” So what is really going on here?

I wasn’t going to even dignify with any response the scurrilous insinuation of parents opting to home school as a means to get away with child abuse or neglect. Oh, that's rich! Yet, for the sake of categorically dispelling that myth, I will mention that in view of the fact that the most notorious paedophile organisations are behind compulsory curricula and the so-called “Safe Schools” types of programmes which make public schools the most dangerous environment for child abuse with their ongoing perversion and systematic corruption of children – truly vigilant parents wanting to protect their children from child abuse are the most likely to choose to homeschool!  Moreover, a parent prone to neglect or abuse their children is the least likely (as a rule) to take on the sacrifices, burdens and tireless responsibility of homeschooling; and is the most likely to take advantage of being able to get rid of their children for most of the time, at the taxpayers’ expense, whilst enjoying the lifestyle that a double income family affords. So, let’s be realistic, if anyone trots out the child-abuse scare-tactic again, you know it’s rubbish and duplicitous.

Back to the guts of this: “Homeschooling, she says, not only violates children’s right to a 'meaningful education … but may keep them from contributing positively to a democratic society.'”  Then this portion is highlighted:

"Children should 'grow up exposed to...democratic values, ideas about nondiscrimination and tolerance of other people's viewpoints.'”

Also: “In the United States, Bartholet says, state legislators have been hesitant to restrict the practice because of the Home Schooling Legal Defense Association, a conservative Christian homeschool advocacy group, which she describes as small, well-organized, and overwhelmingly powerful politically.”

Let’s analyse this a bit:

a). Her central tenet seems to be that parents having the right to homeschool their children is a threat to American democracy and also deprives children of a "meaningful education," including ideas of "non-discrimination and tolerance of other people’s views." What is obvious here is that the author is exhibiting classic psychological “projection” – her discrimination and intolerance towards homeschooling parents is blatant, as is the mendacity! What she states about the Home Schooling Legal Defense Association argues explicitly against them being a threat to American democracy, whilst arguing strongly in favour of such people being ideal candidates to effectively teach such ideologies to their children by their example and capabilities. However, it should be noted that such parents do pose a very real threat to the alternative of a tyrannical ruling body. Given that “absolute power corrupts absolutely” whatever is an obstacle to tyranny, should be viewed by us as a boon, not a danger.

Bartholet says. “I think it’s always dangerous to put powerful people in charge of the powerless, and to give the powerful ones total authority.” Indeed!  Who are “the powerful ones” trying to get “total authority” over us all, including our children? As I intimated, only proponents of tyranny are genuinely threatened by the fact that parents still have the right in our current governmental system to educate their children.

“European countries such as Germany ban homeschooling entirely…” Is she implying that this vestige of Hitler’s Nazi regime is a good thing that we should want to implement?  Similarly, Hungary is still under some remnants of their more-recent Communist-regime, with regard to homeschooling parents being forced by law to teach their State curriculum. These are examples of real extant violations of parental rights in a democracy, yet those scary parents of the 3-4% of homeschooled children in America are made out to be the bogeyman. 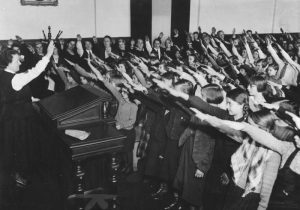 b). Here are two more quotes:

“She concedes that in some situations, homeschooling may be justified and effective. ‘No doubt there are some parents who are motivated and capable of giving an education that’s of a higher quality and as broad in scope as what’s happening in the public school,’ she says. But Bartholet believes that if parents want permission to opt out of schools, the burden of proving that their case is justified should fall on parents.”

“Even apparent requirements such as submitting curricula, or providing evidence that teaching and learning are taking place, she says, aren’t necessarily enforced.”

Let’s play a game: Public schools and homeschooling parents must prove that all their students are in an environment safe from perverse influences and bullying, and are also receiving a high-quality education, wherein evidence of both teaching and learning taking place, are included.  Public schools, you go first…

If the director of the Law School’s Child Advocacy Program lived up to her title, she would be advocating against the legal right parents have to murder their children (in the womb) and not against their legal right to educate their children. That elephant in the room makes me feel like I’m in the Twilight Zone, viz. It’s totally fine for parents to have absolute power to choose life or death for their children, but don’t you parents even dare consider teaching the ones allowed to be born!

The entire article is so fraught with fallacious arguments that if the idea underlying it weren’t so insidious, it would be nothing more than ludicrous. In view of the current situation due to Covert-19, it may be useful to become aware of some of the multiple agendas surrounding us. If we hadn’t recently experienced many of our “civil rights” being suddenly stripped from us, such outrageous articles published by the likes of Harvard Magazine wouldn’t be of much concern. If you aren’t a homeschooling parent, please don’t think that having the right to homeschool our children being taken away won’t affect you in some way – once the principle is established of the State possessing total control over the activities of parents and their children, it’s only a matter of time before private schools lose their rights…and much more is at stake. This is just one prism of the New World Order with its One World Government that is crystallising around us right now. Who knows if the process will be completed, and if so, how long it will take?

For now, despite the Anti-Social Distancing mandates we’ve been subjected to, by which our governments have already violated the inner sanctum of the family unit forcing asunder families that are spread over more than one household, trespassed on the Sanctuary of the Lord and His rights to be worshipped as He has commanded by His faithful on His holy days, and the abolition of other basic rights of a free society, we still have the means to communicate electronically (which can be, and are, monitored), so perhaps we should use these means to wave the red flag and blow the whistle on these manifestations of evil, when we see them. Lucifer and his human agents unceasingly disseminate wickedness, lies and other works of darkness. Let us live up to our high calling of Children of God, and constantly be instruments of Goodness, Truth and the Light.

Our personal spheres of influence aren’t big – they seem especially diminutive in comparison with the great and powerful forces we are up against – but there are some deep, dark, dirty secrets these forces keep closely guarded which they wouldn’t want brought out of the shadows:

1) There are a lot more of us than there are of them. They are exceedingly outnumbered by the masses of mankind whom they are trying to dominate, so they constantly wield the sword of fear over us to hide that fact.

2) Ultimately, it is the ever-raging spiritual battle that really matters. Prayer and penance are our main weapons; “Watch and pray.” In the final analysis: “Our help is in the Name of the Lord.” To echo Low Sunday’s Gospel message, twice told us by the Word and Risen Lamb of God: “Peace be to you.” That being the peace of Christ, which the world cannot give…nor anyone can take away from us unless we let them.