An Ordination in France 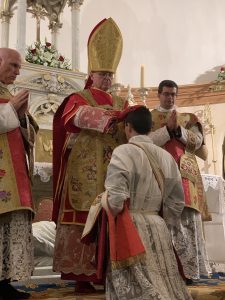 It has only been ten days since Fr. Henry Chappot de la Chanonie was made a priest of Jesus Christ by H.E. Bishop Donald Sanborn.  In times past, an ordination of a priest in France, the eldest daughter of the Church, was hardly news.  France was so full of priests that it had an entire seminary and apostolate based in Paris, the Missions Etrangers, that exclusively trained clergy to go to foreign missions, never to return home.  But in our days, there have not even been half a dozen ordinations of priests for the Catholic Church in this blessed country since the 1968 new (and invalid) rite of episcopal consecration further demarcated the Novus Ordo sect from the Catholic Church after the robber council that was Vatican II.

I say ordained "for the Catholic Church" because certainly the Society of St Pius X (or, "La Frat" as it is known colloquially here) has ordained some valid priests in France for decades.  But they have not ordained them for the Catholic Church, but rather for themselves and their own strange "recognize and resist" group and universe in which they, not the man whom they consider the Vicar of Jesus Christ on earth, are the final word on Catholicism.  They, their made-up magisterium, their una cum Masses, and their priests cannot be considered a real option for any serious Catholic.

While I have been very fortunate to have witnessed several traditional ordinations to the priesthood, most recently in Verrua Savoia in 2018, this was the first time that I had been the witness to the beginning and ending of a journey of a cleric.  In 2016 I had witnessed Fr. de la Chanonie's reception of the tonsure and formal entrance to the clerical state in his paternal grandparents' family chapel, which was at the tail end of a multi-country visit by Bishop Sanborn.  It was a special day, being the feast of St. Anne, patronness of Brittany.  The day of his ordination was similarly special, as September 2nd commemorated the 191 martyrs who were murdered by a bloodthirsty mob in Paris in 1792.  And yet, this priest of Jesus Christ, the first ordained in France for the Catholic Church since 2010, would not face bloodthirsty mobs with a hatred of religion.  Instead, as he raised his hands in elevating the host for the first time the following day, September 3rd, the feast of St. Pius X, of immortal memory, he would face something much worse than hatred: the indifference of modern man.

In that context, the devil certainly hadn't been indifferent to the progress of this young cleric and did his best to impede it.  Fr. de la Chanonie left his native country and came to the United States to attend Most Holy Trinity Seminary and some years into his theologate ago took so ill that he had to return to France to convalesce.  His ability to continue his seminary training was in real doubt.  But after many months of healing and some fundamental changes to his diet, he returned to the seminary in Florida, and later, as he came to France in the final months before his ordination, he used videoconferencing technology to join the classmates he could not see in person.  Even in the final weeks before ordination, the diktats of the current health dictatorship in France threatened the ordination, as a "health passport" forbade those without vaccinations or 72-hour PCR tests from boarding trains or eating at restaurants.  Bishop Sanborn weighed the possibility that restrictions could get even worse by the time that he actually arrived and yet still decided to come.

In the beauty of the ceremonies and the joyousness of the celebrations that come afterwards we often miss the chance to recognize those unsung heroes who help make everything happen.  In the first place, of course, we must thank Fr. Philippe Guepin.  Fr. Guepin entered Econe on the same day that Bp. Sanborn did in 1971.  Who could have guessed so many years later one would host the other for an ordination?  Fr. Guepin has been in Nantes for over four decades now and has acquired many stunning and beautiful objects of veneration for his chapels, both the chapel of Christ the King, in Nantes, and Notre Dame des Dons, in Treillieres, a chapel that dates back to the 11th century and was the place where Anne of Bretagne was married.  All of Fr. Guepin's faithful who assisted with flowers and setup, as well as the well-prepared schola, should also be remembered.  Fr. de la Chanonie will be working with Fr. Guepin for the foreseeable future.

Bishop Sanborn must also be thanked, for traveling during a time in which international travel is unpleasant in the extreme, and indignities like a PCR test are required both coming and going.  His seminarians who accompanied him should also be thanked: an MC, a sacristan, and a valet.  All had their roles to play in what turned out to be a very busy week, featuring confirmations, paten and chalice consecrations, ordination, and the first Mass.  All of those ceremonies required expert layout of liturgical items (sacristan), hours of practice with the servers and clergy (MC), and consistent attention for the different ongoing tasks for Bishop Sanborn (valet), who constantly had laypeople, some who had not seen a bishop in over a decade, wishing to speak to him.

Particular liturgical thanks should go to Frs. Jocelyn Le Gal and Charbel Madi, both of the IMBC, who served as the deacons and subdeacons of the Mass, respectively.  It was their familiarity with pontifical ceremonies and their economy of movements in a small sanctuary that smoothed the way for Fr. Guepin, acting as assistant priest during the ordination ceremony.  Fr. Guepin had not had a role to play in a pontifical ceremony for many years and while he faced a language barrier with the English-speaking MC, he was aided by the French-speaking Fathers of the IMBC at certain moments of the ceremony when the MC may have been in another part of the sanctuary.  Having watched the preparation for these ceremonies in the days leading up to September 2nd, watching it come off was astonishing: clergy from different parts of the world, not always speaking the same language, having never done a pontifical ceremony in that sanctuary and some never in any ceremony together, coming together to create something harmonious and beautiful.

We were fortunate enough to be able to offer a livestream of both the ordination and first Mass so that you can see that harmony yourself.  The faithful in America, so often spoiled for choice for both streaming and live Masses, were the ones who had to wake up at 4am in order to watch the 10am ceremonies, while the Aussies comfortably enjoyed a convenient (for once) 4pm time.  Knowing that people from at least seven different countries were watching the ceremonies with us once again drove home the universality of the Church.

That same universality really hit home for me at Confirmations the previous Sunday.  At the close of the ceremony, the confirmanti are to recite the Creed, the Our Father, and the Hail Mary in front of the Bishop to demonstrate, pro forma, their knowledge of these prayers.  The congregation didn't pick up on this distinction and so the entire chapel resounded with the French version of these fundamental prayers of our religion.  While I've learned these prayers in my years here in France, I knew that the American seminarians might be hearing them for the first time and I was reminded again of the beauty of our faith: when traveling we may not be able to communicate with the persons to our right or left in a pew, but we are united in the only thing that matters in this short life: faith in Our Lord Jesus Christ and the Church He founded to aid us to salvation.

As the Bishop prepared to head back to Paris and a flight back to the seminary, Fr. de la Chanonie's parents chatted with him after an early Mass he celebrated at Notre Dame des Dons.  "We gave you a man, and you gave us a priest," his mother said, holding back tears.  Indeed, what a wonderful gift of a family to the Church: hands to offer the Eternal Sacrifice to our Heavenly Father each and every day he is granted the opportunity to do so.