By the time I landed in Florida, after our Cinci holiday, I was feeling kind of vague with an inability to concentrate with the usual facility, presumably due to such a long lack of a decent night’s sleep. And I also didn’t fit into my clothing properly due to sudden weight-gain, presumably due to having been wined and dined to a superlative degree for far too long. Consequently, I didn’t feel like my usual self but that didn’t stop the TR show from going on and I had no choice but to keep up with it, so the newfound caffeine-dependency continued, as did the “junkfoodfest,” taking place now in Brooksville, Florida.

It so happened that Father Cekada took the same flight as us to Tampa, so after viewing a fascinating landscape whilst flying over the irregular coastlines before landing at Tampa airport, we crossed paths again with Father on the shuttle to the luggage carousel and then briefly were introduced to Father Despósito, before he drove Father Cekada to the seminary.  The next time we came across these priests was when we assisted at Mass the following morning at MHTS with the surprise bonus of actually being at four Masses being offered almost simultaneously on the various altars in the seminary church!  I couldn’t help but be awed at the thought that I was witnessing what I believed to be verily the most important work under the sun in a single locality at this point in time – there stood four true priests of God quietly and unassumingly going about their duty of offering the Holy Sacrifice; one can only try to imagine the unspeakable graces and blessings being drawn down on this needy and oblivious world as the Divine Son is being offered to the Eternal Father as Heaven and Earth meet on those four altars.

Observing the rows of seminarians, solemnly and diligently fulfilling their roles, furthered my conviction of the ultimate importance of the work taking place on that hallowed ground. Anyone saddened by the iniquity and darkness prevailing over almost the entire world at this time, when Holy Mother Church, especially represented in her chosen servants (the “lot” who is the Lord Himself), has been reduced to poverty and subjection by her enemies, will be greatly heartened and filled with increased hope upon witnessing the grassroots rebuilding occurring there – and will, no doubt, be inspired to pray more for their continued success. 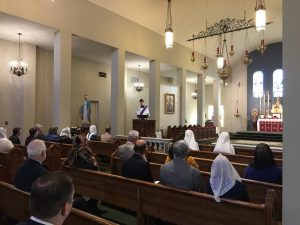 Assisting at High Masses for the feast of the Immaculate Conception and the following Sunday, complete with the impressive processions of torch bearers and many seminarians as altar servers, succeeded by all the magnificently-vested priests, effected a profound lesson on the gravitas and sublime importance of this Supreme Sacrifice being re-enacted daily on these Sacred Altars. Magnifying this effect, the spacious, exceedingly-beautiful sanctuary is flanked on the front ceiling with seven superb sanctuary-lamps hanging majestically in the foreground over single rows of ornately-carved chairs (choir stalls) on both sides leading the eye to the elaborately-bedecked Central Altar area boasting a backdrop which raises one’s gaze heavenward via three stained-glass arched-windows. The harmonious use of gorgeous stained-glass windows, contrasting the plain white walls in the very aesthetically-pleasing edifice housing this impressive seminary, evokes thoughts of how the Light of Christ is required to illuminate and enlighten our minds, as we see the sun (like the Sun of Justice), shine through the glass thus revealing the previously dark and unclear images. Standing without, it also reminds us how in this earthly life “we see through a glass in a dark manner” but through the merits of Our Saviour – the Light of the World – we can in the next life see “then face to face.”

After multiple trips, over the course of just over a week, from our hotel to the seminary for Masses, Confession, Vespers and Compline, I was thoroughly convinced that if my immediate family were able to reside in USA (which we are not) I would surely want to live within five minutes of the seminary so our family could attend to our essential duties and realistically be able to also fit in frequent visits to MHTS to benefit from the riches of these liturgical services on a daily basis. It was Compline there with the Canticle of Simeon (Nunc Dimittis), with sentiments that seemed most apropos of the setting, that finally and totally convinced me of this.  What a perfect way to end each day!

(And yes, that chapel has comfortable padded kneelers on the pews, too. Our Aussie church pews, like us Aussie-sedes, are rustic in comparison with our plain, hard, wooden kneelers.) 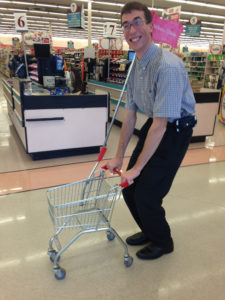 As for a review of the TR Annual Meeting and Member Meet Up: given my daughter has been asked to write a blog for those aspects – specifically, and I was tasked to blog only about our Cinci and Florida visits – generally, I will not go into too much detail of these events.  Suffice to say that I considered the Annual Meeting to be successful. I enjoyed catching up with my TR friends: Matt Gaskin, Jason Guardiano and, of course, Mr. Boss Guy Stephen Heiner - and it was an added bonus to welcome and interact considerably with Justin Eldracher, as a new member of staff who happens to be a younger brother of our resident priest here in Australia. Despite seeing my offspring Matthew and Genevieve, regularly, it was also great to have them present for these meetings.

The main bonus of attending the TR Annual Meeting was undoubtedly the unexpected privilege of the TR staff dining at an Italian restaurant with Bishop Sanborn, Father Cekada and Father Selway. I cannot clearly recall the conversations of that evening because I was somewhat distracted with being overawed by the incongruity of a nobody housewife as myself actually being there at the same table with the leading Catholic clerics, the highest dignitaries of our day! It is still mind boggling and the only way I can reconcile this bizarre and surreal occurrence, is in consideration of when I was asked by Stephen Heiner if I would host the Catholic Home Show series for TR. My natural inclination screamed, “no way”, but my husband said I should do it because it was a means whereby we could indirectly support the work of the clerics involved. Agreeing to do so then led into being asked to perform extra duties and further behind-the-scenes involvement, with which I happily complied, expecting nothing in return (in this life) given I considered any work for TR to broadly be “for the greater glory of God and the salvation of souls” and particularly as a means to bear witness to the importance of being instructed and led by sound members of the clergy as well as to give testimony to the necessity of subjection to the hierarchical structure and order ordained by God. Furthermore, Matthew has been assisting TR to much more of an extent and for longer. Therefore, I accepted that restaurant outing as some sort of generous “gift” from above in return for those services rendered, and am extremely grateful. My only regret is that we have no photos from that night to show my husband and non-present children as evidence, nor for our family records for posterity’s sake, proving our claim to fame.

Following close on the heels of this dinner, the Member Meetup brought an additional surprise dinner with Father Cekada for the TR Members. That evening it struck me that it must feel strange for our remnant clergy to be such “superstars” in the eyes of the bulk of the (true) Church Militant but Father took it all in stride and slid with ease into the celebrity role – as expectations demanded (noblesse oblige) – having all his audience intently absorbed and hanging off his every word. We TR staff were at a different table to Father, hence out of earshot but we enjoyed observing our members so thoroughly thrilled and enthralled by Father’s company.

In between all the educational talks provided by Bishop Sanborn, Father Fliess, Father Despósito and some TR staff, it was also marvellous to be able to socialise with the TR members who attended the conference. It was super to finally meet the young man who has been helping me, across the miles, with the production of transcripts. His fervour and dedication are very apparent and he is a credit to his parents whom I planned to meet but missed out on due to unforeseen circumstances. Although we are winding down the transcript production, he has new duties in other areas such as audio production, so we can expect a continuance of working together and future opportunities to catch up in person. Similarly, it was great to meet a couple from Colorado with whom I had been communicating over email, whose expressions of appreciation for the public work we do have been very encouraging. I am thankful for their morale boosting and the help given in library-material copy-missions in Denver which couldn’t have been achieved without them. It was likewise fabulous interacting to such an extent with all the like-minded Catholics who attended this function. I am grateful to have had the opportunity of getting to know some of the formerly “invisible listeners out there somewhere” and to hear firsthand confirmation that our efforts are of lasting value to many souls.

This account would not be complete without mentioning the fortuitous meeting of three Floridian families who all made a deep impression on me, not least due to their gracious and sincere welcoming of veritable strangers (being myself and my two eldest children) into their homes and inner sanctis but mostly because of how manifestly and genuinely they are all leading such exemplary and solidly-tremendous Catholic lifestyles.  Their kindness, integrity and complete absence of pretentiousness made us feel immediately at home and instantly simpatico – not to mention they were simply great fun. It was so heartening and edifying benefitting from the serendipitous discovery of such families, living so far away geographically but so close in spirit; I view them as fresh examples (in addition to my similar Oz friends) for emulation in our current circumstances.

Getting back to the real world, as the saying goes, upon arriving home I decided that for some Advent penance I would go cold turkey on the caffeine and sugar. Having heard some frightening horror stories of horrendous withdrawal symptoms from caffeine, and not quite as severe, yet still very bad ones from sugar – and in consideration of having escalated from my usual one or two “real” coffees per fortnight to about four or five every day, and from sugar consumption usually only on Sundays to almost every day and in copious amounts, which began about five weeks prior (such drastic deviations having started two weeks before our USA holiday when my Cinci brother, his wife and son, were holidaying at our home), I was bracing for the worst! However, astoundingly, I was entirely spared of any unpleasant symptoms whatsoever; and either broke the addictions easily, or remarkably did not acquire any addiction in the first place. The result was a dearth of Advent penance…and the novel temptation to flirt more with travel, caffeine and sugar in the future.