It finally dawned. The great day for which we had all been planning, and anxiously awaiting for so many months: the arrival of Bishop Sanborn! There were no Handel-style trumpet voluntaries; instead there was an unexpected morning rush because His Lordship managed to catch a much earlier plane from Sydney, which landed him in Melbourne many hours before we expected. Indeed, that was a wake-up call which triggered instant action in our household, having us all springing out of bed.

In case our American readers are wondering: we Australians, like our Irish and English forefathers, address a bishop as “Your Lordship” instead of “Your Excellency.” And truly, we were very cognisant of the fact that we were in the presence of nobility, given a true Catholic bishop is the highest dignitary on earth at present. The honour and privilege of having this much-esteemed bishop on our Australian soil, and gracing our homes and families with his presence, was keenly felt by all. There was an initial hushed and awed nervousness by many - and even the most rambunctious of our group were noticeably subdued during his entire visit.

Our household was particularly blessed and busy, given my husband, Damian, was the organiser of Bishop Sanborn’s trip to Australia. He had scheduled Masses for seven days in a row, Confirmations on the Sunday, followed by days of recollection for both men and women...all taking place in our home! We also had three houseguests staying here for three weeks, including the week the Bishop was here, and a couple of additional overnight-guests here and there, who had a long way to travel to get to these events. Hence, all in all it was buzzing with excitement and much spiritually-enriching activity.

New Year’s Eve was rather restrained here, compared to the likes of say, Times Square’s celebrations, with convivial conversation and drinks around the table during a brass-polishing-fest. All the best brass came out boldly for the event: the special candlesticks, vases, and sacred vessels in preparation for the big day of the Feast of the Circumcision of Our Lord. Our overseas guests, Jason Guardiano and Matthew Gaskin, hosts on Restoration Radio, were also put to work with this, and other things, in order to aid the smooth running of events.

2017, commonly spoken of in Catholic circles as a portentous year, opened true to that form. The bishop’s Mass and the Confirmation ceremony were attended to by four servers and an additional director; quite an impressive sight with the extra pomp and circumstance to what we usually experience here in our mission. It was somewhat surreal hearing a sermon by Bishop Sanborn for the very first time - live - rather than the countless times we have heard them as recordings over the years. Like all his sermons, it was excellent, and loaded with wonderful counsel for a new year of growth in holiness.

Although, none of my immediate family were confirmed that day - thus we were deprived of that extra honour - I confess to struggling to fight back the tears when I witnessed the first boy in our group getting confirmed whilst his two older brothers knelt with such admirable gravitas, serving His Lordship during this sacred ceremony. I thought not only of the great grace we were being given as a group, but how very blessed that particular family were - and especially thought of their mother - and the overwhelming joy she must have been experiencing at that moment. Hence the tears of empathy, only a mother can truly understand. 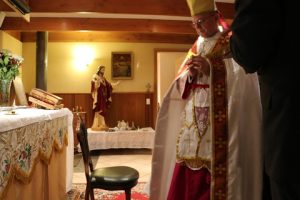 Instead of the usual “meet, greet, and eat” with the Bishop and the Mass group, being at our house after Mass, this day we had a picnic at a local park. Being summer here on January 1st has its advantages. His Lordship was still jet-lagged, yet I think he enjoyed the different cultural experience, including a drop of some of our world-class Australian red-wine, our strange accents despite our shared English language, and some Aussie food, whilst watching the children play cricket. Oddly enough, there were what seemed like a number of Mohammedans at the park that day, so it was quite an ecumenical experience what with the Catholic children vs the Islamic children. You will be pleased to know that the Catholic young cricketers creamed (i.e. defeated overwhelmingly) the infidel opposition.

Monday, January 2nd, marked a highlight of the visit, being the Seminar Day. His Lordship delivered two powerful public lectures in a function room at the hotel where he was accommodated. Almost the entirety of our local Mass group attended the seminar; additional people, some known to us and others not known to us, were also in attendance. Being a national public holiday made that date an ideal one for this event, given most people in Australia didn’t have to go to work that day. Bishop Sanborn was a notable exception. He stood for hours presenting crucial information, ranging from the history of the perverse philosophies underlying the Modernist, Vatican II sect, right through to the devastating consequences of that Vatican II Robber Council. The first talk was titled: “Catholic Doctrine - Why no one has a right to an opinion” and the second was “Vatican II - The cause and effects.” The question and answer sessions following each talk were covered by Bishop Sanborn in the same fashion as his talks, viz. in his inimitably clear and direct style, demonstrating his astonishing erudition; the vast and profound knowledge attesting his superior scholarship was undeniably manifest. The manner by which some of his wealth of understanding was conveyed to us avid learners that day, was in accordance with his calling as a master teacher. He is truly a godsend to the persecuted Church and the antichrist-world during these dark times. (The videos of these talks will later become available on True Restoration.)

Sixteen Catholic men, thirteen from our local Mass group, Matthew from England, Jason from America and another young man who travelled here from New Zealand for the bishop’s visit, were all in attendance at the Men’s Day of Recollection. I don’t know what happened in there but I heard occasional bouts of laughter coming from that room, along the way, and there was much bonhomie among the gents over their meal afterwards.

Fifteen Catholic ladies attended the Women’s Day of Recollection the following day. Topics covered ranged from those pertinent to married women as well as those relevant to single women, given we had a number of both married women, who are also mothers, and single young ladies present. Upon completion, some of the women lined up with their questions for His Lordship, whilst lunch was finished being prepared, ready to be served in another room. It must have been penance for His Lordship having to sit through our post-recollection luncheon - and I am not referring to the humid and hot weather. After being surrounded for long enough by us clucking hens, he seemed keen to head outside to chat with the male members of my family, and our male houseguests, who were banished outside for the duration of our Ladies’ Day.

The week went all too fast, and with our morale invigorated, yet being physically exhausted, we were sad to say goodbye to the good bishop as he headed off to Brisbane for Round II of the historic event dubbed: "A.D. 2017 - Australia Meets Bishop Sanborn."