Baptism of Desire and of Blood

Despite booklets, sermons and articles by Catholic clergy categorically refuting the claims of what has come to be known as  "Feeneyites" or "Feeneyism" denying either, or both, Baptism of Blood and Baptism of Desire, it is bewildering that those who claim to be "Traditional Catholic" still pay any attention to these ludicrous and erroneous propositions.

Further to the article: "Baptism of Desire and Theological Principles" published in the year 2000 by Fr. Anthony Cekada, and this exchange with Fr. Cekada, "Baptism of Desire: An Exchange" as well as his, "Was Fr. Feeney's Excommunication Doubtful," we found this recent sermon by Fr. Philip Eldracher, of Mary Help of Christians Chapel, in Australia, to be so clear, precise and of such great value insofar as putting an end to these outrageous beliefs, that we have produced a transcript for publication here (with permission):

Sermon on the Catholic Teaching on Baptism of Desire and of Blood given by Fr. Philip Eldracher of Mary Help of Christians Chapel in Australia, given on Sunday, 23rd January, 2022 (Commemoration of St. Emerentiana) 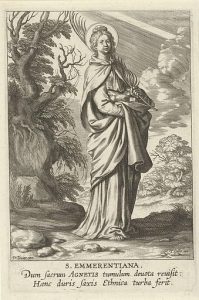 “Amen I say to you, I have not found so great faith in Israel.”

In today’s Gospel, the pagan centurion, moved by the light of Faith, approaches Our Blessed Lord to request a cure for his servant, insisting that Our Lord might even heal his servant from a distance.  Our Lord commends the great Faith of the centurion, and this is the first thing of which I will speak today.

The virtue of Faith, which is infused by God into the soul, can be defined as the assent of the intellect to those truths revealed by God – whether contained in Sacred Scripture or Tradition – which the Catholic Church proposes to us for our belief.  The acceptance of these revealed truths is founded upon the authority of God Who reveals them, for He, as the Author of all Truth, can neither deceive nor be deceived.  To give the assent of the intellect, or mind, is to believe without hesitation or doubt; and we can, and must, do so regarding those things proposed to us by the Catholic Church for our belief, for God Himself has borne witness to the truth of the Catholic Faith by countless miracles throughout the ages, and has Himself solemnly promised that He will be with His Church all days, even to the consummation of the world, and the gates of Hell shall not prevail against Her.

How then, does the Church propose to us those truths to which we must give the assent of faith and the submission of our intellect?

Firstly, by her solemn magisterium.  By this we are to understand the teaching of the Roman Pontiffs when they speak ex cathedra, that is, invoking the assistance of the Holy Ghost and their apostolic authority, with the intention of binding the faithful in matters of faith and morals.  An example of this is the definition of the dogma of the Immaculate Conception.  The solemn magisterium of the Church also includes the pronouncements of the ecumenical councils, such as, for example, the decree of the Council of Trent on justification, and the “anathema” which it pronounces against the errors of Martin Luther.

In the Fourth Place, the Church proposes truths to us by means of the common teaching of theologians.  This, in a certain sense, falls under the universal ordinary magisterium of the Church, and Pope Pius IX, in his encyclical Tuas Libenter, says that this extends even to those doctrines which are held by theologians as being a theological truth or a theological conclusion, or even merely so certain that the opposite opinion merits some degree of theological censure, such as “rash,” or “offensive to pious ears.”

These things, the Church teaches us, we are bound to accept by the virtue of Faith, for to deny or to doubt any of these things is to ultimately deny the veracity of God Himself.  The Church also teaches that we are bound to reject things contrary to the Faith.

Pope Pius XII has condemned the notion that Catholics are not obliged to give assent to what is taught in Papal Encyclicals if the pope is not speaking ex cathedra.  He declares that in such instances, the words of Christ, “He who heareth you, heareth Me,” are applicable.

With the “Syllabus of Errors,” Pope Pius IX has condemned the notion that Catholics are only obliged to believe those things which are solemnly and infallibly defined as dogmas of faith.

In the papal bull “Auctorem Fidei,” Pope Pius VI has condemned as heretical the notion that theologians have “obscured” the more important teachings pertaining to religion and salvation.

The second subject I will speak of today is the application of these principles of the Catholic Faith to a particular subject called to mind both by the pagan centurion’s great act of faith in today’s Gospel, and by the martyrdom of St. Emerentiana, one of the saints we commemorate today: I will speak today of what is the teaching of the Catholic Church – to which each of us must give the assent of faith – regarding baptism of desire and baptism of blood.

In the 1940s, a certain priest in the United States of America, Father Leonard Feeney, proposed a novel understanding of the Catholic Doctrine “Outside the Church there is no salvation.”  As a means, he proposed, of countering the evils of ecumenism, he claimed that those who did not receive the Sacrament of Baptism, that is, the baptism of water, could not in any circumstance be saved, but were necessarily damned, even if their inability to be baptised or ignorance of their obligation to be baptised was through no fault of their own.

In the aftermath of the errors of Vatican II, unfortunately, some among the laity have been convinced into believing that this error of Fr. Feeney’s is the teaching of the Catholic Church.  Nothing could be further from the truth.

Baptism of desire can be defined as the act of perfect charity, or perfect contrition, with at least the implicit desire to receive Sacramental baptism.  It is called “baptism of desire,” not because it requires the same desire for baptism that is present at the baptism of any adult, but because it consists only in this desire, at least implicit, of receiving baptism.  An implicit desire for baptism is, in the case of a person who knows nothing of baptism or its necessity, the desire to do all that God commands under pain of mortal sin, and to use all the means necessary for salvation.

Baptism of blood is martyrdom for the sake of Christ, that is, to tolerate death rather than to deny Christ, the Catholic Faith, or some other Christian virtue.

The teaching of the Church is, and has always been, that baptism of desire – even implicit – and baptism of blood are sufficient for salvation, when baptism of water cannot be had.  Only baptism of water, however, is a sacrament.

Both baptism of desire and baptism of blood are supported by the words of Christ Himself in Sacred Scripture.  As St. Augustine points out: “Whosoever dies to give testimony to Jesus Christ, thereby receives the remission of his sins just as if he had been cleansed in the sacred waters of baptism. For He who said: ‘Unless a man be born again of water and the Holy Ghost, he cannot enter into the kingdom of God,’ makes an exception when He says not less absolutely: ‘Whosoever shall confess Me before men, him shall the Son of man also confess before the angels of God,’ and again: ‘He that shall lose his life for My sake, shall find it.’”

Elsewhere in the Gospel, Our Saviour no less solemnly declares, “He that loveth Me shall be loved by My Father, and I will love him, and will manifest Myself to him.”

The Council of Trent solemnly teaches that the desire for baptism, which it defines as “an act of perfect charity or of perfect contrition,” is sufficient for salvation.

This doctrine is likewise supported by the constant teaching of the popes, including Pope Innocent II, Pope Innocent III, Pope St. Pius V, Pope Pius IX, Pope St. Pius X, Pope Pius XI, and Pope Pius XII.  It has been explicitly taught in all Catholic catechisms for centuries, such as the Catechism of the Council of Trent; the Catechism of St. Pius X; the “Baltimore Catechism” published by the Catholic hierarchy of the United States; Fr. DeHarbe’s “Complete Catechism of the Christian Religion,” and the “Exposition of Christian Doctrine”  by the Brothers of the Christian Schools, which received the personal approbation of Pope Leo XIII.  This doctrine is likewise explicitly taught by the Code of Canon Law ordered to be compiled by St. Pius X, and which was promulgated by Benedict XV.

This doctrine is held as certain by all theologians, and was taught in all manuals of sacred theology used in seminaries for the training of priests.

Lastly, the error that baptism of desire or baptism of blood are not sufficient for salvation was expressly condemned by the Holy Office during the reign of Pope Pius XII.  The explanation of the condemnation, which received the personal approval of the Holy Father Himself, concludes: “Therefore, let them who in grave peril are ranged against the Church seriously bear in mind that after “Rome has spoken” they cannot be excused even by reasons of good faith. Certainly, their bond and duty of obedience toward the Church is much graver than that of those who as yet are related to the Church “only by an unconscious desire.” Let them realize that they are children of the Church, lovingly nourished by her with the milk of doctrine and the sacraments, and hence, having heard the clear voice of their Mother, they cannot be excused from culpable ignorance, and therefore to them applies without any restriction that principle: submission to the Catholic Church and to the Sovereign Pontiff is required as necessary for salvation.”

To those who might hitherto have been misled into believing that Catholics ought to reject baptism of desire or baptism of blood, heed now the voice of Holy Mother Church, and give the assent of your intellect to these truths which she proposes to your belief.  Repent of your error, speak with your confessor, and resolve that never again shall you give any credence to anything which questions the magisterium of Holy Mother Church.

To those, however, who might claim that they know better, and that they are free to interpret the teaching of the Church on this subject as they please, I say this: there has always been a notice published in the weekly bulletin stating that those who do not accept baptism of blood or baptism of desire are barred from receiving the Sacraments.  Every person who approaches me for the Sacraments, therefore, is on each occasion publicly professing his acceptance of baptism of blood and baptism of desire as being sufficient for salvation.  To be deceitful regarding the Faith, in the very act of receiving the Holy Eucharist or Sacramental Absolution, is a terrible sacrilege, which can be likened to the betraying kiss of Judas.

Our Blessed Lord declares in the Gospel: "For with what judgment you judge, you shall be judged."  By denying baptism of desire and baptism of blood you deny to others in your own mind the possibility of invincible ignorance, the possibility of being in good faith, the possibility of obtaining perfect contrition, the possibility of receiving the supernatural virtues of Faith, Hope, and Charity, the possibility of salvation.  You have in your mind damned the innocent to hell without cause, and contrary to the teaching of Holy Mother Church. You also will one day be judged, not by men, but by Almighty God, and unless you first repent, St. James tells us what will be your sentence: "Judgment without mercy to him that hath not done mercy."