Behind the Lodge Door – Book Review

“Behind The Lodge Door,” written by Paul A. Fisher, in 1988, is an extensive look into Freemasonry, compiled with many facts and accounts of the secret society that has weaved its way into many aspects of our society, especially in the United States of America.

If you’ve ever felt as if the enemies of the church are in full force, although unseen, this book will reveal one of the most evil and menacing organizations veiled in secrecy, which aims to destroy the Catholic Church.

Why is the world so bent on freedom of thought, ignoring of conscience and morality? Is it their own idea? Or are they being led on and assisted by Freemasons who are boldly rising up against God Himself? 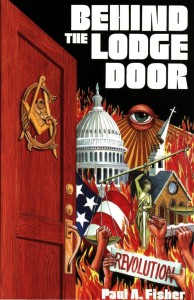 This book provides diverse perspectives, giving multiple views on Freemasonry, including beliefs and perspectives from the minds of Masons, references from the Catholic Church’s various Pontiffs and accounts from other secret societies whose goals and philosophy are co-aligned with that of Freemasonry.

Although this book is very intellectual and at times, difficult to read, the eyeopening knowledge attained is well worth the effort.

Shocking evidence proves that Freemasonry has found its way into public offices, the justice system, politics, and education.

Pope Leo XIII declared that it uses every means of fraud or audacity, to gain entrance into every rank of the State, as to seem to be almost it’s ruling power.

Freemasons have dominated the US. Supreme court for many decades. The high bench has been militant in insisting that the First Amendment mandates a scrupulous separation of Church and State.

Another unremitting activity of the Masons has been shaping the minds of the worlds youth by promoting Masonic values in the schools.

Pope Leo XIII touches on this, “...they think that they can easily mold to their opinions that soft and pliant age, and bend it wither they will… Therefore, in education and instruction of children they allow no share, either of teaching or of discipline, to the ministers of the Church; and in many places they have procured… that nothing which treats of the most important and holy duties of men to God shall be introduced into instruction on morals.”

Graphic examples are given in the book to demonstrate the consequences when people oppose any of these Masonic ideals. There have been cases where they are met with cruelty and violence.

The ultimate aim of Freemasonry is the overthrow of, what they perceive as, spiritual and political “tyranny” and class privileges. Their goal is to establish a universal social republic in which will reign the greatest possible individual liberty, with the fall of all dogmas and churches.

Sometimes men are lured into Masonry by it’s deceptive facade which promises brotherhood and charitable and benevolent endeavors. However, once behind the lodge door they will be bound to the Fraternity by solemn oaths, threats of bodily harm and even death, if they should disclose masonry’s secrets.

Even if people are not inclined to join the fraternity they might be influenced and sympathetic to the Masons’ charitable organizations like the Shriners.

Even the author who had experience with The Shriners parade in Washington, mentions that “we were strongly persuaded to believe that the Catholic Church’s age-old condemnation of Masonic Fraternity must certainly be misguided.”

The stark reality is that all other Masonic activities are “incidental” to the real purpose of Freemasonry, which is the creation and maintenance of a public opinion that will sustain the kind of world that they wish us to live in.

After reading this book one would come to understand the gravity of this wicked organization and avoid fraternizing with this craft, even if it has a facade of charity. With knowledge from this book, we must listen to the declaration of Pope Clement XII...

“We have resolved and decreed to condemn and forbid such [secret] societies, assemblies, reunions, conventions, aggregation or meetings, called either Freemasonic or known under some other denomination. We condemn and forbid them by this, our present constitution, which is to be considered valid forever”

“We commend to the faithful to abstain from intercourse with those societies...in order to avoid excommunication, which will be the penalty imposed upon all those contravening to this, our order, none except at the point of death could be absolved of this sin, except by us or the then existing Roman Pontiff.”

I strongly recommend this book to all!

By becoming aware of what truly takes place “Behind the Lodge Door” we might at least be cautious of their influence and avoid their propaganda and philosophy which has lulled our nation to sleep. 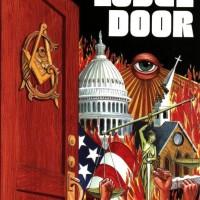 Behind the Lodge Door

Angela is a nanny and self taught hairstylist who has always been a Traditional Catholic, residing in Ontario, Canada. She has a fascination with history and enjoys reading about the Crusades, World War One and other historic type books.