In his April 2016 Seminary Newsletter the Bishop kindly teased me for having a challenging schedule for his Spring visit to the Old World.  I served as his valet for this recent Summer visit and I let him know during this trip and after that he had certainly taken a measure of retribution upon me! 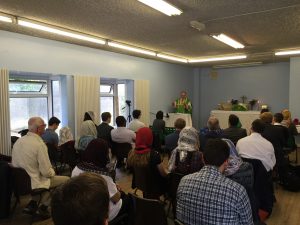 The bishop offers a sermon in London

The reality is that as soon as people know that the Bishop is coming to Europe, all sorts of requests start to be made.  There are clergy who wish to meet him, conferences that are requested, etc.  This is apart from all the ceremonies and events that were already scheduled.  This makes an already decently busy schedule jam-packed, and I can attest to the fact that every day was very much a "bell-to-bell" series of events which started at or before 7am and took us often to 11pm that night.

Our journey began in London, where the Bishop celebrated Mass but also gave the first in a series of conferences on the Eucharist (which will, in the months ahead and in collaboration with the Tridentine Mass Society, be available on TR Media).  The bishop also conferred Confirmation.  He used the visit as an opportunity to cast his vision for the London mission - firstly, an increase in the frequency of Masses, then a permanent residence whereby both England and Ireland could be serviced, and some years beyond that, a proper school, possibly staffed by nuns.  This will all take commitment and clergy and many were heartened to realize that this was not to simply be a "treading water" sustainment project over a number of years, but that the Bishop wants and backs real growth for the faithful there both in the short and medium term. 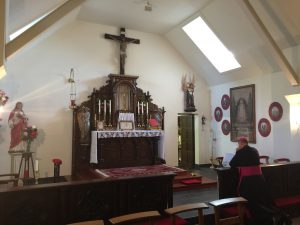 praying before Mass in Belgium

The next day we pressed on to Belgium, just on the other side of the French border.  There we were met by His Excellency Bishop Geert Jan Stuyver, of the IMBC, who kindly allowed Bishop Sanborn to celebrate Mass in the chapel directly adjoining his residence.  There wasn't too much time to spare, as we had to head to Antwerp for an evening conference.  One of the young men provided a simultaneous translation of the Bishop's conference, which was delivered in English, into Flemish, for the few who were not conversant enough to understand the Bishop directly.  The crowd  seemed engaged and I captured part of the Questions and Answers in Periscope which was broadcast live to the world.  You can view that video here. 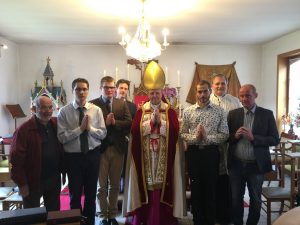 with the newly confirmed in Belgium

The next day it was on to another part of Belgium, Beloeil.  There, the bishop was to confer Confirmations, have dinner with the faithful, and deliver a conference in French.  Belgium is very much a country divided along linguistic lines, with different names for cities (a few of the faithful corrected me when I referred to "Antwerp" which is called "Anvers" in southern Belgium) and a dominant language depending on where you are in the country.  As we were now closer to France (just a few kilometers away,  in fact) French was more spoken.

However, divided as the Belgians might be in language, they were united in their engagement and attention and once again we had a lively and lengthy Questions and Answers portion following the conference.  Just as on the previous day, the Bishop's valet had to cut off the questions at a certain point, if only to safeguard a possible good night's sleep for the continuation of the journey the next day. 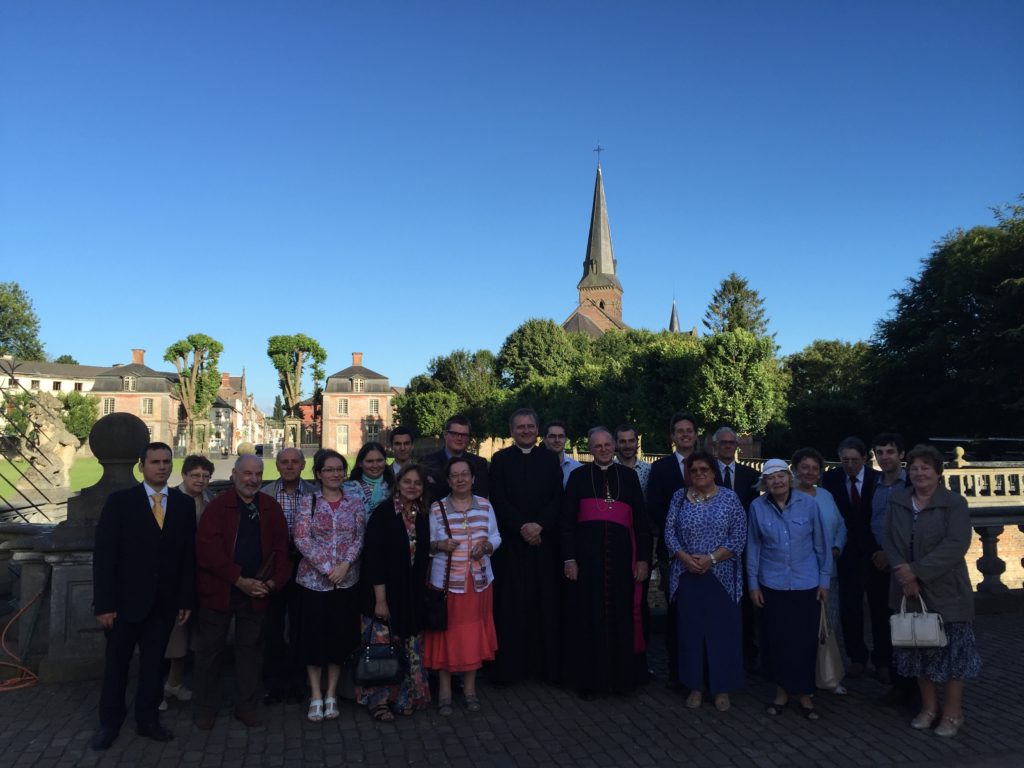 with the faithful in Beloeil

We then prepared for our longest journey of the trip, which was to Loches, where the Bishop would meet with some faithful to discuss some projects and again, give confirmations.  Paris, for better or worse, can really be a whirlpool of traffic, especially during August, and try as we could to avoid it, we were caught in traffic jams both around Paris and on the approach to Orleans.  What would have been a 5 hour trip if all had gone well turned into 8 hours, though we got in at a reasonable hour for dinner and to rest for ceremonies the following day.

We then pressed on to Lamballe, where one of the seminarians would receive tonsure at his family's chapel.  You can see a montage of the Mass celebrated here and some photos of the tonsure and reception of the surplice here.  At Most Holy Trinity the tonsure is received after the completion of the philosophate, and with foreknowledge of the Bishop's pending visit and the conclusion of the academic year, this arrangement was happily concluded.  Henry, our new cleric, did confess that they did not know ahead of time that the Mass of the Sunday would be a regional feast.  St. Anne, patron saint of Brittany, has her feast solemnized on the Sunday following her feast, in Brittany only.  And thus, I experienced for the first (and perhaps only) time in my life, the privilege of assisting at her patronal feast in the old region of France in which she is especially venerated.

We were not finished for the day.  The bishop and I went further south in Brittany to Bain de Bretagne, where he gave two conferences - one on the liceity of consecrating bishops during an interregnum (without apostolic mandate), and the second on the una cum Mass.  The crowd here was the largest, as the French do love controversial topics and it showed particularly in the Question and Answer session, in which more than one member of the audience seemed combative and unreasonable in his questions.  The bishop graciously answered where he could, and I know he was relieved at the final question of the evening.  The long week was complete!

The next morning we left for Paris reasonably early, though no traffic was really to be found.  The bishop, with years of experience on his side, likes to be particularly early for things, like flights, whereas my youthful optimism sometimes cuts it close.  With some gentle reasoning and the promise to abide by a stopwatch, I successfully persuaded him to stop at Chartres on our way back, as the interior of this magnificent cathedral was only recently restored and looks, frankly, brand new.  We were not disappointed, and I kept strictly to our pit stop time and we got back on the road to Paris just 45 minutes after arriving in Chartres.  The bishop made his flight and our journey concluded.

While I was personally grateful for having had the chance to accompany the bishop throughout this arduous journey, those who attended should be grateful as well, for a successor of the Apostles so willing to share his time and knowledge with faithful so far away. 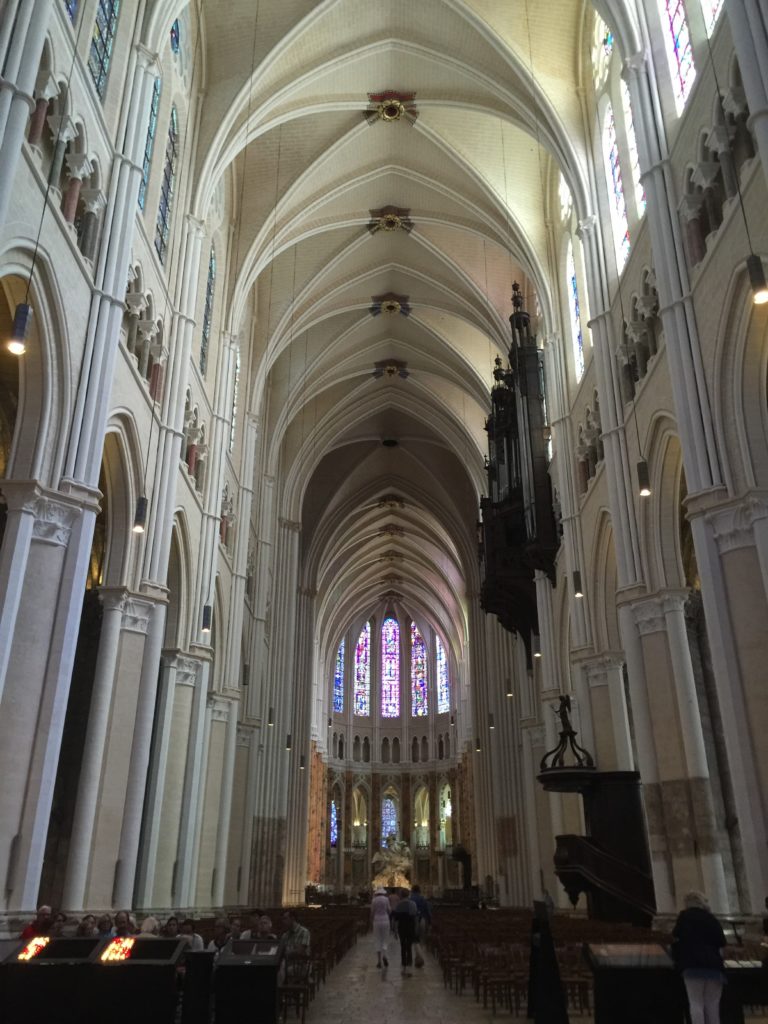 All photos were taken by me and are available for use via Creative Commons/Attribution.