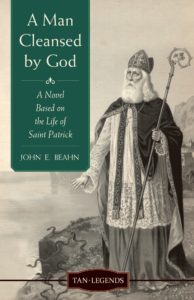 A Man Cleansed by God
A Novel Based on the Life of Saint Patrick
By John E. Beah

When I was asked to read this book to determine if it would be worthwhile for True Restoration to stock in their book store, I was excited initially to find out there was a novel about this amazing saint. Once I read it, I was even more excited to find out how good it is. Though, for many years now, I haven't been able to justify spending time reading general fiction, I do very occasionally make time for fiction that is about a saint or is Catholic in a significant way. For me, the former comprises mostly Louis de Wohl's novels and saints stories aimed at children, such as the Vision Books and Mary Fabyan Windeatt series; and the mainstay of the latter are books by Msgr. Robert Hugh Benson, Fr. Owen Francis Dudley, G. K. Chesterton and Evelyn Waugh. It seems I have a penchant for English, post-Oxford movement Catholic-convert writers; and for stories specifically about saints I seem to favour American authors - and after reading this book, John E Beahn is now definitely among them.

Without going into too much detail, as that would spoil it for you, this book, which is one of four saint's novels by the same author, doesn't simply provide a factual account of the major features of Saint Patrick's life and works, as one would find in Butler's Lives of the Saints and similar strictly biographical works. Rather, it captures the spiritual progression of a not too religious youth, whom God sent various trials and tribulations, in order to transform him into someone possessing heroic sanctity. The difference between him and most people was that he cooperated with God and actually did become that saint that he was supposed to become.

Whilst enjoying this very easy to read story, most of the time being keen to keep reading to find out what happens next, there were quite a few sections that really gave me pause; these seemed like little lessons from the author – and ultimately from God - to instruct and edify the reader in some Catholic perspective or moral, or to encourage perseverance in the pursuit of holiness.

The novel is based on St Patrick's autobiographical work, Confessions. Direct quotes from these recollections by St Patrick are sprinkled throughout, and these are certainly a highlight of this book as they provide intimate insights into understanding this saint and how God worked in, and through, him – and these extracts are inherently very instructive and inspiring.

In view of the dearth of Catholic books for the 15-21 years age-bracket, parents will be especially thrilled to know that this book, unlike Louis de Wohl's novels, is suitable for older children. Although the author touches a couple of times on “adult themes” the references are sufficiently vague to not pose a problem. Having said that, parents would want to read it first to check specific suitability to each of their children - and simply because it's such a great book.

True Restoration Press has obtained a limited number of copies of this book for the benefit of our customers, which may be ordered here just in time for all to receive it before his upcoming feast next month. Every home-schooling family will be jumping on this title, so the rest of you better get in quick.