Book Review: The Idea of a University 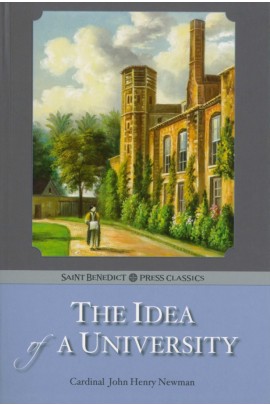 When most people think of Universities they think of them as very expensive hurdles that one must jump in order to obtain a middle-class lifestyle. These days one may look with some cynicism at Universities as ruthless businesses like any other whose raison d'etre seems to be to create the perfect robot for a large, multinational corporation.  Indeed much like everything else, the idea of a University has been corrupted almost beyond recognition.
In his 1858 book The Idea of a University Cardinal John Newman reminds us, with great clarity, of the original idea behind that most Catholic of institutions (in both senses of the word): the University. It may surprise readers to know that the oldest University dates back to 1088 in Bologna, Italy. By the time Cardinal Newman wrote this book the world was immersed in secularism and (especially in his native England) Protestantism. The French Revolution had spread its cancerous fruits and Freemasonic thought had become de jure amongst the once Christian nations. Indeed, one year after Newman had written this book, Charles Darwin had published his influential Origin of Species. Newman's book was thus written as a counter-cultural assertion of Catholic truth in a hostile world. Newman saw the University as a place for the free exchange of ideas but not the unmoored "values-neutral" free-for-all that we have now but one that occurs within the moral authority of Christian revelation. Although Newman's book is called The Idea of a University this is not merely a series of idealistic meanderings but a pragmatic assessment of the intellectual climate of Europe at the time. To use a modern phrase, Newman wanted to make Catholic Universities great again. It was by allowing the freedom to research and publish findings free of censorship that Catholicism could be restored to the place of primacy in European intellectual-life. These Universities although free were also places in which Church teachings were respected and promoted. For Newman "religious truth is not only a portion, but a condition of general knowledge. To blot it out is nothing short … of unravelling the web of university teaching". Knowledge on its own is insufficient to improve the individual. God who sustains all truth is a requirement. Also from Newman "belief in God is no more than an acknowledgement of existing, sensible powers and phenomena, which none but an idiot can deny."
Newman believed in the idea of a University as a place where knowledge could be pursued for its own sake. He saw the pursuit of knowledge as having the tendency to refine the baser passions and civilise the mind. Newman's contention was that vocational courses may be great for the economy but it represented the "degradation of the man as a rational being."  I imagine that had students from 2017 been transplanted into Newman's Greek Mythology class they would probably be saying "great, but how much money will this make me?"  Newman was a believer in the University as a place where education should aim at producing generalists rather than narrow specialists. Indeed, it was thought that by learning subjects that were not immediately job-oriented like arts or pure science one could train the mind in ways that could lend itself to a whole range of jobs. "Jack of All Trades- Master of None" was probably a saying invented by a dour Protestant with no appreciation of the God-given human spirit! In fact, this is where the true meaning of the word liberal in liberal education comes from - the freedom to pursue knowledge for its own sake and grow as a person independent of the restrictive constraints of purely vocational education.

Like most ancient Greek philosophers, Newman saw education as something holistic - that is to say you didn't just "do" school for a few hours then check out. Education was about forming human beings as complete people so that one's pride and passions were tempered by knowledge of Divine truth. Education outside the halls was as important as education within. Newman could not abide the modern idea of divorcing vocational subjects from their broader moral context.

In searching the internet for this book's cultural impact its resurrection comes from a seemingly unlikely source - the political Left; although I have doubts about the purity of their motives! No doubt they are more driven by a desire to criticise neo-liberal economics as well as a  concern that many people are using Universities as a tool to make money rather than engage their suite of Marxist grievances.

I would recommend this book to anyone who has an interest in philosophy especially Catholic philosophy. This book does however carry with it a tinge of sadness. Yes, it highlights the influence of the Catholic Church as representing the very pinnacle of Western Civilisation in its virtue and its intellect but as we walk the earth in 2017 we can also more fully appreciate the fruits of its dark descent into apathy and depravity.