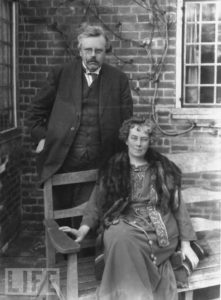 WARNING!  Do NOT read this book, if:

You are not into exercising your brain too much and have no intention of changing that.

You want to lead a simple life and keep your head in the sand with regard to social and political affairs and agendas that have shaped modern times. i.e. “Ignorance is bliss” sums up your ethos.

You do not want to be forcefully confronted with the fact that despite any PhDs you may have to your name, you are grossly ignorant compared to G. K. Chesterton and many other Catholics of his generation.

ATTENTION!  You MUST read this book, if:

You want to know what G. K. Chesterton chose to rant about when he was in a holy rage.

You are interested in reading brilliant, justified attacks against politicians, capitalists, communists, the mainstream Press, modern art and of course the usurers.

You are not averse to using an additional bookmark for repeated visits to the extensive endnotes (159 of them to be exact) because you haven't a clue what Chesterton just referred to; rather you delight in learning footnote-tidbits such as: “Chryselephantine. A term for a style of statue design in which the drapery is made of gold and the flesh of ivory. The technique was used to a limited degree in Egypt, Mesopotamia, and Crete, and extensively in Greece from the 6th century, B.C. Most famous in this style were the images of Athena and Zeus made respectively for the Parthenon and the temple of Zeus at Olympia” because Chesterton happened to write “The chief difference between man and the animals is that all men are artists...There are Chryselephantine statues, but no purely elephantine ones.”

If you find the following selections amusing or enlightening, and are itching for more, this book is for you:

“And avarice has gone mad in the governing class today, just as lust went mad in the circle of Nero. By all the working and orthodox standards of sanity, Capitalism is insane. I should not say to Mr. Rockefeller “I am a rebel.” I should say “I am a respectable man: and you are not.”

“Symbolically speaking, the dirty misers who rule us will put us in a mad house – unless we can put them there.”

“Do you believe in the State? The Samuels also believe, and grin. Do you believe in the centralization of Empire? So did Beit...Do you cry “The world for the workers!” and do you imagine Philip Snowden would not? What we need is a name that shall declare, not that the modern treason and tyranny are bad, but that they are quite literally, intolerable: and that we mean to act accordingly.”

“It is not so much that the party journalists do not tell the truth as that they tell just enough of it to make it clear that they are telling lies.”

“Missing the point is a very fine art; and has been carried to something like perfection by politicians and Pressmen today.”

“There are two letters in the Clarion this week which in various ways interest me very much. One is concerned to defend Darwin against the scientific revolt against him that was led by Samuel Butler, and among other things it calls Bernard Shaw a back number...The other letter consists of the usual wire-drawn argument for fatalism. Man cannot imagine the universe being created and therefore is “compelled by reason” to think the universe without beginning or end, which (I may remark) he cannot imagine either.”

“The point about the Press is that it is not what it is called. It is not the “popular Press.” It is not the Public Press. It is not an organ of public opinion. It is a conspiracy of a very few millionaires, all sufficiently similar in type to agree on the limits of what this great nation (to which we belong) may know about itself and its friends and enemies...The millionaire newspapers are vulgar and silly because the millionaires are vulgar and silly. It is the proprietor, not the editor, not the sub-editor, least of all the reader, who is pleased with this monotonous prairie of printed words.”

Essays included in this book, among many others:

The War on Holidays

The Church of the Servile State

Science and the Eugenists

The Mask of Socialism

The French Revolution and the Irish

The Art of Missing the Point

The Empire of the Ignorant

The Tyranny of Bad Journalism

Utopia of Usurers is not a large book but it will continually make you chuckle, it will repeatedly prompt you to think and question things - and it will make you read it at least twice in succession before you set it aside for future perusal.

Order your copies of Utopia of Usurers and also check out True Restoration's other G. K. Chesterton book titles and Restoration Radio's "The Catholic Home" episodes about this masterly thinker of the 20th century.