Canonizations and the Company One Keeps

Frank Domenico has been following our work for some time and is the newest occasional contributor to True Restoration.

An old saying advises us to believe none of what we hear and only half of what we see. Unfortunately, most Catholics believe all of what they hear and none of what they see. How else does one explain their blind allegiance to the papal claimants soon to be canonized by the Conciliar church?

In the case of Angelo Roncalli, AKA John XXIII, it’s permissible to cut Catholics some slack because the outrageous images of him hobnobbing with the Church’s most dangerous enemies were not readily available. Among these revealing images is Roncalli receiving his cardinal’s hat from France’s Socialist President, Vincent Auriol, an avowed atheist who was rabidly anti-Catholic. Roncalli was also not the least bit shy of being photographed with the likes of Edouard Herriot, a radical Socialist who vehemently denied the Holodomor, the Ukrainian Holocaust that claimed the lives of millions of Catholics via deliberate starvation.

One wonders, however, what Catholics were thinking in the early 1960s when USSR Premier Nikita Khrushchev sent Roncalli a telegram expressing “congratulations and sincere wishes for good health and success in his noble aspirations” on the occasion of his 80th birthday. Roncalli reciprocated several years later when he held a special audience for the daughter of Khrushchev, Rada, and her husband. All of this took place while Catholics behind the Iron Curtain were being tortured and murdered.

And it must have been a terribly confounding experience for devotees of Our Lady of Fatima, whose Third Secret (to be revealed no later than 1960) was buried by Roncalli, who denied Our Lady’s wishes, and therefore, the will of God, by not complying.

Some of the most prominent freemasons of his time have suggested that Roncalli was one of their own. The Grand Master of the Grand Orient of Italy once said, “…it seems that John XXIII was initiated (into a Masonic lodge) in Paris and participated in the work of the Istanbul workshops.” This is the same Freemasonry that was described by Pope Pius IX as the “Synagogue of Satan,” and whose membership incurs for Catholics automatic excommunication from the Church. 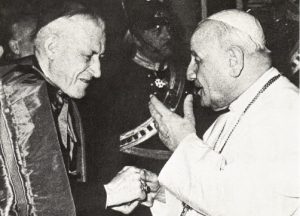 Roncalli’s behavior, as unprecedented as it was, pales in comparison to that of Karol Wojtyla, AKA John Paul II, who used his nearly three-decade long tenure to rub shoulders with the world’s most evil organizations and personages. His actions bespeak one with utter contempt for the millions of Catholics who ignorantly revered him, but in truth, it was this colossal ignorance, not only of Church teachings but also world politics, that allowed them to be duped.

On April 18, 1983, Wojtyla held an audience in the Vatican for dozens of members of the Trilateral Commission, a group working feverishly toward the formation of a World Government that will serve as the precursor of the Antichrist. The following year he held another audience for representatives of B’nai B’rith, an exclusively Jewish branch of Freemasonry whose chief goals are the destruction of the Catholic Church and world domination. In 1936, the London Catholic Gazette published excerpts from a speech delivered at a B’nai B’rith meeting in Paris: "We have blackened the Catholic Church with the most ignominious calumnies, we have stained her history and disgraced even her noblest activities.  We have imputed to her the wrongs of her enemies, and thus brought these latter to stand more closely by our side... We have turned her clergy into objects of hatred and ridicule; we have subjected them to the contempt of the crowd...

"And the Gentiles, in their stupidity, have proved easier dupes than we expected them to be.  One would expect more intelligence and more practical common sense, but they are no better than a herd of sheep. Let them graze in our fields till they become fat enough to be worthy of being immolated to our future King of the World...”
In 1986, at the infamous inter-faith gathering in Assisi, Wojtyla refused to allow a statue of Our Lady of Fatima to enter the basilica, but instead allowed a statue of Buddha to be placed on the alter above the Tabernacle containing the Blessed Sacrament. The union of all religions is one of the principle objectives of Freemasonry, and Wojtyla did his best to speed up the process while Catholics worldwide voiced their unequivocal approval.
That same year Wojtyla attended a celebration commemorating the 40th anniversary of UNESCO (United Nations Educational, Scientific and Cultural Organization), whose self-proclaimed philosophy includes an agenda “to eliminate any beliefs exclusively or primarily based on the hereafter, and must be founded on a global humanism that must be scientific.” 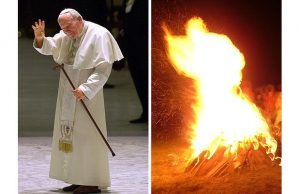 One could go on and on about Wojtyla’s nefarious associations with the world’s most prominent Communists, such as Fidel Castro and Mikhail Gorbachev, or his endless travels designed to level the playing fields between Catholicism and the world’s false religions. What is inexplicable is how his countless acts of heresy and apostasy went unnoticed by Catholics and only served to increase his popularity. Many of the deceived faithful have canonized Wojtyla in their hearts long ago and for most the official ceremony of the Conciliar church is a mere formality. This present state of affairs, with oblivious Catholics prepared to immortalize two of the most successful destroyers of their faith, leaves one with the disconcerting feeling that as bad as things presently are, it’s certain to get a whole lot worse before it gets better.