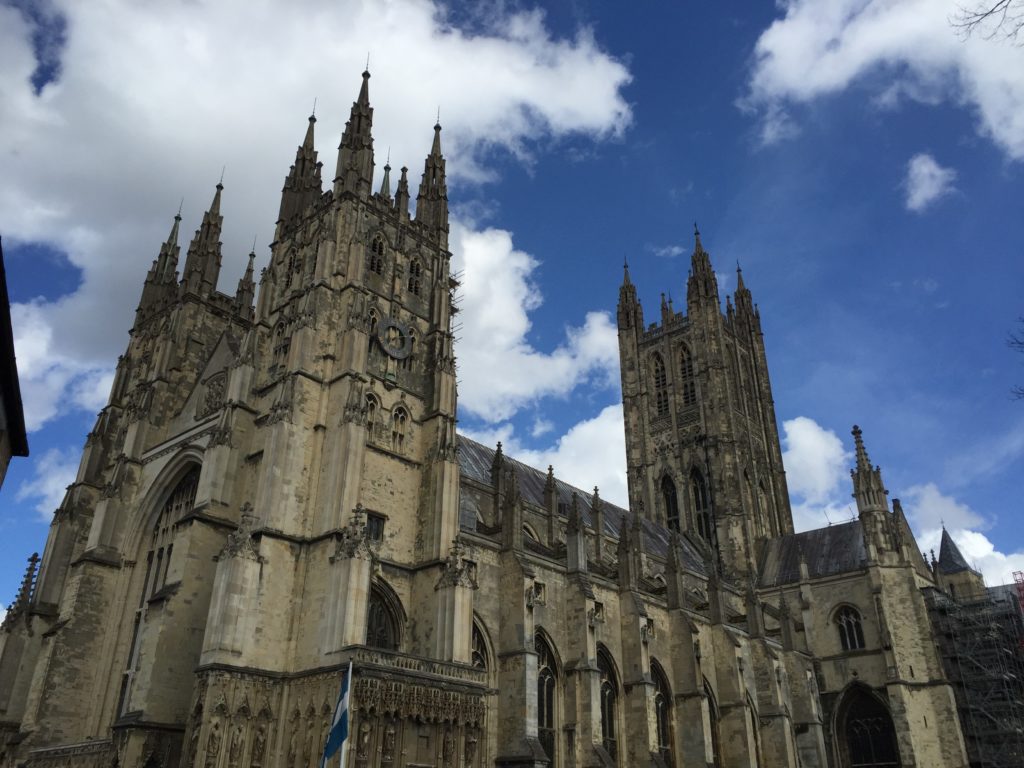 Bishop Sanborn and I looked above the southwest doors to the ancient cathedral.  On the left we saw Sts. Anselm and Augustine of Canterbury.  And to their right?  Thomas Cranmer.  I was astonished, but the Bishop noted, "there is a catechism of Anglicanism in stone...they see these men as belonging to the same church." 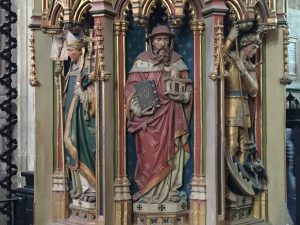 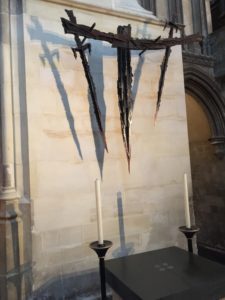 The bishop and I had just spent an hour exploring the cathedral, chock-full of art and statuary celebrating known and notorious "papists."  We saw an ugly modern art piece commemorating the exact place where St. Thomas a Becket was cut down and martyred for Christ.  As for the ancient shrine that had inspired Christians to come and make this a famous place of pilgrimage, all we could see was a small sad sign behind the high altar in the Norman part of the church in which we were informed that Henry VIII had ordered the shrine to St. Thomas destroyed.  I suspect that this was to spare us the more bizarre explanation which was that in 1538 King Henry summoned the dead saint to his court to face charges of treason.  St. Thomas chose not to appear (and given his last encounter, in 1170, with another English king named Henry, one could 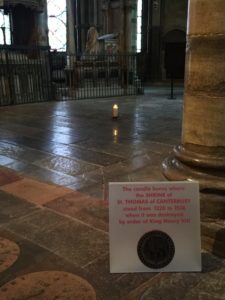 hardly blame him) and so Henry had the shrine dismantled, confiscated, and carted off to his royal treasury, the proceeds of which were used to enrich his friends and make wars on Catholic monarchs.  This sham legal proceeding was simply a fig leaf in prelude to what would happen in March of the following year, when Canterbury finally bowed to the acts collectively now known as the Dissolution of the Monasteries which ran from 1536-1541, in which this notorious and evil king looted and disbanded monasteries, convents, priories, and friaries all throughout this (formerly) blessed plot and envy of less happy lands.

In some ways, ruins would be preferable to confiscated whited sepulchers.  Beloved Tintern Abbey in Wales has provided contemplation and reflection for many throughout centuries: ruins of what was at least preserves in situ that great civilization that was Christendom in England, without the bitter pill of witnessing ongoing theft of patrimony.  What we have so often, in England and Wales, are churches rotted from within - not just by the diluted faith of the attendees (I would not fain call them "believers") but by the odd shrines and memorabilia put up in them by the nobility of the land, which had now firmly put religion "in its place," subservient to the crown with a clear raison d'être: to bless, not restrain and ennoble, the mores of the governing classes.  Those mores, of course, would "advance" with the times, and before long it would be the nobility teaching the Anglican church what was acceptable in the moral sphere. 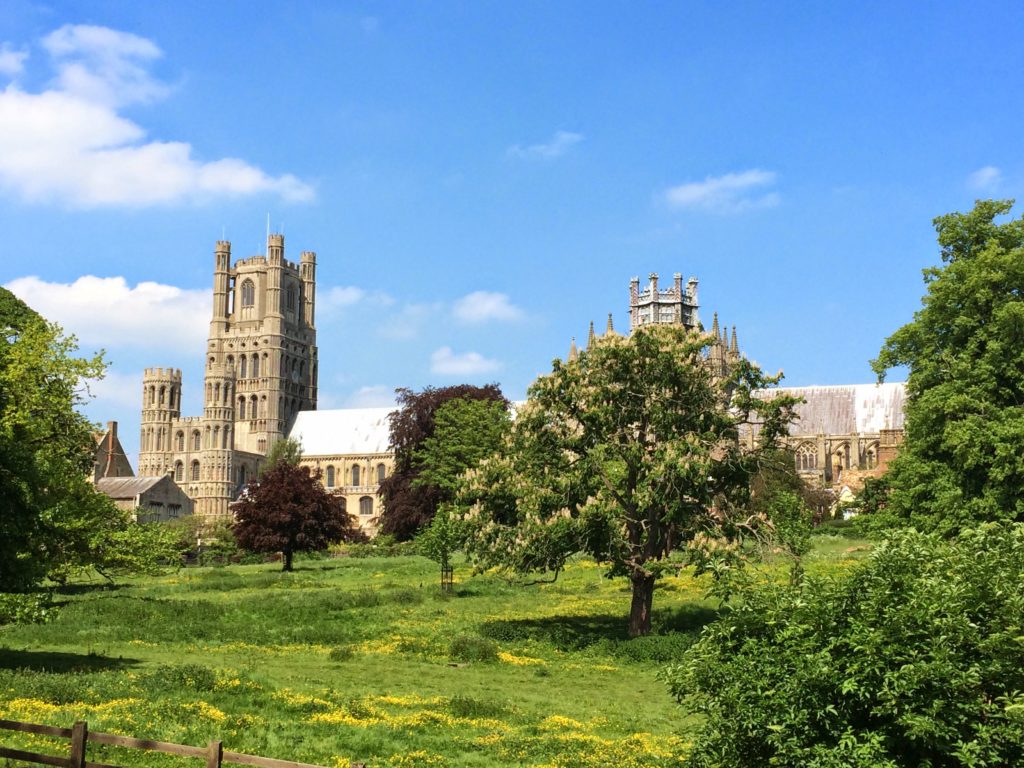 Some years ago, the very first time I went to Mass at Ely, in Cambridgeshire, I was struck by the beauty of that magnificent cathedral rising out of the lush and picturesque countryside.  At coffee after Mass in a little rented hall down the street from that beautiful structure, some parishioners recalled the last time Bishop Sanborn had visited Ely.  "During the sermon," they said, "he referred to 'the beautiful cathedral, nevertheless replete with the trappings of heresy.'"  They placed particular emphasis on these words and tried to imitate the Bishop's diction.  I laughed, of course, but on recalling that conversation on this chilly Spring day outside Canterbury Cathedral, I was reminded of this stark reality.

Traditional Catholics would like to consider themselves uniquely and particularly aggrieved.  It helps us feel better.  But how must English Catholics have felt, centuries ago, as they were fined, arrested, tortured, and executed out of adherence to their religion, even as they professed allegiance to the very monarchs that carried out these crimes?  I can glance at a statue of Thomas Cranmer over the entrance to this cathedral with my modern Trad numb bemusement, but how it must have burned the souls of Catholics to watch such a statue carved there in the first place.  Modern Catholics in England are merely ignored as benighted.  Hardly a persecution in any sense of the word.

Those of us in Europe are spoilt for beautiful churches, and those ancient ones in England, though interiorly compromised in every way one can conceive, still bear, in their soaring structures, a lasting and unwavering witness to the Age of Faith.  As we attend Mass in our rented halls, amidst postings for yoga and other community activities, while thieves wander lost among those treasures, we remember with the English Catholics of centuries past the words of St. Athanasius: "They can occupy our churches, but they are outside the true Faith. You remain outside the places of worship, but the Faith dwells within you."  Let our hearts be fit dwellings for that ancient and true Faith. 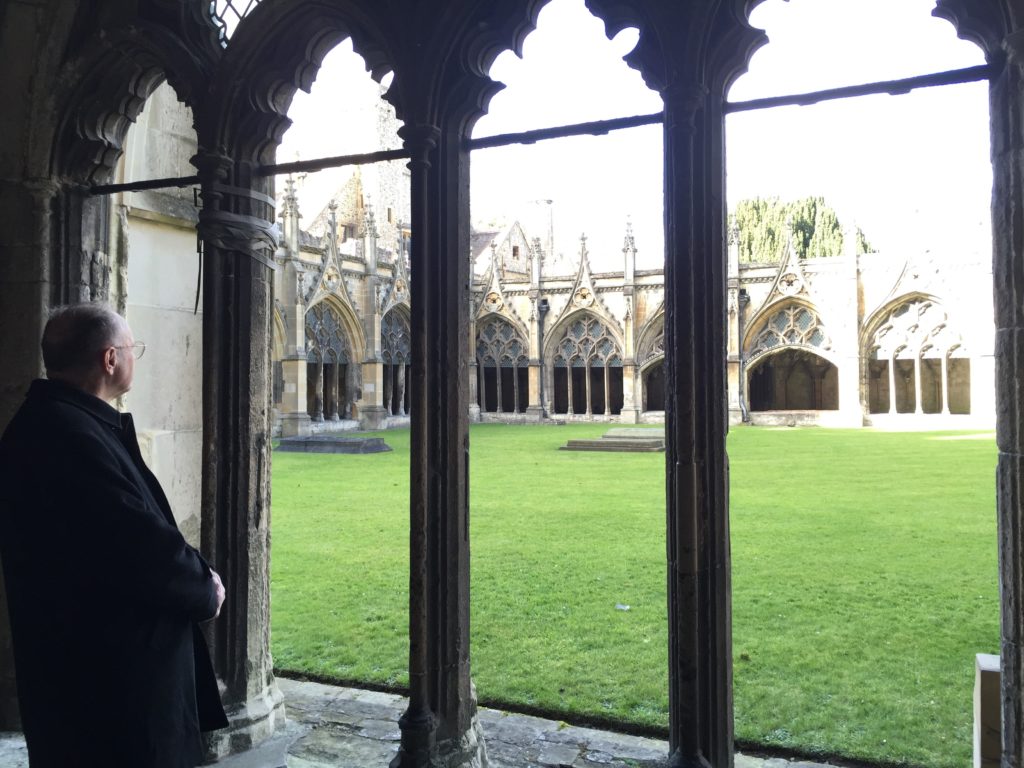 All photos that appear in this story were taken by me and may be used under Creative Commons license, with attribution.