Exterminating Poverty: The true story of the eugenic plan to get rid of the poor, and the Scottish doctor who fought against it.

A fascinating account of the Catholic Dr. Halliday Sutherland’s fight against eugenics, including numerous quotes from published statements, many from transcripts of heated legal battles. The story involves a subject which has had profound effects on the course of civilisation over the last century, and has since firmly entrenched itself in this century, presented in an engaging manner. Displaying the incredible deception, competition, ruthless disregard of human life and intrigue in the sphere of scientific research, this study betrays that with some key figures it is to a great extent personal-philosophies-driven rather than unbiased-research-based. Yet, thanks to the main author’s inspiration to find out the facts about his grandfather’s work, we can all now be inspired by one of the medical researchers in that critical era who swam against the tide – and maintained his scientific moral-integrity, despite the corrupt atmosphere. 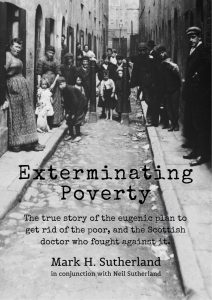 Like G. K. Chesterton,*  who criticised the discipline of “Eugenics” founded by Francis Galton, cousin of Charles Darwin and stimulated by his “Origin of Species,” describing it as “one of the most ancient follies of the earth” which aligned with the “modern craze for scientific officialism and strict social organisation,” Dr Halliday Sutherland openly defied the British eugenics society founded by Marie Stopes, and supported by some of most notorious public opponents of Catholic principles at that time, including Julian Huxley (brother of Aldous Huxley), George Bernard Shaw, Lady Constance Lytton, Bertrand Russell and H. G. Wells.

Strikingly, the language of the eugenicists at that time is shockingly audacious – how anyone can actually say such things keeping a straight face is mind-boggling. Such hubris is astonishing even in this day and age.** Anyone who has been even slightly keeping across what Bill and Melinda Gates have been espousing over recent years will immediately recognise the same style, and essential nature, of their statements as these early 20th _century eugenicists; of which Gates buds forth from the same stock (both genetically and from his ideological schooling). The relevance to our times is noteworthy, not least from the evil moral effects in our current society from the widespread influence of such organisations as that founded by Stopes, and its American counterpart, Planned Parenthood, which are among the most active and pernicious manifestations of the “Organised Forces of Naturalism,” but also in the draconian globalist agendas being rolled out before our very eyes, including the mandatory vaccination campaigns, which all stem from their naturalistic and Darwinian-based population-control philosophies.  The fact that historically-influential figures and families are adherents of this method of Natural Selection is critical to understanding a significant aspect of the worldwide policies, along with the systematic corruption of Faith and morals, which are integral to their anti-supernaturalist cult of death.

Hiding her true colours under writings with innocuous-sounding names such as, “Wise Parenthood,” “Married Love” (involving input from Margaret Sanger,*** shortly after her July 1913 lecture on birth control at a Fabian Society meeting) and “A Letter to Working Mothers on how to have healthy children and avoid weakening pregnancies,” Stopes, just like her successors, advocated artificial birth control (birth prevention), as well as artificial insemination, and selective sterilisation of members of society whom she deemed unworthy of having offspring.

While Stopes’ advocates today frame her efforts as “pioneering work bringing contraception to women in the UK” the book reveals the reckless way in which she pursued her goals, even exposing women to great danger. For instance, in Wise Parenthood Stopes promoted a device known as the “Gold Pin” which she wrote was “the one and only method (apart from actual sterilisation) which is applicable and of real help to the lowest and most negligent strata of society. It is therefore a method of the greatest possible racial and social value if its further use proves to be satisfactory. If not, such cases should be sterilised.” Her recklessness was exposed in the High Court in 1923. One eminent doctor described the Gold Pin as a “barbarous instrument” and even Stopes’ own medical witnesses did not like the device. Medical experts disagreed on the effects of the Pin (some said it promoted conception, others that it prevented conception, and yet others that it would cause miscarriage/abortion). One doctor produced a Pin in court which, he said, had become embedded in the body of a woman who "was running a very, very considerable risk, not only to her health, but to her life." Despite the uncertainty and risk, Stopes sent two women to a doctor to be fitted with the Gold Pin (the doctor refused on the grounds that it was unreliable and dangerous). According to Germaine Greer, a writer not known to be unsympathetic to either feminism or contraception, these actions showed Stopes’ “... utter disregard for the rights of others and her total ignorance of a code of ethics... “

The book concludes by mentioning Marie Stopes International (MSI) a British “charity” that provides contraception, sterilisation and abortion in 37 countries. In 2018, MSI received donations of £158 million and facilitated 4.8 million abortions. The author points out that other than the name, and the fact that it is headquartered in Stopes’ second clinic (at 108 Whitfield Street, Fitzrovia, London), there is little resemblance between MSI and Stopes’ eugenic project.

On MSI’s website they tell the story of how their founder, Dr Tim Black, changed from being a medical doctor to a birth controller. In the late 1960s Dr Black was a district health officer in Papua New Guinea and he saved the life of a three-month old girl. When he presented the girl to her mother “he was shocked that her widowed mother — who already had five children and no steady income — didn’t want her to survive. Explaining that his shock ‘was absolute,’ Black reflected that he ‘suddenly realised that I had presented her, not only with her baby, but with another mouth to feed, another dependent human being to whom she could offer nothing: no father, no education, no future. It was at that point that I began to realise that preventing a birth could be as important as saving a life.’”

At this point the author juxtaposes a quote Havelock Ellis (a friend of Stopes) who in his 1912 The Task of Social Hygiene wrote: “The superficially sympathetic man flings a coin to the beggar; the more deeply sympathetic man builds an almshouse for him so that he need no longer beg; but perhaps the most radically sympathetic of all is the man who arranges that the beggar shall not be born.” Despite the years that separated Black and Ellis, they both made essentially the same point.

As so well summarised in the Introduction, “In its time, the Stopes v Sutherland libel trial was known as ‘The Birth Control Libel Trial’. This book aims to show that, more than just a spat about contraceptives, the conflict was part of a wider and longer-running struggle between those who advocated population control, and those who opposed it. It is a conflict that continues to this day.”  In this regard, one revelation of the book is to show the continuity between the eugenicists of one-hundred years ago and eugenicists today albeit with a change of clothes to disguise their appearance. This is important because, to the uninitiated, the eugenicists of the British Edwardian elite had no influence on what is happening today. In 1960, membership of the Eugenics Society had halved from its peak in the 1930s. To reverse this trend, the Honorary Secretary suggested “That the Society should pursue eugenic ends by less obvious means, that is by a policy of crypto-eugenics, which was apparently proving successful with the US Eugenics Society.” Which is precisely what is happening.

Once you pick up this book, you won’t be able to put it down! Peppered with witty remarks, and extensive footnotes, to enliven any dullness that might be expected in an early-20th-century English courtroom, the reader is amused and edified by insertions such as:

“Roberts replied it was a matter of opinion. He continued to avoid answering questions in keeping with the best traditions of British politicians before and since.”

“The peculiar banter between advocates was formal, impeccably polite and even, at times, obsequious. Yet the legal battle was no less vicious for it.”

“In reference to the Birth Control Libel Case…[Dr Sutherland] said that he had regarded it as an honour to represent the Catholic point of view.”

“For his part, Sutherland was well-prepared for the cross-examination. He had fortified himself by praying to St Thomas More, the Lord Chancellor of England who had been beheaded for adhering to his Catholic faith in defiance of a tyrannical King.”

“Cardinal Bourne wrote to Sutherland on 2nd March 1923 to tell him: ‘Monsignor Coote has just telephoned me the result of the action and I hasten to send you my heartiest congratulations. May God bless and reward you for your plucky and persevering fight for purity and morality.’”

Hot off the press this past fortnight, in its inaugural printing, this captivating and enlightening historical report is a highly-recommended work, worthy of its place in the library of Catholics interested in serious social issues. However, due to the graphic terminology associated with the subject matter, it isn’t recommended for most unmarried people, and is certainly unsuitable for children.

Now available to buy from Amazon (US, UK and Australia): https://exterminatingpovertybook.com/buy/

*Chesterton went on to praise Sutherland’s writing in 1934, noting also his being “distinguished in medicine.”

**Some examples of unbelievable audacity and hubris (Spoiler alert): Stopes repeatedly claimed, both in written publications and in a court attestation, that she was a Divine Prophet transmitting messages from God. Among these blasphemous claims, she alleges God told her to “Say to my Bishops,” that He commanded couples should use the best means of birth control “placed at man’s service by Science.” Stopes, additionally, specified the problem as: “…the vast and ever increasing stock of degenerate, feeble-minded and unbalanced who are now in our midst and who devastate social customs. These populate most rapidly, these tend proportionately to increase, and these are like the parasite upon the healthy tree sapping its vitality…” Furthermore, Stopes wrote that she “would like to see the sterilization of those totally unfit for parenthood made an immediate possibility indeed made compulsory” and elsewhere, “…it is racial madness to rifle the pockets of the thrifty and intelligent who are struggling to do their best for their own families of one and two and squander the money on low grade mental deficient, the spawn of drunkards, the puny families of women so feckless and deadened that they apathetically breed like rabbits.” (You will be forgiven for noticing the similar phraseology of Bergoglio in 2015.)

***Later Stopes (not surprisingly) alienated Sanger, and given Greer also openly criticised Stopes in one of her odious books, one perhaps fears to linger on the potentiality of catfights between these pioneer raging feminists.