“Is the Pope Catholic?”

by Hugh MacDonald · August 16, 2015
That used to be a rhetorical question, much like “Is the sky blue?” or “Is grass green?” but ever since the Second Vatican Council wound up in 1965, it has been increasingly difficult for the faithful to discern the Catholicity of the Church hierarchy. Not to worry: our host and roving reporter Stephen Heiner has once again enlisted the help of Bishop Donald Sanborn and Father Anthony Cekada to unmask Conciliar duplicity, and to demonstrate the logical and uniquely tenable position of Sedevacantism in the face of the debacle that is Vatican II.
True Restoration Media has just released a DVD, Sedevacantism: A Primer (NTSC format, $29.99), which includes an excellent conference by Bp. Sanborn in December 2013 on “The Fundamental Principles and Common Objections”, and a more conversational video with Fr. Cekada from 2011 entitled “Sedevacantism: How to tell Aunt Helen”. I had to chuckle at the second video’s title, because I actually had an Aunt Helen, and she would have been in dire need of a DVD like this! 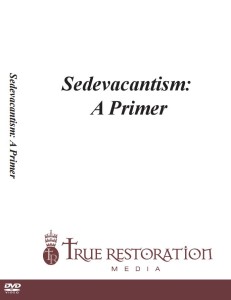 Imagine St. Thomas Aquinas sitting beside the few conservative Cardinals at the Council, aghast and beside himself with having to put up with all the Modernist gobbledygook that the Liberals were promulgating! That’s kind of the impression I got from Bp. Sanborn’s exposé. He dissects the main problems, leads us through to the choices we are faced with, and unerringly presents the only logical position. A perfect syllogism. He asks us if the religion (the ensemble of doctrines, disciplines and liturgical practices) of Vatican II is Roman Catholicism or not. His Excellency shows that ecumenism, religious liberty, a new conception of the Church, collegiality, and relativism of truth were the most objectionable doctrines that came from the Council, to the extent that the pre-1958 Church and the Church of today could hardly be recognized as the same religion. He demonstrates that it is impossible that the authority of the Catholic Church can promulgate false doctrine, evil discipline and false liturgical practices, and therefore if Vatican II represents a substantial change to the Catholic Faith, it cannot have come from the authority of the Church. Sedevacantism is the only logical conclusion.
Bp. Sanborn explores three positions of reaction to Vatican II, answers the seven main objections to the Sedevacantist position, and in the remaining 50 minutes takes questions from those attending the conference.
The video itself was shot in less than perfect conditions. Poor lighting made the image a bit grainy and also induced the photographer to periodically adjust the focus. Although His Excellency’s image was sometimes blurred, his train of thought was crystal clear, making this presentation a must-see.
Lean back in your La-Z-Boy with the second video by Fr. Cekada, as Stephen asks Father how he came to be a Sedevacantist. Here we have a personal journey which parallels that of many today, starting with a disenchantment with the new Mass and the blatant errors of doctrine, discipline and worship that came out of Vatican II. Although Fr. Cekada describes himself in the sixties as a neo-con, wanderer Catholic, he was all too ready to stick with the Pope with the assurance that everything would be all right. He came to realize, however, that the problem with Vatican II was not one of interpretation: it was everything! His search led him to the inevitable conclusion that the changes were evil, and since evil cannot come from the authority of the Church, therefore those in the Church hierarchy must not have the authority of the Church.
Fr. Cekada goes on to examine the arguments of the Recognize and Resist traditionalists, and shows how theirs is not a Catholic position. He notes that people don’t want to discuss the possibility of Sedevacantism, afraid of the consequences, looking over into the abyss. Traditionalists are already all Sedevacantists, except they haven’t figured it out yet, according to Father. People will have to do the hard work; look it up and investigate.

These are two very convincing video presentations, available for purchase on one DVD here.