Paradoxes of the Panic Pandemic – Reflections from Downunder

Our modern world has been very, very naughty, and now we find ourselves grounded, sent to stand in the corner, isolated, six feet away from everyone else lest we find ourselves “six feet under” from fear of catching a bug. By all appearances, one logical result of the near-unanimous reaction of our governments causing this global lockdown, is an economic collapse of grand-scale ramifications. Is our spanking next?  The sins of the world –  including our own – arguably, constitute a burden of iniquity of unimaginable proportions; the spanking might be a big one if mankind doesn’t accept this enforced donning of sackcloth and ashes in the correct spirit.

Being in house-arrest, deprived of access to Mass and the Sacraments, has its pros and cons. Aware that all things ultimately come from God, how can we benefit from our sudden and shocking radically-altered circumstances? No longer driving 40 minutes each way to our chapel for Mass three or four times per week has given me time to substitute (downgrade) to doing more spiritual reading, private prayer and reflection during my compulsory home-retreat, even with having to now do grocery store crawls for “essential” supplies that are either not available or being rationed per family not per person, since the usual home-delivery service isn’t an option anymore.

Whilst trying to find sense of what seems such a senseless situation, pondering some possibilities of the purpose or purposes of it, one of the first realisations was that I had a false sense of security in natural structures and systems, taking for granted what shouldn’t be taken for granted. Though I have no dread about dying from this mystical Covert-19, just as I had none of dying of any flu, any corona virus or being struck by lightning in any previous year – thus, what I took for granted has no relation to any concern whatsoever along those lines – rather, having freedom to practice our Faith as God intends by assisting at Mass, at least on Sundays, is something so easily and quickly taken away from us by any reason or pretext by our earthly masters, or some other unforeseen cause. Yet God allowed it, what can we learn from it? If accepted with patience and resignation we can surely be sanctified more despite this sacramental deprivation imposed on us by others. As we are forcibly detached from certain practices, habits or any creatures during this exercise, we could benefit by willingly embracing the removal of these attachments, supernaturalising it by accepting it all for the love, and greatest honour and glory, of God. For those living in any district that hasn’t absolutely forbidden going to places of worship, I hope an irrational fear isn’t preventing such rarely-fortunate from looking after the health of the soul first and foremost, by continuing to go to Mass…the day may arrive when you seek for Our Lord and cannot find Him and where He is thither you cannot come. Besides, I don’t know about the rest of you, but if I thought there actually was a high risk of dying from this thing, the prospect of catching it as a result of going to the Sacred Liturgical Ceremonies seems far more glorious, both to God and myself, than catching it on a trip to the grocery store to get chocolate, ice cream or that privy paper which is more elusive than the Scarlet Pimpernel, himself!

The Panic Pandemic has also been a striking reminder that we should be taking one day at a time, being “not therefore solicitous for tomorrow,” as the Gospel teaches us, because it has become very obvious, given the rules and restrictions that are tightening almost daily, that we really have no idea of what tomorrow might bring, so planning even so little as that far ahead is futile; as for the volumes of nonsense spewing forth from the mainstream media, scientists-cum-demigods and political sock-puppets about an electron-microscopic foe and what must be done about it, then subsequently parroted with religious assent by their mass of disciples (“Amen, I say to you, I have not seen such great faith in Israel” comes to mind), “sufficient for the day is the evil thereof.”

Laughable was my presumption when in January I marked every day in the 2020 Catholic Calendar that I could, and hence would – so I thought –  take four of my children to Mass for us all to do the Raccolta devotion #657, “A Day dedicated to the Sanctification of the Clergy” bearing a plenary indulgence, which requires Mass, Communion etc; already two of those small number of available days this year have ceased to be an option, courtesy of the closing of all places of worship, and religious gatherings (even in private homes) being verboten. If only five people reading this who are blessed with access to Mass and Communion this Holy Thursday (which is one of the days it can be fulfilled), complete the requirements for this devotion in our stead, it would render the time I spent serving as TR’s Australian correspondent to serve our readership, more worthwhile. 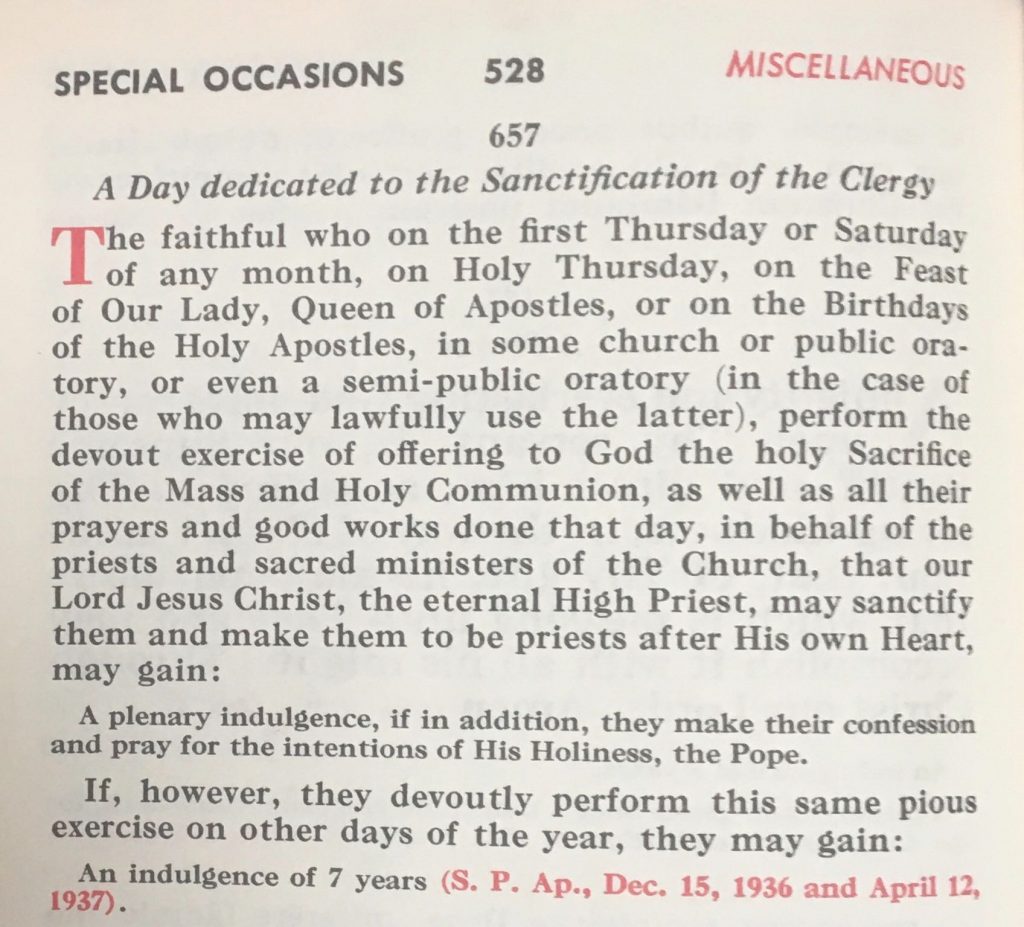 A Day dedicated to the Sanctification of the Clergy

Regarding those afflicted with the far more lethal epidemic of Naturalism, who obstinately refuse to acknowledge the existence of the supernatural, or preternatural, on the grounds that God and His invisible creation are not concrete entities perceivable with our senses: marvel of marvels is their blind faith and belief in this invisible enemy and imperceptible pandemic; great is their trust in the omnipotence, veracity and wisdom of mere men, whose closest working to that of a miracle is that they have somehow managed to convince virtually the entire world that one of the so-called viral-strains, that come and go, warrants societal auto-demolition.