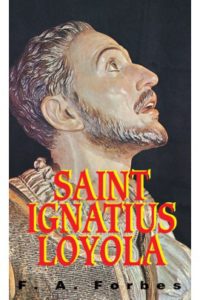 Many of our readership would be familiar with the series of saints’ biographies by F. A. Forbes, characterised by their brevity and simplicity.  This one about St. Ignatius Loyola is true to form and is a very quick and easy book to breeze through, yet along the way it is very inspiring and edifying – which fulfills the primary purpose of reading the lives of the saints. It is truly an action-packed 94 pages with the bonus of a smattering throughout of black-and-white prints of significant paintings.

Along our brief and salutary journey, we enjoy a crash-course in the history of St. Ignatius’ striking conversion of life with the concomitant establishment and illustrious activities of the Society of Jesus, also known as the Jesuit Order. We meet a number of other marvelous saints on the way, throughout Europe and beyond, including: St. Peter Faber, St. Francis Borgia, and St. Francis Xavier, and mention is made of the additional Jesuit Saints Peter Canisius, Aloysius Gonzaga, Stanislaus Kostka, Edmund Campion, John Ogilvie, John de Britto, Peter Claver, and John Francis Regis, and the Blesseds Claude de la Colombiere and Charles Spinoza.

Famous sayings of our saint are found herein, such as his Scriptural quote to St. Francis Xavier in the dark Parisian street, “What doth it profit a man if he gain the whole world and suffer the loss of his own soul?” and his customary farewell to his companions, “Set all in fire and flame.” No biography about St. Ignatius would fail to mention the origin of our customary acronym +AMDG+ which stands for his maxim, Ad Majorem Dei Gloriam – “For the greater glory of God.”

Some background and examples of the great successes of his “Spiritual Exercises” are provided, along with other interesting and laudable Jesuit involvement at the Council of Trent; whereby the Pope pronounced two Jesuits as Papal theologians – despite one of them, namely Salmeron, being only thirty years of age!

Historical background of another popular Catholic devotion is given, thus: “A short time before his death, Ignatius heard that when, during the carnival of Macerata, a play was to be acted that might do harm to young people, the Fathers of the Society had ordered exposition of the Blessed Sacrament for three days, with the result that the people had flocked to the church and given up the play. Ignatius was so pleased with this idea that he ordered that the devotion of the Quarant’ Ore (‘Forty Hours’) should take place in all the houses of the Society during the carnival. The practice has since extended to the whole Church.”

Our zealous and heroically virtuous man, and great leader of men, “passed away in peace and calmness with the Holy Name on his lips.” May we all pray to this powerful intercessor in heaven, that we too may end our earthly sojourn in the same way, so as to follow him to the eternal reward.

The verdict is that this title would enhance every Catholic's personal library. Moreover, being suitable reading for children of all ages renders this even more prized for its versatility. With his feast day coming up later this month (on the 31st), now is the time to read this book to learn about, and more importantly to learn from the example of, this July saint. You will then understand why True Restoration is proud to be dedicated to him and securely under his patronage.

*Author’s note: In first reading this book, quite a while before writing this, I penciled in various notes and asterisked portions that I thought might be useful in preparing this review. Later, when it came time to draft this article, I noticed at the top of page 31 that I had jotted down the following: “9 6 11” then a tally symbol denoting seven, ending with “34” underlined with two dashes.  I now have no idea what I seem to have been counting, nor why I made these annotations! If any of our readers have any ideas as to what I may have been recording at this stage of the book, please email and tell me your guesses, as I am curious to recall what method (or madness) I employed on this page during my initial perusal.