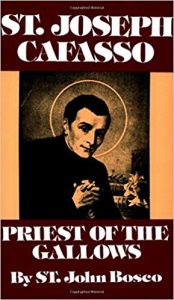 “St. Joseph Cafasso: Priest of the Gallows” is a compilation of two panegyrics preached by the illustrious saint of youth, St. John Bosco, about his dear friend and mentor shortly after his death. Who is St. Joseph Cafasso, you ask? A look at his face and a study of his life, and he seems more angelic than human – such was the purity of his life and the greatness of his virtue. St. John Bosco remarks, “For his death was a loss for the good, a misfortune for the poor, a disaster for the clergy and a public calamity for religious.” It is truly a wonder that he seems to be so hardly known in our times; then again, that’s what he would prefer in his humility.

His sanctity began in his youth and grew on and on throughout his life. As a boy he acted the part of leader, nay apostle to his young companions – much like his future pupil St. John Bosco. He led them to all that was pure and holy, drawing them closer and closer to the Almighty. “He regarded the day most happy for him when he was able to give some good advice, to promote some good or to prevent some evil.”

It was during his life as a clerical student that our two saints – author and subject – first met. Don Bosco being just a lad at the time saw the young cleric waiting at the church door whilst the town prepared for a great feast. Captivated, young John went forth to meet him and offered to be his guide about the town. Always the dedicated servant of God, our saint inquired into the spiritual life of John Bosco: had he made his First Holy Communion, how often did he go to confession, and the like.

The still captivated John repeated his offer numerous times more until the conversation ended with a final decline to young Bosco’s offer and these memorable words exemplifying the program of our saint’s life: “He who embraces the clerical state sells himself to the Lord, and must henceforth set his heart on nothing in the world except what can redound to the greater glory of God and the advantage of souls.”

Can one walk away from this book without a stronger conviction to do good; to serve God wholly; to love God and neighbor more; to become a saint? I think not. Clerics we are not, but saints we can become. Are we not all called to set our hearts on naught of this world, but our beloved God above? Such wonderful examples and inspiration for the pursuit of sanctity in our own lives and we are not even up to to his life as a priest – all these examples are from his youth! How he puts grown men to shame!

It is needless to say that his sanctity only continued on throughout his priestly life ending only with his death. His time as a priest was divided between his being head of a college for the training of young priests, caring for the poor boys of Turin, and perhaps what he is best known for, seeking the far lost sheep among the prisons and upon the gallows – dealing with the most noted of criminals. What courage God gives those who love and serve Him! All this beautifully portrayed as only a close dear friend could and filled with our saint’s wise and pious sayings.

What truly strikes the reader, however, is the profound zeal St. Joseph Cafasso had for serving Almighty God and bringing others to him. Such efforts necessitate a deep spiritual life which our author reveals to the reader – unfolding a hidden world which only close companions would ever know and how very much still they would never know - if only walls could talk!

Among the true gems is the account of his holy death befitting one bearing the name of the Patron of a Holy Death. During his last time spent in the confessional, when he knew the end was near, we read the spiritual advice of a dying saint: “He recommended all to detach their hearts from earthly things, to love God their Creator with all their strength, to pray Him to take them away soon from the dangers of this life and bring them to Heaven. ‘O Paradise, Paradise,’ said he to one penitent, ‘why are you not sought after and desired by all? Why do you delay? Why, oh why?’”

In his final words he holds in disdain any ambition for pride and seeks to be completely forgotten by mankind: “When I shall have departed to the grave, I pray the Lord to make my memory perish on the earth so that no one will think of me except those few faithful ones who will, as I hope, come to pray for my soul. I accept in penance for my sins all that will be said against me in the world after my death.” But alas, forgotten he was not, and by the will of the Almighty, he was raised to the honor of the altar and set as an example for us to study and imitate.

To conclude with the quote we began earlier: “But if we consider our loss [our saint’s death] in the light of faith, we have good reason for changing our grief and lamentation into consolation and rejoicing. For if we have lost a great benefactor on earth, we have the firm confidence that we have acquired a friend in Heaven who will use his influence with God to protect us.” So then learn of his life, imitate his virtues, and make him your heavenly friend and patron. The time will inevitably arrive when we must at last pay the common debt of our fallen nature and await that final blow upon the scaffold of our deathbed – we’ll be in need of priest – the Priest of the Gallows: St. Joseph Cafasso!

Alexander Krawczyk is a cradle Catholic, living in Florida, who hopes to help the Church and spread the true faith via his work for True Restoration. He is strong advocate of the Total Consecration to Our Lady promoted by St. Louis de Montfort.