Season 2, Catholic History with Charles Coulombe, Episode 7: Catholicism and the South, Part I 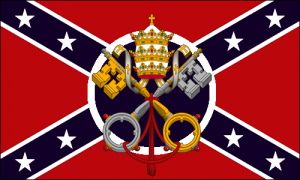 How often do we Catholics hear that Protestantism in the United States has ruled the South and that Catholicism had no pride of place, neither historically nor currently? Well, how much do we really know about Catholic history in the Old South? Hopefully we know enough to know that the first assertion is complete nonsense.

What does the antebellum period in the Southern United States tell us about Catholicism, and what happened to it during the War Between the States and in the "reconstruction" years? How is a Catholic to understand the successive chain of events that took the United States from the War of Northern Aggression of 1861-1865. In this first installment of our two part miniseries on the United States War of Southern Independence, we will look at the lead up to and the time of the War itself. The culture, ideas, ideologies and influences that affected the minds of American Catholics.

Join us as our distinguished guest Charles A. Coulombe talks with hosts Justin Soeder and Nicholas Wansbutter about this very rich topic of Catholic History in the South and beyond and imparts his wisdom and insight on the Catholic Church and the American South, Part I.

Catholic History with Charles Coulombe℗ is a presentation of the Restoration Radio Network. Copyright 2013. All Rights are Reserved.