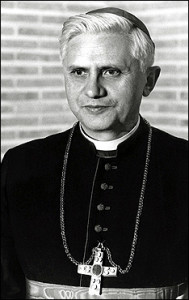 On this episode of the Flagship Show, we will conclude our discussion of Benedict XVI with the second part of this series on the legacy of Benedict XVI.

Following his April 2005 election after the death of John Paul II, it was widely predicted that there would be stark differences between Benedict and John Paul II. Many had forecast that the "reform-of-the-reform" had begun with "God's Rottweiler" at the helm. Most pundits had foreseen Benedict ratcheting back on the Vatican II changes, the liturgical absurdities, and preparing a place of welcome for disaffected traditional Catholics who wanted the Traditional Latin Mass. Now that we have the final chapter closed on Benedict's time in Rome, what really can be said about the years 2005-2013?

Our guests will be Bishop Donald Sanborn, rector of Most Holy Trinity Seminary in Brooksville, Florida and Fr. Anthony Cekada of St. Gertrude the Great Catholic Church in West Chester, Ohio. Both His Excellency and Father have studied Benedict XVI and his actions over the years and have much to share about Ratzinger's theology.

This podcast is Part 2 of a 2 part series. For Part 1, Click Here