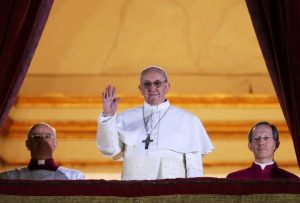 On this episode of the Flagship Show....Habemus Papam?

Well, the next broke yesterday that the conclave of modernists have selected the next Vatican II claimant to the chair of Peter and there is a lot to talk about already.

Join us as Bishop Donald Sanborn, rector of Most Holy Trinity Seminary in Brooksville, Florida and Father Anthony Cekada of St. Gertrude the Great Catholic Church in West Chester, Ohio weigh-in and discuss the background of Cardinal Jorge Bergoglio and his actions since his election. From this man's history in Argentina, we can already talk about his attitude toward "liturgical abuses" and the traditional Mass. Of course, there is no shortage of ecumenism with Jews, Anglicans and Evangelicals. It clear from his first actions that we can certainly predict diminishing of the papacy and a disappointment to the Benedict XVI conservatives. We see early on that "humility" is on parade. Is this man a "Paul VI resurrected"? Make no mistake, the Ratzinger agenda has been dumped in favor of a more radical course. Where does this leave the "neo-cons?" Will they engage in a "hermeneutic of denial"? As always, The Second Vatican Council is the ultimate root of the problem. After all, one balloon says a thousand words!

Francis Watch · Francis Watch, Episode 0.01: Habemus Papam? Francis, the New Claimant
To gain unlimited access to all Restoration Radio shows, you can become an Annual member by clicking the link below.