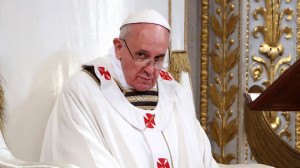 On this episode of the Flagship Show, we zoom into focus on the recent news coming out of the Modernist Vatican which is surely a huge indication of where Francis stands on the traditional mass and doctrines.

On the Novus Ordo feast of St Benedict, July 11, Francis contradicted the previous claimant, Benedict XVI, by beginning the rollback of the Traditional Latin Mass, at least within the post-Vatican II church. Father Anthony Cekada, assistant pastor of St. Gertrude the Great Catholic Church in West Chester, Ohio joins us on the Flagship Show to discuss the implications of this shocking (not to those who knew that Francis' episcopal conduct was a preview of what his non-pontificate would look like) and what we can see next.

Father Cekada is a leading worldwide authority on the Traditional Mass and was the first to coin the term "Motu Mass."  He is the author of Work of Human Hands, a theological critique of the Mass of Paul VI.

Francis Watch · Francis Watch, Episode 0.03: Franciscan Friars of the Immaculate Feel the Wrath of Francis
To gain unlimited access to all Restoration Radio shows, you can become an Annual member by clicking the link below.