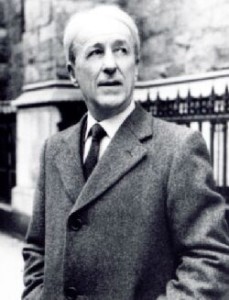 On this episode of the Flagship Show, we will discuss another icon in traditional Catholic lore: Malachi Martin.

Malachi Brendan Martin, S.J. (1921-1999): one of the most endearing yet controversial figures in the traditional Catholic world. Roman Catholic Jesuit priest, Vatican insider, exorcist, professor, curial advisor, author, public speaker and giant personality - Martin was a character whose presence seemed to be always in the know, yet his history is mired by hearsay, rumor and allegation. Are those rumors true? What are we to make of this man?

The author of many books on the crisis in the Catholic Church following the Second Vatican Council, Martin's books have been instrumental in at least some way of shaping the "Church-view" in the minds of traditional Catholics.

Just who was Malachi Martin? What is his legacy as a Priest and man who bridged the gap of time between pre and post Vatican II? What was his motivation to be such an outspoken critic of the Novus Ordo hierarchy, even some whom he called out as Satanists? As one of the few human beings who have claimed to have laid eyes on the Third Secret of Fatima, Malachi Martin is a name who cannot be ignored and with whom most traditional Catholics are at least tacitly familiar.

Join us as His Excellency, Bishop Daniel Dolan of St. Gertrude the Great Catholic Church in West Chester, Ohio is joined by hosts Justin Soeder and Nicholas Wansbutter to discuss this most notable figure and the criticisms which accompany him.

More Transcripts available here.
The Flagship Show℗ is a production of the Restoration Radio Network. Copyright 2013. All Rights are Reserved.