This month on Clerical Conversations on the Crisis, we return to the air after our summer break with a tour de force of solid Catholic commentary on many news stories which have arisen over the Summer of 2014 A.D. across the globe and also in the United States.

We begin by dispelling the naturalist concept that has been force-fed down the throats of both Clergy and laity alike that the Clergy have no business commenting on politics, political affairs, or current events that do not touch directly on matters of the faith. All the topics covered in this episode, as His Lordship correctly points out, are topics that must be viewed from the perspective of the Social Kingship of Our Lord Jesus Christ in order to understand correctly the problems themselves and what we as Catholics are to think about them.

The first order of business on this episode is discussing the principles of war, what constitutes a just war, and how modern warfare has morphed into something absolutely horrific. Why is it that the United States of America has been at war since the birth of nearly every single person reading this text and what has been the goal of those perpetual wars? Whose interests are being served? As Our Lady of Fatima said, war is a punishment for sin. Why does it seem that so many Americans are so accepting of endless war and touching the topic of our last episode, what role has State propaganda played in shaping this acceptance and support? How has this policy led us to the horrific tragedies that we have seen over the last few weeks of the beheadings of journalists James Foley Wright and Steven Sotloff at the hands of the Mohammadans? 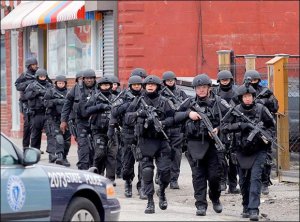 Turning our attention to the United States, the latest news from Ferguson, Missouri is yet another display of the state of affairs in civil society which is becoming less civil by the day. The situation is spiraling completely out of control into civil unrest with lootings, murders, and rampant violence. Once again, in a similar vein of the Boston Marathon incident in 2013, we see the militarized police state on display in the city streets of the United States, wielding military firepower, armored personnel carriers, and the latest in advanced technological weaponry. How is a Catholic supposed to view the disturbing spectacle of this wanton display of State power and how does this bode for the future of this nation? Once again, why have the fires of racial tension continued to be stoked and who is using who in these increasingly-frequent crises that pop up?

We then move into the ongoing conflict between Russia and Ukraine, with a good history lesson of those tensions and why it is once again that the United States seems to be front and center in these foreign affairs. Could an escalation of these tensions lead us to a true world war?

Lastly, we cover the summer story of the massive illegal immigration problem at the Southern border of the United States and discuss how Catholic principles should have us seeing a lot of different angles regarding this latest development.

Join us host Nicholas Wansbutter as he discusses these Summer events of 2014 with His Lordship, Bishop Daniel Dolan and Father Anthony Cekada of St. Gertrude the Great Catholic Church in West Chester, Ohio on this month's episode of Clerical Conversations on the Crisis.

Clerical Conversations on the Crisis℗ is a Production of the Restoration Radio Network. Copyright 2014. All Rights are Reserved.