This month on Clerical Conversations on the Crisis, we continue in a similar fashion with commentary which springboards off of last month's show to have a discussion about the military, what today's military culture is, and the Catholic response to it.

How do our puppet masters use the military as the action arm to advance their agenda through endless war and why does it appeal to the young -- even traditional Catholics -- so much? Is it real patriotism or is it something else?

We frame the discussion (once again) by examining the Social Kingship of Christ, and why before anything else, the Catholic faith must be the lens through which this topic can be studied. Father will lay out the principles of what a just war is, and will discuss why any of these modern wars cannot be viewed in any way as fulfilling the principles of a just war. We tie in the conversation with reflecting on St. Martin of Tours, who was conscripted into the Roman Army and later came to realize that his participation in the war with the Gauls was not compatible with his Christian faith - and refused to fight. 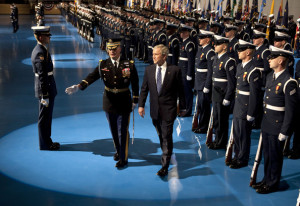 We look carefully at some wars and their destructive weaponry in modern history, their justification (or lack thereof) and whether or not a Catholic can have anything to do with the wars he sees raging around the world today. We will talk about military culture and what the human soul is exposed to in the petri dish of social experimentation that is the military. While we speak primarily of the United States military, we will also get a look at other militaries as conveyed by our host, who gives an interesting insight through personal experiences which prove that these issues are not singular to that of the institution of the United States military.

We also talk about how the celebration of the military culture has been made manifest in the hearts and minds of the average citizen in this country, and how wearing battle fatigues has created a caste system in society to elevate both military and police to a new level in the eyes of the citizenry. Is there a problem with this? Is there a problem with women in combat? Can a Catholic in good conscience volunteer to join the military and be absorbed into the leviathan that awaits him? What does it mean and can a Catholic be a conscientious objector to today's wars?

We recognize that this topic may be sensitive to listeners, but we ask that you listen with an open mind as Bishop Dolan and Father Cekada explain the stark realities behind the military culture, the unjust wars being waged in the name of freedom and democracy, the astronomical profits being accrued by the military industrial complex and our puppet masters, and much more.

Join us host Nicholas Wansbutter as he discusses these topics with His Lordship, Bishop Daniel Dolan and Father Anthony Cekada of St. Gertrude the Great Catholic Church in West Chester, Ohio on this month's episode of Clerical Conversations on the Crisis.

Clerical Conversations on the Crisis℗ is a Production of the Restoration Radio Network. Copyright 2014. All Rights are Reserved.