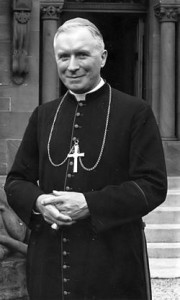 As we begin Season 3 of From the Pulpit, it is with great pleasure that we release a long forgotten conference given in English, from His Grace, Archbishop Marcel Lefebvre (1905-1991) given on May 11, 1976 in Minneapolis, Minnesota.

In this conference, His Grace lays out the modernist heresy, its origins and the beliefs of modernists which are contradictory to Roman Catholicism and in its very essence, a movement to establish a false religion rooted in freemasonry and naturalism. Naming names, times, places, and affiliations, the Archbishop lays out the foundations for why the Traditional counter revolution exists. Listen closely and hear the first hand perspective of conversations the Archbishop had to endure from the modernists who sought to destroy the Church through the reforms of the Council; a Council which the Archbishop clearly says cannot be viewed as good in any way.

For those who call themselves "Followers of the Archbishop," listen to his words, some 38 years later. Listeners can hear a show from last season we did with those who knew the Archbishop closely, from their time in the Seminary with him in Ecône.


To gain unlimited access to all Restoration Radio shows, you can become an Annual member by clicking the link below.

From the Pulpit℗ is a production of the Restoration Radio Network. Copyright 2014. All Rights are Reserved.