On this month's episode of Work of Human Hands, we will be discussing the results of the groundwork that was laid out in last episode, where we discussed the idea of theological makeover of the Holy Sacrifice of the Mass as an assembly. With all the groundwork in place to radically re-make the liturgy, now we focus on what those re-made aspects resulted in as it relates to the externals of both the Rite of Paul VI itself, as well as the externals of art, architecture, and furnishings in the sanctuary.

Have you ever walked into a Novus Ordo church and felt like you had walked into an abandoned airplane hangar? Ever had any trouble finding the tabernacle? How about stained glass windows depicting nothing? Was it missing statuary, stations of the cross, and a sanctuary lamp? These results were not the actions of "rogue bishops" as we often are told, but were specific instructions in both Sacrosanctum Concilium, the instruction Inter Oecumenici, and specific directives from the Bishops' Councils; who were becoming drunk on their newfound deregulated powers bestowed upon them by the directives of  Vatican II. 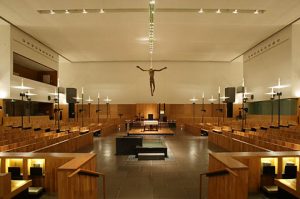 We will discuss the monumental change of versus populum, or mass facing the people, compared the ancient practice of ad orientum, or facing East. Contrary to popular propaganda of the innovators, this was not a return to antiquity, but a complete break with tradition which went back to the earliest stages of the Church and was spoken of by St. Gregory of Nyssa, St. Augustine, St. Thomas Aquinas and others. Father will talk about this "primitive Church" fraud that was concocted by the innovators, namely the usual cast of characters of Anibale Bugnini, Louis Bouyer, and Josef Jungmann, but also another Roman Liturgist, Father Alessandro Pistoia.

If you are wanting to know what the mechanism of action was and what edicts were issued to cause our beautiful sanctuaries to be stripped of their splendor, this episode is for you. If you are wondering how the vertical dimension of Catholic worship to God with its theocentric focus changed to a horizontal dimension of Protestant worship with its anthropocentric focus, Father will explain it. 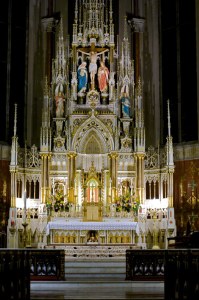 We will talk in great detail about the furnishings inside a Catholic Church versus a Novus Ordo Temple, the peculiar layout called for by Fr. Pistoia and the disturbing connection to freemasonry.

Then of course, we will discuss the vanishing tabernacle: something all of us have noticed how spent time in the Novus Ordo. Far too often, one walks into a Novus Ordo temple and could echo the same cry as St. Magdalen: They have taken away the Lord out of the sepulchre, and we know not where they have laid him.

The removal of the tabernacle from the center of the high altar was a cruel, calculated, and demonic directive from the innovators in two instructions given 1967, which should make any Catholic cringe. Father will discuss this and why it illustrates exactly the plan from the beginning of destroying the faith in the Real Presence.

Lastly, we will discuss the attempts to "spruce up" the Rite of Paul VI as we saw in the mid-2000s under Benedict XVI with his penchant for dragging the elaborate baroque mitres, the neo-Gothics statuary and jeweled chalices, the elegant fiddleback chasubles and tried to give the appearance of continuity to the Pauline Rite. Father explains why this simply does not work, and why the externals suited for the Tridentine Rite simply are alien to the Novus Ordo.

Join us as Father Anthony Cekada, author of the book and assitant pastor of St. Gertrude the Great Catholic Church in West Chester, Ohio is joined by host Justin Soeder as they conduct another installment of Work of Human Hands.

Work of Human Hands℗ is a Production of the Restoration Radio Network. Copyright 2014. All Rights are Reserved.