Season 4, This is Catholicism, Episode 7: On the Angels and Man and his Fall

On this episode of This is Catholicism, we welcome guest Father Nicolás Despósito and host Father Germán Fliess, seminary professors at Most Holy Trinity Seminary in Brooksville, Florida.

God has also created an invisible world -namely innumerable spirits called Angels. The good Angels love us; therefore they protect us in soul and body, pray for us, and exhort us to do good.

On Man and his fall: The sin of Adam was a sin of pride and grave disobedience. It was a very grievous sin; for though they were filled with the knowledge of God, yet they believed the serpent more than God, rebelled against Him, and wanted to be like God.

The First Article
'I believe in God the Father Almighty, Creator of heaven and earth.’

59. Has God created nothing else but the visible world?
60. In what state were the Angels when God had created them?
61. Did the Angels all remain good and happy?
62. How has God rewarded the Angels that remained faithful?
63. How are the good Angels affected towards us?
64. How do we call those Angels who are particularly given to man for his protection?
65. What is our duty towards our Guardian Angels?
66. How are the fallen or wicked Angels affected towards us?
67. Why does God permit the wicked Angels to lay snares for us?
68. What must we do on our part, in order that the snares of the wicked Angels may serve to our salvation?

69. How did God make the first man, Adam?
70. How did God distinguish man at his creation from all other creatures?
71. How was the first man the image of God?
72. In what do the ‘natural’ gifts consist?
73. In what do the ‘supernatural' gifts consist?
74. Why are the latter called supernatural gifts?
75. Did our first parents receive this Divine free gift for themselves alone?
76. On what condition did they receive these supernatural gifts for themselves and their descendants?
77. Did our first parents observe this condition?
78. What was the sin of Adam?
79. Was this transgression a grievous sin?
80. What punishment came upon Adam and Eve?
81. Did our first parents lose these supernatural gifts for themselves only?
82. In what does the misery consist into which our first parents have plunged the whole human race?
83. What do we call this sin in which we are all born?
84. Is original sin, though not actually committed by us, nevertheless truly sin?
85. What fatal consequences have, with original sin, passed to all men?
86. Did the fatal consequences of sin fall upon man only?
87. What would have become of man, if God had not shown him mercy?
88. Why could no one have any more received grace ?
89. How did God show mercy to man?
90. If without the grace of the Redeemer no one can be saved, how then could those who Lived before the coming of Christ go to Heaven?
91. Did God give grace also to the pagans for the salvation of their souls?
92. Did the Redeemer come immediately after the fall of our first parents? 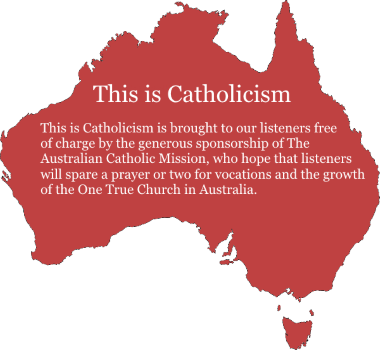 This is Catholicism℗ is a Production of the Restoration Radio Network. Copyright 2015. All Rights are Reserved.