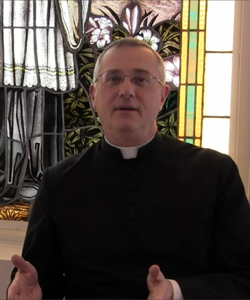 Ten years ago the questions behind the "Pius XII changes" to Holy Week (as they are so often called) seemed consigned to academia and the geeky liturgical fringe. However, as time has gone on, and as even many Motu groups have begun to take a serious and honest look at these changes, two questions have appeared:

1. Firstly, what were the changes to Holy Week?
2. What should Catholics do in light of both the Pius XII legislation and the current situation?

Guest Father Anthony Cekada has researched this topic extensively and begins with the second question first, the legal question: if some Catholics consider Pius XII as the "last true pope" shouldn’t those Catholics obey his legislation? After examining that Father walks through Holy Week from Palm Sunday to Easter Vigil, explaining briefly the massive destruction wreaked on some of the most ancient ceremonies in the Roman Rite in the name of "Restoration" which we know the Novus Ordo sect uses in its most Orwellian sense.

Many attendees of a 1958 or 1962 Mass don't realize that during one of the most special seasons of the year they are unwittingly participating in the Novus Ordo, for the liturgies that those attendees frequent during Holy Week are identical to those used in that sect.

Host Stephen Heiner joins Father Anthony Cekada for this look at a topic that's very timely, given that Holy Week has just passed.

Articles referenced in the show may be found below: