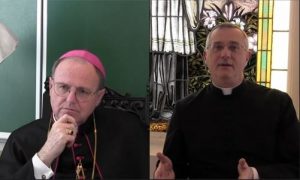 In this first episode of Francis Watch for Season 5, we work through more of Bergoglio’s master program for the Novus Ordo Sect.

We discuss: the video that was released around Epiphany in which religious indifferentism is fostered, the resurgence of the Bologna School of interpreting Vatican II, the idea of God as father and mother, the climate change light show that played on the facade of St. Peter’s basilica, the delayed release of the post-synodal exhortation and cautions from Burke about it, the reception of “communion” in St. Peter’s Basilica by Finnish Lutherans, planned celebration activities in Sweden for the 500th anniversary of the so-called Reformation, the use of the Untener Prayer, and more.

To gain unlimited access to all Restoration Radio shows, you can subscribe by clicking the link below.

Francis Watch℗ is a Production of Member Supported Restoration Radio. Copyright 2016. All Rights are Reserved.