Season 6, This is Catholicism, Episode 14: The Holy Catholic Church 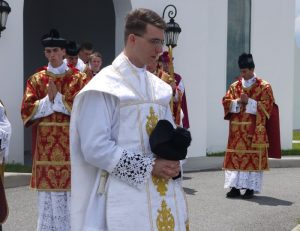 This is Catholicism continues with the first part of the ninth article, "The Holy Catholic Church." Father Philip Eldracher explains the actions of the Apostles after Pentecost and the structure and unity of the Catholic Church.

Father Eldracher is currently pastor of Mary Help of Christians chapel and provides the Traditional (Tridentine) Latin Mass to faithful Catholics throughout Australia.

The Ninth Article.
'The Holy Catholic Church; the Communion of Saints'
1. On the Church and the Form of her Government.

To gain unlimited access to all Restoration Radio shows, you can subscribe by clicking the link below.

This is Catholicism℗ is a Production of Member Supported Restoration Radio. Copyright 2017. All Rights are Reserved.