The Dogma of Hell and How to Avoid Hell – Book Review 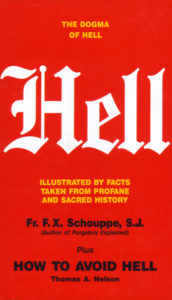 This book is really two books in one - The Dogma of Hell Illustrated by Facts Taken from Profane and Sacred History (they liked long titles in those days) by Father F.X. Schouppe (1883) and How to Avoid Hell by Thomas A. Nelson a little over 100 years later.

It goes without saying that such a work is counter-cultural. In recent times - especially after Vatican II - there has been a real effort in our culture to downplay the realities of hell and the legion of putrid Satan-led devils seeking to drag billions of souls into the abyss. Indeed the secular idea of hell today has been reduced to little more than a cartoonish skit - a menacing-looking red Halloween costumed Lucifer with a long sharp tail waving a pitchfork around. In a world which has never seen such co-ordinated evil since the days of the Old Testament Flood - infanticide, LGBT pride, unjust wars, contraception and corruption of our youth - hell is a place which dare not speak its name. Most churches don't like to talk about it. Ninety percent of Novus Ordo funerals include an address by the pastor assuming that the recently departed is “looking down at us from heaven” yet this is statistically improbable. Why? Because God said in the Gospel according to Saint Matthew 7:13 “enter in through the narrow gate for wide the gate and broad the way that leads to destruction and many there are go in thereat”. We also know that man tends towards evil (concupiscence), a scenario played out with monotonous regularity through the Old Testament where God grants His people extraordinary favours and monumental victories only to have these favours returned with ingratitude and idolatry.

The 1883 book begins “The dogma of Hell is the most terrible truth of our faith. There IS a Hell. We are as sure of it as of the existence of God, the existence of the sun. Nothing, in fact, is more clearly revealed than the dogma of Hell, and Jesus Christ proclaims it as many as fifteen times in the Gospel. Reason comes to the support of Revelation; the existence of a Hell is in harmony with the immutable notions of justice engraved in the human heart…”. This stark and sobering passage sets the tone for the rest of the book.

Many books are read and then soon forgotten but I can tell you that some parts of this powerful book stay with me even today - 15 years after having first read the book. Admittedly, much of this material is private revelation which we are not commanded to believe but it would stand to reason that a merciful God would want to warn His people about hell by extraordinary means (we remember in one of the most famous and most credible apparitions in recent times, Our Lady of Fatima permitted the children to see a vision of hell - what they saw truly horrified them). God does not want us to perish in the fires of hell but we must change our lives; hear His holy words and turn from evil. If the damned souls were capable of love, they would be pleading with us with tears in their eyes to avoid sin.

The first part “The Dogma of Hell” establishes the theological basis for the doctrine of hell and answers common objections such as “I don't believe in hell” with the obvious retort that a thing does not cease to exist just because you believe it doesn't. Criminals might also want to believe that prison does not exist but they are going to get a shock when they end up there! I say this is an obvious retort but if the author saw fit to address this truth in 1883, this is made even more necessary in our current age of rampant relativism. It is fashionable to invoke God's mercy to the complete exclusion of His divine justice. If you ignore Our Lord throughout your life, He will ignore you for all eternity.

Probably the most confronting chapter is III - Apparitions of the Damned. We read the story of a 16-year-old boy who had a reputation in his town for being very holy, who out of pride and shame concealed a mortal sin in Confession. In this state of mortal sin he kept receiving Communion putting off reconciling with God for months on end. Eventually he could not bear the remorse any longer and reasoned that entering a monastery would give him plenty of opportunity to go to Confession. Upon entry he was welcomed as a holy man by his superiors. Not wanting to reveal his shame he deferred his Confession to a later period. Months became years until he became afflicted with sickness. This was great, he thought - he would make a General Confession before he died but by the time that opportunity came, he obscured his sins so much that his confessor was unable to understand them. He hoped to come back the next day to make this right but by that time the unfortunate man had died. This is only one of many such stories in this powerful book.

The second section by Thomas A. Nelson more explicitly enumerates the various mortal sins that will send a sinner to hell. With reference to the Seven Deadly Sins, the Spiritual and Corporal Works of Mercy and the Ten Commandments, Nelson spells out the common sins with which mankind is afflicted. Being written in the 1980s he includes some more “modern” sins such as pornography and birth control. I have no doubt that had he written this book in 2019 he would have also addressed transgenderism, infanticide and pedophilia.

Reader “Kathy” in an Amazon review stated “It got me to go back to confession and make a good confession and to go to confession often. I thought it was very informative in explaining the sins that fall under the commandments. The book makes you realise that Hell is very real and not a place you want to be. It has increased my Catholic faith and woken me up from the lukewarm place I was in in my life”.

If this book only saves one soul then it has done its job!