The Imitation of Mary – Book Review 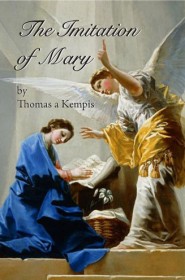 The Imitation of Mary

The temptation presents itself to merely reproduce the majority of this book's content here in order that I may encourage you to read it, as I firmly believe this work requires no sales pitch, but rather emphatically speaks for itself. However, I will instead do my best to set forth an overview, and a reasonable explanation for investing your time and attention in not just The Imitation of Mary, but more importantly in imitating Mary.

Let's begin with an excerpt from Chapter VIII; On the Beauty and Lineage of Mary.

engendered from the fruitful race of patriarchs,

nourished by the holy descendants of priests,

O Mary, honoured with the dignity of pontiffs,

announced by the choir of prophets,

heiress to the grandeur of kings,

illustrious daughter of the house of David,

supreme glory of the tribe of Juda.

Sacred heroine of the valiant people of Israel,

living symbol of a holy nation,

you merit glory and praise,

you merit tenderness and love.

You are a treasure among all women,

You, who even before the beginning of time had been chosen as the Mother of God.

the wise prophets announced you,

the just men and the kings bore witness to you,

the people of Israel sighed for you,

until the day when at last you appeared,

O Mary, for the salvation of this dying world.

Your name is proclaimed in the whole universe,

O Mary! from the rising to the setting of the sun,

Among all nations, Jews and Gentiles,

Greeks and Latins, Romans and Scythians,

Everywhere your name is announced with the Gospel.

Everywhere, too, and everyday your name is preached in churches and chapels,

in cloisters, in fields, in deserts.

It is repeated by the little and the great,

by priests and doctors and preachers,

who all equally seek to praise you.

Yes, O Mary, together the choir of the just unites its harmonies and its voices,

in order to chant your attractions,

your grace and your holiness.

that it can without ever tiring, chant, contemplate, meditate and fête your mysteries,

Mindful of the words of Wisdom:

Those who eat of me yet hunger for this bread,

those who drink of me still thirst for this wine.

With regard to spiritual reading, Thomas à Kempis is a household name among Catholics, and deservedly so; owing to that most treasured consequence of his penmanship, The Imitation of Christ. It is perhaps the focal point of devotional manuals published in the last six centuries, and has been referenced by many spiritual writers since.

You wouldn't be remiss, however, for pondering why in such a profound writing, there is little mention of the Blessed Virgin Mary; the Co-Redemptrix, the Queen of Heaven, and the Mediatrix of all her Divine Son's graces. We are taught that, as Christ our King became one of us through His immaculate mother, we too must go through her to reach Him. Be ye perfect, like your Heavenly Father is perfect. There is no created being in history more perfect than the mother of our Saviour (from the prayer in Chapter XXII; "There is not in heaven nor on earth a creature worthy to be compared to you"), and no creature more ablaze than her with a zeal for souls. If we are to model ourselves on Jesus Christ, we would be fools to disregard her who imitated him most perfectly; greater would our foolishness be if we neglected to call upon her to represent our cause before her Son.

Yet Thomas à Kempis did not neglect to touch on that most important topic of Mariology; he simply did not have the opportunity to publish his efforts during his lifetime.

From the Preface; Thomas à Kempis, canon of Cologne, and abbé of Mount St. Agnes whose church is dedicated to the Virgin, has written entire chapters on devotion to Mary in his divers works. But the copyists who transcribed the first books of The Imitation, finished by Kempis, thus leaving the fourth incomplete, did not know how to arrange the passages treating of the devotion to the Virgin Mary in the immense production of the author. Thus, the Imitation of Mary is the result of analysts, collecting and arranging from the breadth of his writings, a coherent and poignant work dedicated to the zealous objective of tracing the footsteps of our Heavenly Mother.

Each chapter is comprised of a short writing and a prayer, followed by a homily* and meditation; the latter two of which are composed by the analyst who undertook this work, Dr. Albin de Cigala, who comments on the extract of Kempis in order to aid the reader to derive more fully its fruits. The thirty chapters in total are divided among three categories; the Joyful Mysteries, the Sorrowful Mysteries, and the Glorious.

It is in his works that touch on the Queen of Heaven that one might see in Thomas à Kempis a sort of proto-Saint Louis de Montfort, as it were. If we are to imitate Mary, there are few works more precious than this book to introduce us to the concept in a manner that is at once both concise and profound.

The poetic language employed by the author is befitting of the sinless Virgin by whom such an indescribable deposit of culture has been inspired, and it is through this memorable prose that our eyes are opened to the truth of the Christian life: to follow Mary is to follow Christ. One would do well to employ both this work and True Devotion to Mary, in tandem, in order to imbue oneself with the necessary foundations of a strong devotion to the Mother of our Saviour, and it is because of this that I find the chapters being categorically divided between the mysteries of her life so fitting.

With only 112 pages in total, this work is certainly as invaluable as it is concise in setting forth the path that we must take to the Fatherland, and that path is through Mary the Immaculate.

You are all beautiful, O Mary: Tota pulchra es Maria.

*Example of a Prayer and Homily found within its pages:

Come then, O Mary, sweet Virgin whom I love!

Come then, my hope and my consolation!

Come, for when I am near you, when I hear your voice,

it seems that I already possess all good,

it seems that I am sheltered from all evil,

I come to seek refuge under your aegis,

O Mary, you who know how to give

to the weak, strength,

to the captive, freedom,

be for me all merciful,

be by your love a mother to me.

Thus I shall know through having experienced it how you console with charm,

and how you defend with assurance,

all those who are faithful in serving you.

(Soliloquy of the Soul, Chap. V)

Augustine is a young adult convert residing in Australia. He attends Fr. Philip Eldracher's "Mary Help of Christians" chapel and was baptised by Fr. Eldracher in 2019. He attributes the grace of his Baptism to the intercession of Our Lady; and is especially devoted to her Holy Rosary.