The Last Sunday after Pentecost 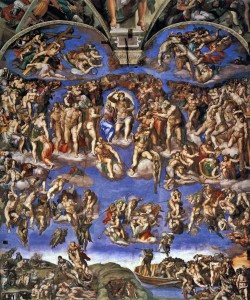 "This would be a great target to hit."  It was Tuesday, and I closed my eyes and pictured an explosion ripping through the Eurostar that was taking me from Paris to London.  Done at the right time, with the proper amount of explosives, such an act could destroy or severely cripple the Chunnel, kill hundreds of travelers of dozens of nationalities, and chill rail travel for months, if not years.  I opened my eyes again, and gazed at the lovely French countryside.

I'm not morbid by nature, but wars, and rumors of wars, have been on my mind since November 13th.  One of my rental properties is across the street from one of the restaurants that was hit in Paris.  It remains closed, and has an unending group of people who gather and leave candles. I've taken over 30 guests through the years to another of the restaurants that was shot up.  Turkey is provoking Russia.  Russia is understandably not going to let things slide.  And for greater context, the Roman Catholic Church's liturgical year ended two weeks ago on the Last Sunday after Pentecost.  For those unfamiliar with the Gospel for that Sunday, it reads as follows:

"(At that time,) Jesus said to His disciples: "When you see the abomination of desolation, which was spoken of by Daniel the Prophet, standing in the holy place—let him who reads understand—then let those who are in Judea flee to the mountains; and let him who is on the housetop not go down to take anything from his house; and let him who is in the field not turn back to take his cloak. But woe to those who are with child, or have infants at the breast in those days! But pray that your flight may not be in the winter, or on the Sabbath. For then there will be great tribulation, such as has not been from the beginning of the world until now, nor will be. And unless those days had been shortened, no living creature would be saved. But for the sake of the elect those days will be shortened.

Then if anyone say to you, 'Behold, here is the Christ,' or, 'There He is,' do not believe it. For false christs and false prophets will arise, and will show great signs and wonders, so as to lead astray, if possible, even the elect. Behold, I have told it to you beforehand. If therefore they say to you, 'Behold, He is in the desert,' do not go forth: 'Behold, He is in the inner chambers,' do not believe it. For as the lightning comes forth from the east and shines even to the west, so also will the coming of the Son of Man be. Wherever the body is, there will the eagles be gathered together.

But immediately after the tribulation of those days, the sun will be darkened, and the moon will not give her light, and the stars will fall from heaven, and the powers of heaven will be shaken. And then will appear the sign of the Son of Man in heaven; and then will all the tribes of the earth mourn, and they will see the Son of Man coming upon the clouds of heaven with great power and majesty. And He will send forth His angels with a trumpet and a great sound, and they will gather His elect from the four winds, from one end of the heavens to the other. Now from the fig tree learn this parable. When its branch is now tender, and the leaves break forth, you know that summer is near. Even so, when you see all these things, know that it is near, even at the door. Amen I say to you, this generation will not pass away till all these things have been accomplished. Heaven and earth will pass away, but My words will not pass away."  (St. Matt. XXIV: xv-xxxv)

Christ is foretelling of the destruction that would (and did), in a short time, befall Jerusalem, but it is a type of what will come at the end of time.  And in a year that has brought so much darkness, we can't help but insert ourselves into Our Lord's narrative and wonder if we will flee to the mountains, for surely we are besieged on all sides by false Christs.

But here at True Restoration we don't engage in millenarianism, but in making the best of a dark age, and part of that is honestly examining what has brought us to this pass. The answer is as simple as it is old: We have forgotten Our Lord and have made our own golden calves to take His place.  Our answers and remedies fall short because they always fail to include Him.

I watched Marine Le Pen thunder away in the European Parliament last month, giving perhaps her best speech ever, but the Front National's religion is France, and since France has forgotten and banished God since 1789, the religion of the FN is, at best, a natural religion, which can easily be turned to darker purposes.

For those who don't buy into that old-time Nationalist religion, the new and trendy religion of climate change is currently having its Vatican II in Paris.  Decrees, documents, and much lamenting will be heard, and "climate deniers" will be branded for the crazies they are alleged to be.  "Science has spoken," we will be told.

And here, in London, as I write this, David Cameron is speaking of "moderate Muslims" who could be "real allies" in the fight against DAESH/ISIS/ISIL/American legacy of the Mujahideen.  He is also instructing us on the "real Islam" (insert "religion of peace" quote here) a subject on which he has no knowledge or authority, while trying to convince the Commons that this proposed foreign (mis)adventure will be nothing like Afghanistan, Iraq, or Libya.  In America, we have an old saying (though Dubya couldn't quite manage it), "Fool me once..."  Surely the British know this idiom too?  Or is it the sort of "bon sens paysan" that only country bumpkins know who don't let the media do their thinking for them?

London is very festive in December.  Streets everywhere are strung with lights, and everyone has smiles on their faces.  But if we push aside the commercials, enter into the purple of Advent, and think on the reason for the season, we will see, as those kings of old once did, the star over Bethlehem as our true hope, and consolation.

Dom Gueranger, in his masterpiece The Liturgical Year, gives us the coda that leads us into Advent:

"The Liturgy at this close of the year continually alludes to the end of the world.  The earth seems to be sinking away, down into some deep abyss; but it is only that it may shake off the wicked from its surface, and then it will come up blooming in light and love.  After the divine realities of the year of grace, we ought to be capable of feeling a thrill of admiration at the mysterious, yet, at the same time, the strong and sweet ways of eternal wisdom."

So yes, the times may be troubling.  But be not troubled.

This article originally appeared at the Fleming Foundation.