The Rhine Flows Into the Tiber – Book Review 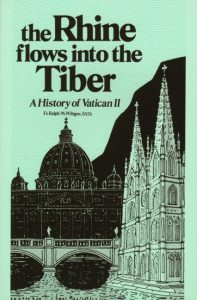 The Rhine Flows Into the Tiber by Rev. Ralph M. Wiltgen is a unique book for a number of reasons.  One is the variety of audience types who will find value in this book and the various perspectives held by subjects in the book itself.  This is so because of the objective and factual writing style of the author.  He has a background in journalism and it shows: the journalism and scholarship of the book are excellent, he is able to avoid one of the biggest problems with historical writing by keeping any and all motives unapparent, and the personal views of the author, though obvious, are generally left unexpressed and do not affect the quality of the writing.

The purpose of the book, as stated by the author and found in the cleverly-designed title, is to create a true account of Second Vatican Council, while capitalizing on the fact that throughout the Council the Germanic element of the Catholic hierarchy at the time was able to dominate the Council's fruits and proceedings, effectively dethroning the historical importance of the Italian element and gaining the power to pour their own ideas and motives into Rome.  Thus, the Rhine flows into the Tiber.

That is the official purpose of the book, but such a concept might appeal only to a niche audience who are interested in the "inside baseball" of an ecumenical council of years past.  The newer title of the book does a better job of generalizing the appeal for all possible audiences, The Inside Story of Vatican II. But this book could just as effectively be titled, The True Story of Vatican II; and what a story it is!

The value to be found in this book for Traditional Catholics is the true story of Vatican II.  One would expect such a story to be written perhaps by a revisionist, someone prominent in the Traditional Catholic world, but no.  And this does nothing but increase the value of the book.  To understand the truth of an opposing belief, you read books written by the opposition, for the opposition.  To truly understand Communism, you read The Communist Manifesto by Karl Marx, to understand the history of Protestantism, you read The History of the Protestant Reformation in England and Ireland by William Cobbett.  The Communist Manifesto was written as the central belief system of the Communist movement, and is not intended to be sly nor deceptive, so the objectivity can be trusted.  The History of the Protestant Reformation, was written by a Protestant as an account shedding light on the disastrous effects of this event in History and is hailed by true Catholics the world over, and so the objectivity can be trusted.  And so also with this book on Vatican II; it was written by one who supported the changes, who made no attempt to hide the happenings, nor deceive anyone of the truth, for in his eyes the truth is nothing to hide, and is something to be proud of, therefore the objectivity can be trusted.

At our time, half a century after the Council, the actual story must be reviewed in the Traditional Catholic perspective, for that is the one which is most important, and this is perhaps the most painful perspective to use.  Now that it has been established that this account can be trusted, what a terrible account it is!  It is often easy to look back at the Second Vatican Council and simply assume that it was a quick and easy transition from Tradition to Modernism.  At one point the hierarchy was in truth, and in the next moment in error.  But this is not the case, and in fact the truth is in some ways far more heartrending.  This story sheds light on the conflict and the struggle, between the liberal and modernist element and those few who still held onto Tradition, who still fought to preserve what they knew as Catholicism.  The resistance of the conservatives is shown as determined, but in the end futile.

It is a story of conspiracy, of underhanded dealings, of circumstances all too convenient and of manipulation.  The story can be started with little to no previous understanding of the Council, and as you progress, every chapter, every page, and every line serves as a simple piece of the overall puzzle.  The effects of the Council will make more and more sense, you are able to watch the Catholic Church of the ages transform (seemingly) into what it appears to be today, and the nature of the Novus Ordo becomes more and more apparent.

It will no doubt be a different experience for every individual who reads it, based on their previous understanding and beliefs, even just as it comes to the people present, and effective at the Council, the multitude of names, some all too familiar, many complete strangers, but often no less infamous. And this is perhaps the greatest value of this book, the fact that it leaves the door open to more research.  It is a good starting point on the journey to understanding the current situation, because the questions it leads one to ask are more numerous than the questions it answers.

Although as stated above, it is easy to assume that the Second Vatican Council was a previously-determined deal, signed away by the nameless and faceless modernists never to be heard of again, as you read the story, the human element is restored and as names are accompanied by titles the extent of the corruption in the hierarchy becomes apparent.  The appalling words, concepts and ideas which are expressed are magnified by the titles of the people from which they came, from priest, to bishop, to archbishop, to cardinal, and even to “pope.”  And this again makes the nature of the book, all too clear.

Some might believe that the story of Vatican II is the story of Modernism, but this could not be farther from the truth.  The story of Vatican II is simply a window into a single event of the story of Modernism, perhaps that event is the climax of the story, but still a single event nonetheless.  As the saying goes, “the more you know, the more you know what you don't know,” so also the more you read this book, the more you realize that the story of Modernism started long before, and shall continue for a long time after.  The ease with which so many Catholics hailed as theologians and great minds could spew heresy and error, the division and disunity of the hierarchy, these are symptoms of a disease which was contracted a long time before.  This and the extreme confusion seemed a plague which culminated in that event and was spread throughout the world is something comparable only to the subjectivism of the expansive Protestant world.  And indeed, one of the strongest themes of the Council is the toleration and pandering to Protestantism and it's beliefs.  There is a legitimate practice of evangelization, to present the truth in a way which will most easily be accepted and understood, which is tempered by the rule that you cannot compromise so much with the opposition as to become that which you are fighting against.  And this is the error of Vatican II, their excuse was to bring Protestants to the Catholic Church, instead they brought the “Catholic Church” to Protestantism.

And so the story ends, the pieces of the puzzle are all together, and looking back, possibly the worst side of the Vatican Council is around the resistance and those Traditionalists and Conservatives who stood against the onslaught of Modernism and tried to stand for the truth.  The unfortunate side of this aspect, is that though they opposed the changes, their stance was not what it should have been, there were ideas and changes made which were recognized as heretical, and which they made clear that they knew them to be heretical, but though they knew, once the changes were made, they did nothing.  Thus, this makes the book a story of weakness, the weakness of the few good men who could have made a difference or fell trying.

The most important thing to remember, is to look at this story in the Traditional Catholic perspective, that perspective which leads to the surprise that it happened so easily in comparison to how it should have been.  Looking at the true extent of the corruption and the rot within the hierarchy, and the fact that although an antipope was required to make it possible, John XXIII - Paul VI did not have to do much more other than get out of the way - the board had been set and readied, all they needed to do was move the first piece.  This makes it all too clear that had Modernism not culminated in Vatican II, it would have reared its ugly head at some later time and perhaps been far more disastrous.  Vatican II made the corruption and heresy obvious, the only ones spared from the confusion which followed were those who understood how it was the declaration to the world that the existing hierarchy and all within it were in error.  And when the author states that Vatican II was God's greatest gift to man in the 20th century, it is hard to disagree, for if Vatican II had not happened, this rot and this corruption could have spread and festered silently until even more members of the Catholic Church, through a slow process of change became something altogether new.  And who among us can claim that we would have been spared from this deception?  This story shows that Vatican II was the public victory of a previously-quiet conflict, which raged throughout the whole world and the greatest tool of which was how secret and unapparent it was.  Well now it is not secret and it is all too apparent, and now the faithful know clearly what the truth is.

The lessons to be learned from this book are many and very valuable.  One could say that it is similar to the old propaganda film series the U.S. used in World War II, Why we Fight.  This is the story of why we fight, and what we are fighting against as clearly outlined in a book written by the enemy.  Fighting against that heresy which is responsible for so much horror in the world today, fighting against the corruption and complacency which caused this heresy, and most of all, the weakness, the toleration and the compromise with error, that allowed the horror to take place and which still allows the horror to take place.

Finally, to be perfectly reminded of what the true Catholic perspective is, all one need do when reading the book is to replace the very last line of the story with the words, “Then the plague of Modernism was unleashed upon the world."