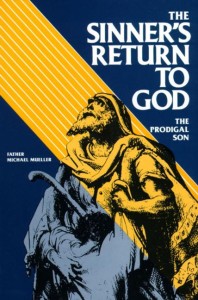 Let's face it, we all suspect it, whether we admit it or not, something big seems to be on the horizon — or at least we are keenly aware that nothing in this modern world of rapid change is secure and constant.  Though we don't know what lies ahead, we sense that it won't be a Teddy Bears' Picnic. Now I am one for planning and being prepared, yet how can one prepare for every contingency?  We can't — since we don't know exactly what the future holds.

Since it is impossible to prepare temporally-speaking, we should instead make great efforts to prepare spiritually because one thing about the future that we know is for certain, is that we will die and be judged by the Almighty Judge.  And whatever we might have to face along the way can only be effectively prepared for in the spiritual sense.  Consequently, we Catholics should jump on the “Prepper” bandwagon but do it right — in the only aspect that really counts – and that means get the affairs of our household (our souls) in order as best we can!

Last year, True Restoration reviewed and promoted the book Total Consecration to Mary.  Indeed, we know that devotion to the Blessed Virgin Mary is necessary, hence that is something we all must solidly establish.  More recently, True Restoration promoted, Prayer: The Key to Salvation because, as the title indicates, prayer is also vital and is the key to salvation.  Now, True Restoration wants to help all our Catholic readership with their “spiritual prepping” by encouraging you all to seriously crank up your programme, and thoroughly get your affairs in order whilst you still have time. Thus we bring to your attention: The Sinner's Return to God by Fr. Michael Muller.

“A good book is a faithful friend, that will give us counsel without cowardice or flattery, on the one hand, and without any personal bitterness, on the other. It is also one of the best missionaries of the Church. It can enter places where priests cannot penetrate.”

Then the author goes on with some accounts of how this introductory comment of his is proven true, followed by:

“A thousand such examples might be offered to show that the reading of pious books is well calculated to lead sinners to a life of grace, and to encourage the just to walk steadily onward on the road to perfection. The tendency of pious reading to induce men of the world to change their ways and enter on the path of a holy life, may be seen from the conversion of St. Augustine...But what was it that finally, after so fierce a struggle, overcame the heart of the saint?  What won that heroic soul to God? The final victory was due to the reading of a pious book.”

So far very encouraging — yes, we are feeling positive and are keen to read this book!

Then, true to form, and just what one would expect from a traditional Redemptorist Mission, Chapter One minces no words and veritably thunders against the wickedness of impurity.  It's very intense — and if you've ever thought that maybe sins of impurity aren't that bad because they are so common and it's understandable because humans are weak etc, then all such misconceptions will be quickly blasted to oblivion, never to return.  Account after account, graphic and horrifying are paraded before us, shocking and at once sickening.  Though we started off with an example of a  former slave to lust that had a happy ending, being St. Augustine, this chapter gives nothing but miserable endings, one relentlessly after the other.  There are no death-bed conversions and cold-hard-reality is laid bare before us.

When the author ends this chapter with, “All that has been said on this subject has been said, not that any one who has been addicted to the vice of impurity may be driven to despair, but that he may be cured,” we are grateful that he clarified that, because had he not, we would be excused had we thought otherwise.

In addition to the emphasis on the spiritual reprobation of the impure, there are detailed stories of the nasty effects such vice often causes to one's physical health.  It could be pretty disturbing if one is very squeamish.  What struck me after reading this, is how “sanitised” and “glamorised” the idolatry of lust has become in our era.  Apart from the occasional mention of AIDS (which was all over the news late last century yet we seldom hear much of it now), the modern mind does not associate sins of the flesh with disease nor escalated decay of the body.  It seems that that act of mercy which God gave in the past, when He chastised the body in this life to try and bring the soul to repentance, is no longer afforded the person wholly given over to lust in our times. Instead, we have antibiotics and other modern interventions that allow those addicted to impurity to continue on that path with no consequent, crippling, physical infirmity to shake them out of it.  And to add insult to injury, we have the world's advertisers of “obsession with lust” appearing as pictures of glowing health and vitality, of course using the tricks of their trade, including cosmetic surgery and airbrushing in addition to other medical interventions. What a con. What a great deceit. You know who is lying to us!

Next chapter, you guessed it, he launches an attack on “Drunkenness.”  Though a shorter chapter, it is equally graphic and Fr. Mueller unabashedly attacks the making of excuses attempting to justify drunkenness. He is matter-of-fact: It is a mortal sin.  He references Scripture, “The drunkard shall not possess the kingdom of God.”

In addition to expressing what we all know from simple observation, that being, someone who is drunk is foolish, disgusting, has reduced themselves to the level of the brute animal and is a disgrace for all to see — the author gives us the sobering warning (pardon the pun) which is something I had never thought of, viz. There is only one sin and one sinner alone that can tie God’s hands and oblige Him to refuse the exercise of His mercy. “That one sin is drunkenness; that one sinner is the drunkard.”  He goes on to explain that in every other case of mortal sin, whether habitual or the one-off commission, the sinner just before the moment of death can “send forth one cry for mercy, and in that cry be saved.” "The drunkard alone amongst all sinners lies there dying in his drunkenness. If all the priests and all the bishops in the Church of God were there, they could not give that man pardon or absolution of his sins, because he is incapable of it…The one sin that puts a man outside the pale of God’s mercy is drunkenness.”

Heed the charitable advice he then gives: “And you who are yet free from this accursed vice, thank God, and beware lest you be led to it in degrees. (Earlier he explained how one usually gets drawn into the habit of excess in drinking by subtle degrees). It is far easier for you to avoid falling into this vice than it is to abandon it after having once contracted it.”

Once again, I couldn’t help but think of how just like the sin of impurity, the modern-world not only makes light of this damnable vice, and excuses getting drunk with “it’s just harmless fun” or “loosen up, we’re just having a good time” — it actually has been established as a social institution and even “tradition.”  And just because there were bad Catholics in the past who were notoriously drunkards doesn’t make it a Catholic tradition either — rather, he exhorts all drunkards to “stop now…save yourself whilst you still have time…give up drink”  Then he praises the holy virtue of temperance also stating: “How glorious is the mission of the temperance society!”

The following chapter is on bad books.  Idle, useless books which do no good, but distract the mind from what is good, bad books, newspapers, magazines, journals, sensational magazines, medical works — and more — are all included in his “no no” list. The contemporary reader will be faced with the question of whether they should add TV, movies and internet material to this list, if they wish to treat of this subject honestly. In fact, according to his explanation of what must be avoided in order to avoid sin (whether it be sloth/wasting our precious time that should be spent in salutary pursuits etc), it would seem that hardly any TV-watching at all could be justified — but don’t take my word for it, have the courage to read it yourself and then make your own decision.

Even “harmless” fiction novels come with a big warning sign.  I found the detailed account of St. Jerome being ordered to be scourged for preferring to read Cicero over pious books, to be both fascinating and of great ponderance. I expect all readers of this book will be enthralled and perhaps a tad horrified by this part.

The good news is that this book, The Sinners Return to God is just the ticket and exactly what we should be reading if we want to save our soul!

These snippets from the first few chapters I hope will inspire you to want to read this wonderful book, which after a fiery start proceeds into very edifying and consoling topics including, for example, the necessity and integrity of confession and also general confession and contrition.

It wraps up with a very encouraging discourse on the power and the mercy of Our Lady.  We are reassured that when grief, sorrow or danger is upon us, she is our refuge.

“When a sense of utter loneliness oppresses us, when we seem abandoned by all the world, then is the time to remember that we have a Mother in heaven. The Blessed Virgin Mary has not forgotten us.”

Truly, given such heartfelt reminders, this book will be a companion and light to us in these troubled times.

Disclaimer
Father Muller, in another work, denied Baptism of Desire. To deny Baptism of Desire, however, is contrary to the teaching of the Council of Trent, Pope Pius IX, Pope Pius XII, as well as to the teaching of Saint Augustine, Saint Ambrose, Saint Thomas Aquinas, Saint Robert Bellarmine, all of them canonized Doctors of the Church, as well as to the teaching of all Catholic theologians, and to the common teaching of the Catholic Church as expressed in its catechisms. Nonetheless, there is no trace of this error in this work of Father Muller. Consequently I approve of this book, but at the same time I caution the reader against Father Muller’s error in another work. - Bishop Sanborn