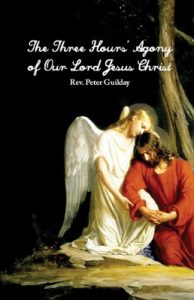 This book has been around for a while; it is the same vintage as the Our Lady of Fatima Apparitions, however it is a collection of sermons given earlier, at the church of Our Lady of Lourdes, New York, on Good Friday of 1916.

Although an excellent companion for Good Friday, itself, this series of instructions on the “Seven Last Words of Christ” whilst He was on the Cross, is also a wonderful resource for meditations throughout the entirety of Lent and all year round.  Being considerably more lengthy than the brief thoughts on these Seven Last Words presented by Monsignor Robert Hugh Benson in his “Paradoxes of Catholicism,” and being in written format instead of the audio sermons such as those available by Bishop Dolan and Father Roy Randolph on the same subject, this 71-page paperback proves to be a very useful resource for those quiet times of private meditation when an audio recording is unsuitable. The considerations presented will also augment your scope for meditating on the Fifth Sorrowful Mystery, being the Crucifixion and Death of Our Lord; which alone makes this book a worthwhile addition to any serious Catholic’s library.

After a Preface and the Contents list, is presented a rather long and truly-beautiful prayer On the Seven Words of Christ on the Cross, attributed to the Venerable Bede. Having never come across this prayer, I was really struck by the connections and ideas in it. Next comes the Introductory chapter, starting off with the Scriptural quote, “With these I was wounded in the house of them that loved me.” – Zacharias, XIII: 6, followed by a very thorough setting of the scene of the Crucifixion. We realise straight away that this series of talks is going to be both profound and deeply moving when we come across, in this opening chapter, such thoughts as, “From the four wounds as from the four rivers of Paradise, His blood began to flow over the world, purifying it and burning up all the evil which existed therein.” The paramount importance of the subject matter of the discourses to come is made known when Father Guilday states, “Every act of Jesus in these last three hours of His life is full of significance for the Christian heart." Then, “The seven words of the blessed dying Christ passed unheeded and misunderstood over the throng on Calvary; but there are hearts filled with faith, eyes filled with tears, and souls burdened with sorrow kneeling around a million Calvaries today. Christ Jesus looked in vain for one that would grieve together with Him and for one that would comfort Him, and found none.”

An entire chapter is dedicated, respectively, to each of these Seven Last Words. They all start with the Scriptural quote of each word, so we know what these “words” are - actually they are each a full sentence or sentences - and so we know where these “words” are recorded in the New Testament. Incorporated throughout each chapter are sentiments addressed to Our Lord, i.e. prayers, which are fitting and relevant to the material presented, so in that respect it is similar to many of Saint Alphonsus Liguori’s writings and “The School of Jesus Crucified.”

The First Word is “Father, forgive them, for they know not what they do.” – Saint Luke, XXIII: 34; this chapter is filled with sorrow-inciting thoughts, which surely, we all would relate to such as, “If He suffered more than seemed necessary, if He lingered full three hours in unspeakable agony, it was because we have so often knowingly and wilfully violated divine laws of His Eternal Father.” Additionally, there are many aspects which I have previously never come across that are mentioned in this book, such as, “Was it not enough that the angels in heaven, horror-stricken at His agony, should hurl themselves against the gates of Heaven, begging and pleading to be allowed to smite mankind with death and annihilation?”  Goodness!  Fortunately, that didn’t happen! The chapter ends with a prayer that starts off as follows, “Christ Jesus, it is hard to forgive. There is scarcely a soul here to-day gazing up to Thee, into whose heart the iron of bitterness has not entered. We have all passed through this crucible of suffering. Persecutions have followed us from our mother’s knee. We have been led into dangers by false friends; we have been wounded in hands that gave generously, wounded in feet that hurried to carry consolation; we have been bruised in hearts that sought comfort in the quicksands of friendship, and all around us have eddied and flowed fierce, harsh struggles in this probation-house we call Life. There have been lies, dear Jesus, calumnies, suspicions, wrongs and treacheries all through the years, and our hearts are hardening like stone. Victims we have been of evils innumerable, and our souls are stored with ugly remembrances of bitter things done and said, and it is hard to forgive, so hard to forget. But thy heroic example, Lord Jesus, hath renewed the face of our souls, like the purifying fires of a Pentecost. Thou hast taught us in this first word from the cross the Law of Pardon.”

The chapter on the Second Word, commemorating when Our Lord promised Paradise to the Good Thief, brings heartbreaking reminders such as, “For we too have been thieves, O God – thieves of a worse sort. Talents of grace and of nature Thou hast given to us, and like thieves we have stolen them for our own evil ends. They were given to us for our salvation; we have thrown them to the wind in the pursuit of the pleasures of the world. It is we who again and again have robbed Thee of Thy glory, by our pride and vanity. It is we who have bartered like thieves in the night the purity of truth for lies of the world. It is we who have cast aside the white garment of love Thou hast placed upon our shoulders in Holy Baptism, cast it aside for the wretched bribes of the lowest pleasures in life.”

The Third Word recalls to our minds the presence of Our Lady in this whole drama; similar to the 4th Station of the Cross. Reading this chapter brought back images of that scene with Our Lady and Saint John in “The Passion of the Christ” movie, depicting that meeting of Our Lord and His Blessed Mother – a scene throughout which I expect most Catholics struggle to keep a dry eye. We meet these two key figures again, in a similarly-moving circumstance, when Our Lord says, “Woman behold thy Son…Behold thy mother.”  Emotionally torturous as this chapter is, the next is even more distressing, when we delve into perhaps the most mysterious of all events of Our Lord’s life when He cries out, “My God, My God, Why hast Thou forsaken Me?” Once again, the appalling scene in that Passion of Christ movie, actually seems to do reasonable justice to putting into our minds a fitting setting of this frightful cry of dereliction - the ultimate desolation: "Eli, Eli, Lamma Sabachthani." The chapter of this book then builds amply on this graphic scene. It causes us to hark back to Psalm 68, “And I looked for one that would grieve together with me, but there was none: and for one that would comfort me, and I found none.” None; not even God, Himself, allowed comfort to God, Himself! Paradox of all paradoxes – how could we ever comprehend this? It also seems appropriate that it occurs as the central Word in this complete and perfect series of the Seven Last Words of Our Redeemer.

The section on the Fifth Word, “I Thirst” continues the poignant presentation. The prayer at the end of this part, especially, is so beautiful and contains such astoundingly-appropriate concepts, that one simply cannot read them as pious sentiments but is compelled to sincerely pray them.  Upon reaching the Sixth Word, “It is consummated” we can’t help but think, Deo gratias! What a relief!” after all that has just gone before.  And this unspeakable suffering didn’t just start with the First Word, but extends linearly back through the Agony in the Garden, right back to Our Lord’s first moment as the God-Man, when “the Word was made Flesh.”  Then the Seventh Word, “Father, into Thy hands I commend My spirit” turns this relief into a strange admixture of sorrow and, as it were, pre-emptive joy when we read, “Christ dies that we may live” and “Christ now rolls away the heavy stone which barred the way to Paradise, and crying out with a loud voice recreates in us a second life of union with God, and of heritage, under the new law, of heaven gained with all its joys….From henceforth the souls I have redeemed by my passion and death will look upon Thee as their Father, a Father who protects and defends, a Father who bestows upon them brotherhood with His divine Son and a co-heritage in the kingdom of heaven.”

The Closing Discourse expands, in a similarly soul-stirring manner as the rest of these inspiring sermons, on the quote, “We suffer with Him, that we may be also glorified with Him.” – Saint Paul to the Romans, VIII; 27.

This is a great little book! You will not regret reading it (or more so, studying, immersing yourself in, and praying along with it); your only likely regret will be that you didn’t discover it sooner.