Earlier this year, people who pay more attention to the policies of Big Tech than to the Liturgical Year raised the alarm: "Get off WhatsApp, and delete it, or they will be able to read everything!"  Even this information was outdated, as Whatsapp had been data-sharing for a long time prior to this alarm.  This came at the same time as a few (not many) people decided to "quit" Twitter and Facebook and to try their hand at a "free speech" platform, Parler, which was promptly crushed by said Big Tech.  I was reminded of those Americans who have a home armory and say the weapons contained inside are there in case the "guv'mint" (armed with Reaper drones, by the way) wants to try to cancel the Second Amendment.  Apart from the fact that we are not called to die for amendments to Masonic Constitutions, rather like the Apostles at the very moment of Our Lord's bodily departure from Earth, we just don't seem to get it.

Despite having lived through 12 months of what is quite obviously a managed event with multiple facets, people still seem to possess some idea that they can run away.  There's no country or locality where the New World Order cannot get you.  And if people think that "encrypted" emails and messaging services will save them, in a world in which the CIA's cloud services are hosted by Amazon, they really aren't paying attention.  Allegedly encrypted email and messaging services will not save us.  Not now, not ever.

In Acts 17 St. Paul gives a masterclass in how to preach the Gospel in the midst of the comings and goings of the world.  He was standing in the midst of the Areopagus, not far from the Parthenon, and was surrounded by people who were simply chatting about what was new.  In their midst he then proceeds to use their statuary and their literature to preach Our Blessed Lord to them.  In verse 23 he says, "For passing by, and seeing your idols, I found an altar also, on which was written: To the unknown God.  What therefore you worship, without knowing it, that I preach to you" and he continues in verse 28, "[S]ome also of your poets said: For we are also his offspring."

St. Paul went to where the people were and used their cultural idioms to speak to them.  Some may have ignored him and others may have continued with their gossip, but very likely some were converted that very day.  St. Paul was obeying Our Blessed Lord's command from St. Mark 16:15 to preach the Gospel to every creature.

What would the self-deplatformers have St. Paul do?  Start his own Areopagus and hope people show up. 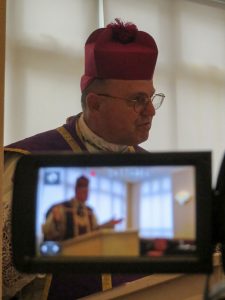 Free Speech is a Lie

Unfortunately, those who are fleeing the platforms of Big Tech have become fellow travelers with so-called "free speech advocates."  Those fleeing eschew the "context" of Youtube and the "fact-checking" of Facebook and the "shadow banning" of Twitter, but they don't notice the sandy foundation they hope to build their new online presences on: so-called "free speech."  Free speech is now, and always has been, condemned by the Church.  It is repugnant to even the natural law to put untruth on the same level as truth.  Christianity doesn't seek "free speech."  Not now, not ever.

Christianity has been in the lion's dens, in the arenas, on the torture racks, on the chopping blocks, and on crosses.  Did the Confessors and Martyrs and Virgins clamor for their "right to free speech"?  No, they imitated Our Lord, who opened not His mouth when condemned at the most unfair trial in the history of the world.  When they were compelled to speak, they professed the Truth, often in simple words.  Beyond that they didn't insist on any "rights" to "free speech."

We are called to stand in the Areopagus of today, on the Internet, where the people are.  Twitter alone has almost 200 million daily active users, which is nothing compared to the 2.3 billion users of Youtube and the 2.8 billion users of Facebook.  The opportunity to share our faith with others is unprecedented in the history of the world.  With the self-deplatformers silent, it is on those of us who remain to go ad gentes.  We don't expect them to come to us, at a time and platform of our choosing.  And we have no illusions that we can escape the evil that is descending in greater force upon us than previous generations have seen by running away.  Self-deplatforming is a delusional self-set trap.

Instead of "keeping up" on the latest moves of Big Tech, thinking ourselves smart enough to outwit these dark forces, perhaps we can make an Easter resolution to sanctify ourselves with prayer, and unabashedly be our true Christian selves online, so that we may be "ready always to satisfy every one that asketh you a reason of that hope which is in you." (1 Pet 3:15)

Photo taken in 2015 in London, at the Tavistock Hotel, in the early days of the RCI London Mission.