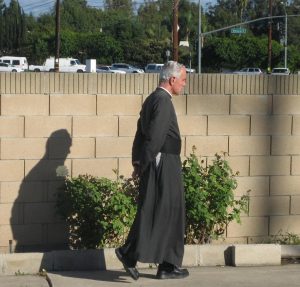 This piece was subsequently published in the March 2009 issue of The Four Marks. Please visit their home site: www.thefourmarks.com.

As a big fan of Bishop Williamson, I have thought it prudent to stay quiet about the excommunications, the gotcha journalism of the Swedish television reporter waiting three months to air an interview, and the ensuing apology that Bishop Williamson gave for causing a media ruckus. When all the world is howling, the last thing you want is to give them more to howl about.

However, the Vatican communique on Wednesday of this week really was the last straw for me. Now, for the first time since the Vatican prior to 1960, someone from the clergy is being told he won't be considered Catholic unless he recants something – but, get this – that something is how that clergyman thinks regarding a historical topic.

I was so stunned when I first heard this. The first place I looked was the rite of Baptism - the rite that all of us - young or old - had to pass through to become a Catholic. The rite reads:

We ask of the Church of God faith. No more, no less.

So, there is a litmus test for being integrated into Catholicism now - but it isn't the Oath against Modernism, or the repudiation of heresy by a Protestant. Nope, it's the recognition of some abstract understanding - notice the note from the Secretary of State is purposely vague - of a historical event. We all know Jews were killed in World War II. So were a lot of gypsies, and Poles, and Catholics, and priests. The whole world suffered. That is a fact, and not a matter of opinion. But in the rise and fall of history, where things get discovered and refuted as centuries go on and more history comes to light, isn’t it foolish to believe that 50 years after an event, we know absolutely everything about it? I certainly have not investigated the Holocaust thoroughly. It is certain that Jews were killed - how they were killed, I'm not sure - because I'm not willing to pronounce definitively on events in history I haven't studied well. The point here isn't whether Jews were killed - Bishop Williamson admitted that in the interview - he said that Jews died in concentration camps. The point is that recognizing "how many" Jews were killed and "how" is hardly a matter of the Catholic Faith. How can any reasonable person argue thus? By the way, no one is arguing that it isn’t lamentable that Jews were killed for being Jews. It was a sad, terrible travesty. Let no one think this is about celebrating Jewish death.

However, what use is speaking of the Shoah and invoking "never forget" if all that matters is Jewish blood? There is a scene in Steven Spielberg's Munich that reminds me precisely of this. A character says in response to the death of an innocent bystander: "the only blood that matters to me is Jewish blood." If the Jews want us to "never forget" then don't let us forget about those who are innocent who are being slaughtered. Start by immediately ceasing Israel’s killing of Palestinian civilians under the guise of "collateral damage."

Those of us who have read history find enormous cognitive dissonance in the modern state of Israel. One may recall one of the powerful scenes from Schindler's List where Jews are being evicted from their homes and their belongings are being flung off balconies and out of windows. Jews should know what it's like to lose their homes and lose their loved ones. Yet, we see not one ounce of this recollection in the current manifestation of Israel's militancy against the Palestinians – murdering them in the streets and bulldozing their homes.

Joan of Arc died excommunicated and she was later declared a saint. This is singular proof and precedent that excommunications can be in error. They are certainly not doctrinal pronouncements. The fact that the four bishops had their excommunications lifted, while nothing was said about the two consecrating bishops, is at best disingenuous and at worst an offense against justice. Was the Archbishop acting according to his conscience or not? Dare the Vatican of Assisi recognize this? The question of a “papal mandate” was never in question for Bishop de Castro Mayer, who told anyone who would hear him on June 30, 1988, that “we have no pope.”

I have always been troubled by the formula proposed by Ratzinger to Archbishop Lefebvre: "Vatican II in the light of tradition." Here is the actual text from the May 1988 Protocol: "Regarding certain points taught by Vatican Council II or concerning later reforms of the liturgy and law, and which do not appear to us easily reconcilable with Tradition, we pledge that we will have a positive attitude of study and communication with the Apostolic See, avoiding all polemics" (Laisney 73).

But here's the reality, and part of why the Archbishop "unsigned" or "withdrew his signature" from this document:

Vatican II in the light of Tradition? This is not possible.

We cannot view Vatican II in the light of tradition because Vatican II has nothing to do with Tradition. It has to do with Innovation. Innovation that at times directly contradicts previous papal teaching. How does the spirit and 40-years of proof and praxis of Sacrosanctum Concilium square with Pius XII's famous and forgotten Mediator Dei, in which the idea of archaism is repudiated: "Just as obviously unwise and mistaken is the zeal of one who in matters liturgical, would go back to the rites and usage of antiquity, discarding the new patterns introduced by disposition of Divine Providence to meet the changes of circumstance and situation" (Pacelli 29). This is but one small example, but when a Novus Ordo document is compared to a papal encyclical, both ostensibly magisterial documents, and they are in opposition, what wins? The very fact that a Catholic has to ask such a question is an indication that things are gravely wrong.

Those of us who have studied this know that Vatican II cannot be simply swept under the rug and forgotten about. It happened. Fact. It issued teachings that contradicted previous Papal teachings and praxis. Fact. “What is truth” is no longer a question that Pilate asks alone – those of us who are not content with the simplistic often-used Traditionalist nostrum “it was just a pastoral council” must answer this question: How should a Catholic view Vatican II? The Vatican, which seems to take its cues from people like Angela Merkel these days, says that what is necessary is "the full acknowledgment of the Second Vatican Council."

Vatican II is the Trent of this generation and has been enforced ruthlessly, as perhaps Trent was. But Trent’s goals were to vivify the Faith and make it more relevant in the face of worldwide heresy. Vatican II’s goals were precisely to water down the Faith and make it less relevant – to devolve to a false Church where Scott Hahn would seek membership, and be told by a "Catholic priest" that he didn’t need to convert.

It is not my goal here, nor am I as competent as others, to offer a full-throated repudiation of Vatican II, but I often think of what another Society bishop answered me when I asked what we were supposed to do with Vatican II:

Bishop Tissier de Mallerais: I will say, one day the Church should erase this Council. She will not speak of it anymore. She must forget it. The Church will be wise if she forgets this council.

Stephen Heiner: Let me read it back to you from my notes. The Church must erase this Council, not speak of it, forget it.

It seems to me that we are back to June 29, 1988, the day before the consecration of bishops. The Vatican doesn't see any way back to what was always done prior to the Council. Indeed, as the many "encyclicals" of JPII illustrate, there weren't really any councils or encyclicals before Vatican II, as he never quoted teachings from anything prior to it. Traditionalists, and one would hope, the SSPX, don't see any way forward with the way things have been. We have watched the destruction over the past 40 years and refuse to go along "with the program." We refuse Modernism, and all its works, and all its pomps.

We seek what any postulant does in the ancient rite of Baptism I quoted from above: "faith." If we cannot have that inside the "official" structures of the "Church" we will do what we have continued to - all of us, since we discovered the true Catholic Mass - cling to our religion. And our guns – literal and figurative – if we have them.

And we won't be lectured to by non-Christians on what it takes to be a Catholic. Now or ever. Indeed, we know that the true Holocaust was offered by Jesus Christ to His Father on the day He died for our sins. Let us “never forget” that or allow that to be denied.

Photo was taken in 2006 in Tustin, California. His Excellency and I were working on the final draft of his first book. He was just starting to adjust to my taking lots of photos, so this is a hidden candid of him saying the rosary, amidst the bustle of Southern California.

Stephen lives in Paris, France. He founded True Restoration in 2006.