Tradition and the Church – Book Review 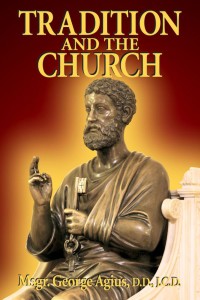 This book tears apart the Novus Ordo by going back to basics.

Even though it is more directed at refuting Protestantism, given the time of the author, as Fr Michael Oswalt points out numerous times in his commentary of the book, so many truths are direct condemnations of the Novus Ordo.

However, with all the fancy arguments citing authorities to prove a point, they focus too much on the technicalities (and their misinterpretations and false assumptions) and fail to go back to the roots of the Catholic Faith.

Tradition and the Church fills in the void. Looking at the roots of our Faith, Scripture and Tradition, we can easily see the Novus Ordo church, because it contradicts traditional Catholic doctrines, is a false religion.

When I see people arguing their positions: whether Bergoglio is a true Pope, whether we must obey him, whether the things he says is affected by Papal infallibility etc, it reminds me of a case we had to study in University.

In this case, a group of people pushed a man off a cliff, who subsequently died. However, the forensics report revealed the man did not die immediately from the impact, even though it broke his bones, but that the man died from being weathered, days later, by the environmental conditions.

The lawyer for the perpetrators argued that they should not be guilty for murder as the victim did not die as a result of being pushed off a cliff, but by the environmental conditions.

Knowing the elements to establish legal murder, this argument may have some technical soundness. Though, the judge, applying basic knowledge of murder and common sense, without hesitation, rejected the defence and held them guilty.

As those who justify their erroneous positions with ecclesiastical legal technicalities that lack basic application of the root truths of our Faith and ignore common sense, Tradition and the Church is an excellent source to learn the basics and origins of our Faith.

Leave your favorite argumentative sources alone for a moment. Read Tradition and the Church. Discover the earliest foundations of our Faith. Understand, even more deeply, why the Sedevacantist position is the only Catholic position to hold in the current climate until there is a true Pope.

Matthew is one of the Executive Producers of True Restoration Radio & Media. He lives in Melbourne, Australia and thinks he's the best thing since sliced bread. In reality, he's just okay.