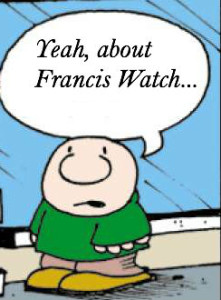 Just one of those days...

Just an update on what happened last night...

For those of you wondering why Francis Watch 3 cuts out at 2 hours and where the remainder of show is, the answer is that it vanished into cyberspace. Last night was standard operating procedure for all shows I've done that have gone over two hours: the kind female British voice giving me the countdown in my ear piece telling me when the live stream would cut off. The normal pop up on the screen which gives me the options to archive the show and end the recording stream or to keep recording the show. I pressed "keep recording" as per usual and my "ON AIR" light switched to "REC." - indicating that the show was being recorded by BlogTalk Radio's internal server and the live stream had ended.

I finished the up the show with Bishop Sanborn & Father Cekada, which went over by about 20 minutes and proceeded afterwards to do my usual post-show production stuff where I download the audio file, add the mp3 tags to the file itself, clean up the audio to sound as good as possible for our listeners who will download after the show. This is when the problems began. Read on.

Normally it takes between five to fifteen minutes after the show ends for BlogTalk Radio to allow me to download the show file. Last night, the file popped up immediately for download and I found that very odd. When I opened the file up to edit, I clearly saw the audio cut at exactly 2 hours, when the live stream ended. I called BlogTalk's technical support, who gave me the very nebulous explanation that "you are only guaranteed two hours of recording time and if our servers are too busy, then we do not allocate the resources to record after your live stream cuts." What??? In 120+ shows in Restoration Radio history, this has not happened one single time and now this is a problem? BlogTalk Radio's servers are too busy? Well color me American, but that is just "amateur hour" as far as I'm concerned. I left the phone conversation with their tech support very unsatisfied, but with the understanding that the last 20 minutes of my show are gone and there's nothing I can do about it.

So I offer my sincerest apologies to our listeners and I would love to promise that this will never happen again, but apparently I cannot make that promise.

Here's the  summary of the last 20 minutes:

We took a phone call from a caller in Wisconsin who asked Bishop Sanborn for some help answering objections to two friends who abandoned the sedevacantist position and returned to the Novus Ordo because they viewed sedevacantism and traditional Catholicism in general as a position of despair. Bishop Sanborn knocked it out of the park, in his usual fashion. We referred the gentleman to Bishop Sanborn's London Conference, now available for free.

We covered Francis tells his new "cardinals" that they must avoid ANY discrimination (apparently this does rule does not apply to the Franciscans of the Immaculate) and must work for to bring "peace" to those suffering from war, violence, and exclusion. Again with the exclusion buzzword.

We covered the latest Pew Poll which confirmed exactly what Bishop Sanborn has been saying over and over again with regards to the loss of faith. According to the Pew Poll, 77% of those in the Novus Ordo who were polled support contraception and 68% believe that Francis is a major change for the better in the Novus Ordo church. Father Cekada chimed in that Francis may be popular, but he is not yet as popular as birth control, so he has some work to do.

We covered the upcoming JPII canonization scheduled for 4/27/14 and the news media picking up on the rule breaking that the Novus Ordo sect has done, particularly with John XXIII. We also confirmed that we will have a special True Restoration Flagship show with Bishop Sanborn and Father Cekada on the "big day" of JPII & John XXIII's "canonizations."

We talked about the Catholic Culture story of Francis actually talking about sin. But before the conservative Novus Ordo types start breathing a sigh of relief, it isn't Francis condemning the sin of abortion or contraception, but condemning the "big sin" of the day of the news media telling lies. The lying news media? Wow. There's a shocker.

Finally, Bishop Sanborn plugged the new website for Most Holy Trinity Seminary and explained that since this is Lent, there's a wealth of material on the website for you to enrich your Lenten penances and feel even more awful than you already do about yourself :o). He referenced a new conference just posted on there that is an hour and thirty five minutes long on the subject of Hell. So, as he said, if you're looking to get more penitential and somber, let Bishop Sanborn be the one to help you. :o)

Father Cekada plugged St. Gertrude the Great and SGG Resources and the things they have up there. SGG Resources is a wealth of material, and Father also explained that the Church has a new webcam up for the Sunday Masses and the children's 11:20am Friday mass. Be sure to check it out.

Progamming Note: As of right now, we do not have an exact date for the next Francis Watch show because if we kept our normal schedule, it would fall on Maundy Thursday, and I can assure you that we will not broadcasting a show live on that day. Stay tuned and we will let you know when it is going to be as soon as we all figure our schedules out.