Why the Cross? – Book Review

“For if by one man’s offence death reigned through one, much more they who receive abundance of grace, and of the gift, and of justice, shall reign in life through one, Jesus Christ. Therefore by the offence of one, unto all men to condemnation, so also by the justice of one, unto all men to justification of life." – ROM. V. 17-18. So opens this pivotal treatise by the renowned 20th-century spiritual writer, who understood so well the plagues of our times – and so clearly presented the ancient, yet timeless, truths of our Faith to help combat the ills of the modern world.

This is a terrific book!  One of the best available by Fr. Leen! The first time I read it, it took me about a year, not because it was so boring but because each page was loaded with so much meat for consideration, that I couldn't move on until I had maximised the content. The second time I read it I got through it much faster because I wasn't using it as a meditation aid. Even after that year of slowly soaking it in, I was surprised to find on the rerun pass, that I picked up many new things that I either missed or forgot in the interim of those years.  So this book is one that will provide for long years of service as a spiritual booster.

Not just during Lent but all year round, this mystery surrounds us, it is inescapable, it is tremendous, it is at the core of everything we do on a daily basis but how elusive it is; and how poorly we grasp even the most vague understanding of it! How important and profoundly beneficial it would be to deepen our awareness of the answer to that pervasive question: Why the Cross? Father Leen, knowing our need, provides a compelling explanation that will change your life (unless you’ve already thoroughly comprehended the meaning of the Cross). 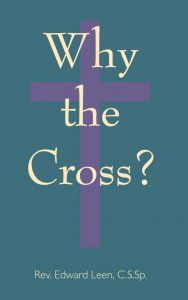 “The Christian is not free to leave aside the difficult injunctions of the Law and confine his efforts to those he finds easier to fulfill. There is no one exempt from the observance of the two commandments which synthesise all the prescriptions of the Christian moral code… St. Luke notes that the Saviour, in positing the necessity of the constant and rude sacrifices which this adherence to the law of Christian righteousness involves, addresses Himself to all. ‘And He said to all: If any man will come after Me, let him deny himself and take up his cross daily and follow Me.’”

“Christ’s theory of life is one. If a single element of it be subtracted the whole crumbles to pieces.”

“Many Christians take a purely self-interested view of religion, making of it a mere machinery for the getting rid of sins.”

“The world plunges from one crisis to another…But it will persist in looking for a Messias formed to its own notions. When the Redeemer comes and warns men that the real cause of the evils with which they are afflicted is found in the evil dispositions of their hearts; when He tells them, in consequence, that before they can hope for a change for the better in outward circumstances, they must first set up a change in themselves: then, ‘they find this a hard saying and they go back and walk no more with Him.’”

On the problems of human happiness:

“The chief cause of unhappiness is not suffering, but a certain intangible fear which casts a dark shadow on almost all human enterprises.”

“The Gospel, as the word implies, is the announcement to mankind of good news – viz., the news that happiness is placed within its reach… It was not a happiness deferred that Jesus promised to men. He guaranteed to alleviate the burdens of the human heart and bring it peace, even here and now.

“The road to happiness is through purification of the soul. Purification involves pain. The connection between the two is not arbitrarily established by God: it arises from man’s dual birth.”

“Christ’s philosophy of existence is that God is the unique source of happiness, being essentially happy. He concludes, therefore, that man can be happy only in the measure in which he captures God’s happiness. The way to this, He points out, lies through conquest of self-indulgence, self-exaltation and self-worship.”

The Tree of Life – Part II continues directly from the opening Scriptural quote, with ROM. V. 20, 21:

“Where sin abounded, grace did more abound: that as sin hath reigned to death, so also grace might reign by justice, unto life everlasting, through Jesus Christ, our Lord.”

Then the doctrines of Redemption, and the Mystical Body of Christ, are discussed; striking insights are presented and explained. We are also told, “There is in all men, by reason of the natural limitations of their being, an urge towards expansion and a desire of distinction. Following the instincts developed in him by original sin, man pursues a false road to greatness. Jesus came to give a right direction to this deep-seated instinct in man. He points out that a human person attains greatness, not by what he has, but by what he may become. An accumulation of earth’s goods adds nothing to a man’s personality. It is by growth of soul, not by acquisition of material goods, he becomes great.”

Expanding on this, he writes, “Life for man is a quest after the hidden God. God, for His part, furnishes man with indications by which he may find what he is seeking… God has not to be sought afar off. He may be found hidden in the ordinary things of life.” Yes, we’ve all heard that countless times but ponder it again.

The requirement of dying to self is presented in practical everyday terms, thus, “The good will of God is always extended to those who show themselves willing to accept God’s point of view and to forego their own. Great glory is given Him by those who seek their happiness along the path traced for them by their Maker rather than by the one they, with their shallow interpretation of life, select for themselves.” Giving great glory to God is primarily what our existence is all about, so let’s ponder that again.

The answer to that question and the title question, “Why the Cross?” make this a very valuable work to study and meditate on at length. Read it again and again with much profit, as is characteristic of Fr. Leen’s books.